Twenty-three Formula One (F1) cars, 800 horsepower V-8 engines spooling, it’s the start of the Monaco Grand Prix (GP). Deafening! Full ear protection is essential. Within the confines of the city of Monte Carlo, the towering hills a natural amphitheatre, magnify the sound of the race circuit. The idiosyncrasies of the Monaco GP circuit truly test drivers’ skills. Cars come to a virtual standstill on some hairpin corners, head through a tunnel and then accelerate to breakneck speeds on the straightaways. If a F1 race were to be proposed in Monaco today, it would be considered unsafe. Former world champion driver Nelson Piquet described driving in Monaco as, “like trying to cycle round your living room.” Click here to watch Ginger’s video.

In Monaco, track corners have their own names, such as Tabac, Louis Chiron, and Piscine. Many car aficionados only know the course by the names of the corners. Torrid action usually takes place at Sainte Devote, the turn located before the long uphill straightaway towards the Casino. This corner is named after the small church dedicated to a Christian martyr from the 4th century, whose treasured bones and thought to have protected the Monegasque locals from invasion for centuries. 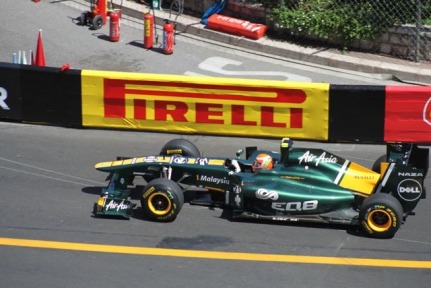 Not surprising given Ginger’s passion for speed that his “ European Top 10” list included a F1 race. He has had the thrill of flying above Mach 1 and has surpassed the speed limit in one sporty German automobile. Like most boys, he once envisioned driving a race car and reveling in the thrill of victory. Race car driving was not Ginger’s destiny. The next best thing was to witness a classic F1 car race, like Monaco.  Nutmeg felt auto racing was best included in the category of male bonding. Ginger needed a suitably minded playmate for this event. Who better than his brother-in-law Truffle?

Truffle was game and sought expert advice from Shamrock, a resident Monaco guru. Truffle would organize race day, and Ginger would take care of qualifying. Critical to the whole plan was organizing the post-race activities, and Shamrock had the inside track. Race week in Monaco, means exploring the city’s nightlife. Going out on the town requires appropriate transportation; Ferraris, Aston Martins, and Lamborghinis are commonplace. Hot on the heels of the Cannes Film Festival, fashionistas and models in designer outfits and stilettos, grace the choice establishments. Late-night Monaco is a perfect runway for race week attendees to strut their stuff. Essential, to the experience is access to the Sunday night party at the Amber Lounge. THE place where drivers and their posses are expected to visit to celebrate their achievements, and drown their sorrows.

Modern F1 car racing began in 1950, when standardized rule formats and cars were introduced. The original F1 race series had 7 stops; Britain, France, Belgium, Italy, Switzerland, Indianapolis and Monaco. The 2011 edition of the Monaco Grand Prix marked the 69th running of the race, and included 78 tours of the 3.34km race-course through the streets of Monte Carlo. This season, 12 teams are competing for the F1 championship with 25 drivers taking part in 19 races. Going into Monaco, Sebastian Vettel of team Red Bull Renault had won 3 of 4 races. A Vettel victory in Monaco would mean an insurmountable lead.  Challenging the Red Bull team, were the likes of Vodaphone McLaren – Mercedes team comprised of Lewis Hamilton and Jenson Button, as well as the Scuderia Ferrari Marlboro with Fernando Alonsa and Felipe Massa behind the wheel. 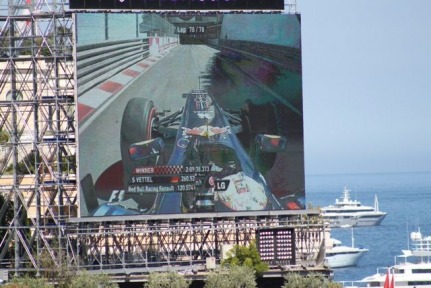 Pole position in Monaco is critical, as a lead at the start provides a distinct advantage due to limited passing opportunities. During the qualifying rounds, drivers push their boundaries to obtain the coveted pole position for Sunday’s race. Excitement builds over the course of the triple knockout rounds, three 15-minute races where drivers pursue the fastest time. All cars participate in the first round, the quickest 15 cars proceed to the second round, and the top 10 make the final heat. Hamilton had two exceptionally fast qualifying rounds and appeared to be heading for the pole. However, he entered late into the third qualifying round, bad-luck, as Sergio Perez of Team Sauber crashed at 300km/h coming out of the tunnel. Qualifying was red flagged for the Perez crash. Hamilton’s momentum came to a halt. Vettel had the fastest run prior to the red flag and secured his 5th pole position in 6 races.

Race day, Vettel bolted off the line and led for most of the event, making only one pit stop for the necessary tire changes. New rules mandate the tires the drivers use on the third round of the qualifying must be on the car for the start of the official race, and includes one obligatory change. Would his tires go the full distance? His lead was gradually eroding as his tires withered. Hot on his wheels, were Alonso (Ferrari) and Button (McLaren-Mercedes). Both drivers were taking chances late in the race, aggressively pushing Vettel to make a mistake. Fate intervened, with 6 laps to go hard charging Hamilton forced Renault’s Vitaly Petrov to crash. A red flag, the cars had to stop. A short respite, while accident carnage was removed. Vettel’s tires would probably stand up for the balance of the race. Another crash at Sainte Devote, yellow flag as a car was cherry picked off the race course. Green – 5 laps left, Alonso had lost momentum for an overtake. Vettel victorious with the checkered flag, a time of 2 hours, 9 minutes and 38 seconds. In the immortal words of F1 champion, Jackie Stewart, the 69th running of the Monaco Grand Prix proved to be, “a great day for motor car racing.” 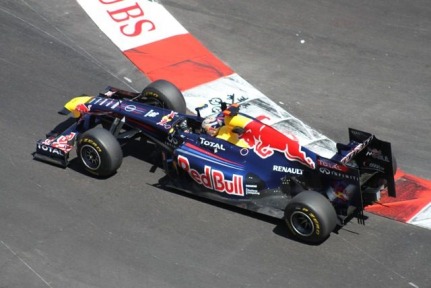 Off the race circuit, things were just beginning to heat up. Dinner at Zelo’s, followed by music and champagne at the Amber lounge. Bar star sightings included Hamilton, Rosberg, Alonso, Princess Bea (no wedding hat) and a bevy of Victoria secret models. With sunrise peaking into the Amber Lounge, the night came to an end. Ginger’s GP experience complete!