Calisson is a specialty candy from Aix en Provence made with almonds. There are several versions of the story surrounding how, and when this sweet treat was first made.

The French are certain the invention was theirs. It may have been as early as 1473 in honour of the King, Roi René’s second wedding, or later on as production, trade and development expanded. The first story involves a bride who was to be queen. She appeared dour, possibly unhappy with her lot in life. The tale whether true, or not, is that she smiled when she tasted candies. 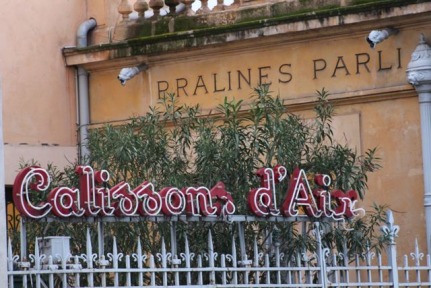 Those who do not believe the story of the smiling queen are more likely to believe that the recipe evolved around the time of the growth of almonds as a crop in Provence, during the 16th century.  However, the Italians would argue that they invented the calisone in medieval times as there is a reference to an almond cake by that name, found in Venice as early as 1275. Then again, kalitsounia, a candy made with marzipan, nuts and spices was found in the Greek island of Crete, once occupied by the Venetians.

There are so many stories about the origins of this candy that it is difficult to discern the facts. What is a fact is this candy remains a gourmet specialty of Aix en Provence.

In the 19th century, the first calisson factories were created, and by the beginning of the 20th century Aix was the world capital of the almond trade. Today, there is a group of twenty manufactures in the region that belong to the Aix Union of Calisson Makers, with the purpose of maintaining the traditional methods and ingredients. There are even some savoury versions sold today, although these cannot be officially called calisson. 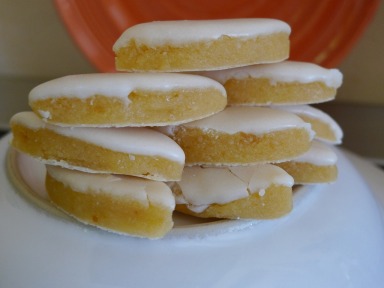 Nutmeg does not like marzipan, so she was skeptical about these candies, but then again “when in Rome”. The pleasant surprise was that the traditional calisson is actually, a delightful balance of almonds, sugar, melon and orange.

This candy continues to be a strong tradition in Aix, with many stores selling packages. There is even an annual mass, held on the first Sunday in September. For this occasion, many locals parade through the streets of Aix, in their traditional outfits to celebrate at the Cathedral of Saint Sauveur, for the blessing of the calissons. If you are in Aix or in Provence, do not miss an opportunity to try the calissons!

Here, is an adapted recipe for calissons from a friend and chef.

Print
Calisson from Aix (sweet almond candy)
Recipe type: Dessert
Cuisine: French
Prep time:  10 mins
Cook time:  1 hour 30 mins
Total time:  1 hour 40 mins
Serves: 20
This recipe was given to Nutmeg by her lovely friend Ghyslaine, who has tried and perfected it over the years. This is her version of the traditional candy. The Feuille d’hostie or unleavened host paper, is readily available in France. In other countries, you need to go to specialty cooking stores or Amazon (gourmet food section) for wafer paper.
Ingredients
Instructions
3.2.2265
Share the love.