Not too long ago Nutmeg was on a business trip to Charlotte, North Carolina.  It was one of those trips where you could have been pretty much anywhere as the agenda was something like this:

The second morning of the trip, Nutmeg decided to go for a run at 06:00am and was stunned by the intense activity on the main drag.  It turns out that day was the start of Charlotte’s BBQ and Blues and this is serious stuff. The vendor stands were set-up and the smoking had started big time at 6am!!  These folks are not worried about half-caf-skim-milk-no-foam lattes…. they are preparing rubs, injections and getting the temperature on their smokers “just right” for  Smokin’ Hot BBQ.   This whole scene was quite overwhelming for Nutmeg who likes berries, yogurt and granola along with her fancy latte at that hour in the morning.

Historically, smoking food (typically meat or fish) was done out of necessity, as it was a process that greatly extended the shelf life of the food.  This of course was long before refrigeration and preservatives.  This method of slow cooking was heavily used in may parts of the world, and still is in some areas.  The regional differences and associated tastes depend on the type of wood (oak, alder, hickory, mesquite, pecan etc.) or other base (sawdust, tea, corncobs, peat, sheep dung etc.) used in the process.  If that is not confusing enough food can be “hot-smoked”, “cold-smoked”, “wet-smoking” or “smoke-roasted”.   Regardless, this type of cooking is not for those looking for 30 minute one-pan recipes….start to finish in some cases this method could take as little as 12 hours to several days with cold smoking

Nutmeg would like to introduce her brother – Papa Que.  He lives in the Midwest and is being converted by his friends to embrace the art of smoking and all the associated trappings.  Papa Que owns a smoker, which consumes serious real estate in his backyard.  He orders ingredients for rubs and injections from dubious websites.  He has even gone so far as to go away on a boys trip to learn from the master Bad Bob, the king of BBQ. The boys spent two whole days in Tennessee (who really goes there?) learning the art from the master.  They smoked shrimp, chicken, pork shoulder, baby back ribs, whole hog and more.

Papa Que has done his research and now with had a solid level of practical experience, he and Sugar decided to throw a party.  Read on:

“We had a “Hillbilly’s and DaisyDuke’s” party with our friends last night, it was all because Papa Que wanted to smoke another butt and you need a crowd to feed. Anyhow lots of fun. And Papa-Que smoked some finger-licking ribs, bologna (ewe) and of course pulled pork that is quite tasty. The rest was catered by our friends and included such items as cheese whiz, Twinkies and canned sausages! No orzo, no feta, no gourmet items, just fill yur belly up! Drinks served in Mason jars. The kids played pin the tail on the cuts of cow and pig. No lace curtains last night!”

They certainly look the part: 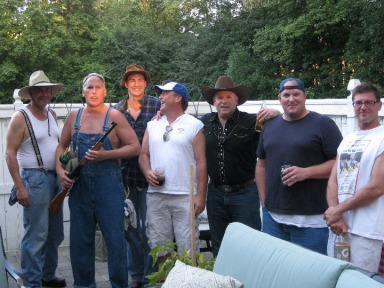 Next year Papa Que and his buddies may even try to go to Memphis in May, nirvana for Smokin’ Hot BBQ fans.  For now Papa Que has promised to share his recipe for Bologana and maybe even Sweet Tea (made with Fire Fly Vodka).  Stay tuned Nutmeg may even post these to the recipe collection.