As a way of getting acquainted with Provence, Ginger and Nutmeg treated themselves to a bike tour along with a good sampling of the local food and wine!  The tour started in St Tropez with a day of biking around that area.  It was beautiful and not too crowded, as the summer crowd was long gone.  The harbour and surrounding vistas were terrific. However, for Ginger the best part was Le Club Porsche de France was in town for the weekend and he was able to check out some real fancy cars. There were over 20 in our hotel alone and likely over 300 in the whole town – quite a show! 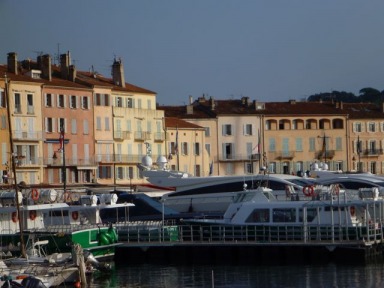 After St Tropez we headed to Uzes by van.  The weather was not very cooperative for the drive, with heavy wind and rain.  Uzes is the first French Duchy; the medieval town was expanded in the 17th century and is still well preserved today. The town was at one time very well known for its’ silk and linen production.

The next morning was still pretty damp so we headed to the UNESCO World Heritage Site, Le Pont du Gard, by van for a tour.  The museum is well worth a visit – plan to spend at least a couple hours.  The Pont de Gard was part of a Roman envisioned and engineered, 50 kilometre aqueduct system.  The system which started in Uzes, carried spring water to the city of Nimes via a series of underground channels and aqueducts  The exact timing of construction is still debated, although recent excavations have placed the work in the early part of the first century AD.  The full aqueduct was an engineering marvel, given the fact that it was built over 2000 years ago.  The spring water travelled over 50km, the gradient was 34cm/km (1:3000), it descended 17m vertically in the entire length, and carried a daily flow of 20,000 cubic meters or 44 million gallons.  The aqueduct system was fully functional for about 200 years, after which lack of maintenance created lime build-up and eventually in the 9th century it was no longer used.  The Pont du Gard was the most ambitious of all crossings; it stands 49m high and was 275m long.  A photo of this incredible structure is below and more can be found in the galleries (just click). 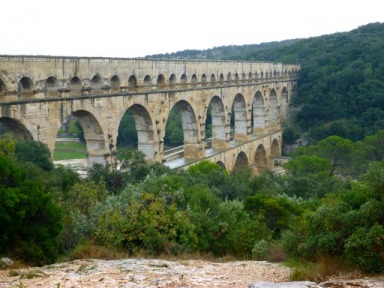 The balance of the bike trip took Ginger, Nutmeg and Jade (one very lucky dog) to Arles and St Remy.  The cycling was fantastic, through vineyards, apple orchards, olive groves, the Garrigues (desert landscape with limestone outcroppings), cornfields, sunflowers fields etc.  Of course the cycling included several stops in cafes, a couple picnics, some great dinners and a fair volume of local wine (none of that Italian stuff). It was fantastic.

However, Nutmeg is still amazed that this beautiful country with such a depth of history and focus on engineering, you can still find “the dreaded euro-shower” (Click to see a previous post for more detail).  Along our bike journey we were treated to a couple classic versions, see photo below: 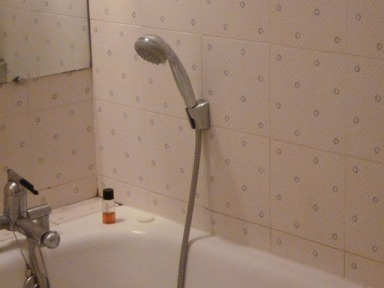 There is hope though – out of 11 nights, Nutmeg gave the “thumbs-up” to two showers.