A day with the Patrouille de France 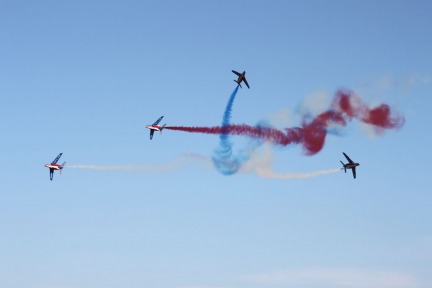 Eight military jets performing loops with tricolor smoke over the highway can be distracting. These jets are the Patrouille de France, the French equivalent of the Canadian Snowbirds. Through an affiliation with the Canadian Air Force, Ginger was able to get an introduction to l’Armée de l’Air (the French Air Force). Ginger was ecstatic when he learned of the opportunity to visit with this prestigious team.

The French Air Force was formed in 1909; it is currently the fourth largest air force in NATO with over 865 aircraft.  Within l’Armée de l’Air there are two demonstration teams, who are ambassadors of the skies for the nation. The two teams are: the Équipe de Voltige; the World and European Aerobatic Champions, and the Patrouille de France. Both teams practice out of the 701 Air Base in Salon de Provence, which is also home to l’Ecole de l’Air (primary officers training school). This French defense facility predates World War II. Base Aérienne 701 is home to a French military pilot’s first flight training which begins with non-powered gliders, and then moves to propeller driven aircraft. 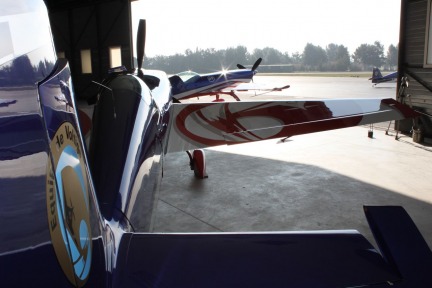 Capitaine Stéphane Azou, the public relations officer for the two teams, met Ginger and Nutmeg. The first part of the day involved meeting the Équipe de Voltige. As it should be, introductions were made over a cup of espresso. The commanding officer of the team; Capitaine Fabrice Camliti, provided a tour of the hangar and a quick overview of the coveted airplane, the Extra 330SC. This is a single seat propeller driven aircraft that boasts 330 horsepower, enough power that it can hover in a stationary position in like a helicopter. Effectively, this airplane is the equivalent of a Formula One car for the skies, preferred by aerobatic pilots around the world.

From outside the hangar, an engine roared to life, one of the Extra’s was rearing to get airborne. Capitaine Pierre Varloteaux, for his 40th birthday, was about to put the plane through its paces. To become world aerobatic champions pilots are required to perform a choreographed ballet in the air within a 1-kilometer box. A pilot is required to perform certain mandatory elements, and is also expected to perform a freestyle routine, which tests the pilot’s creativity and daring!  For close to thirty minutes Cne Varloteaux pushed the limits of flight, with a series of intricate aerobatic maneuvers. A lasting memory of the visit was etched in Ginger’s pilot logbook.

The next part of the tour led to the inner sanctum of the Patrouille de France, also known as the Patrouille Acrobatique de France (PAF). The history of the team is as important as the strength of the team today. A cornerstone photo is of the founding team of pilots in 1953 overlooking the picture of the 2010 team. Ginger and Nutmeg were escorted to the squadron lounge where photographs and artists sketches adorned the walls. Photos of the patrons of the team include: Jean-Claude Killy, sportscaster Michel Drucker, and France’s first lady Carla Bruni Sarkozy. The patrons are important to the team, as they are spokespersons and ambassadors for the team. 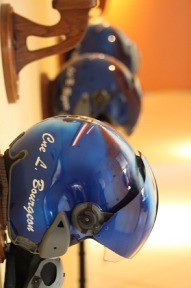 When the Patrouille began in 1953, it started with four F-84 fighter jets, then progressed to the distinctive V-tailed Fouga Magister jet with nine aircraft. In 1981, the team transitioned to the tandem seat Dassault/Dornier Alpha Jet; a joint French/German aerospace project, which is a twin-engine light attack jet and advanced trainer. The Alpha Jet is able to perform extensive aerobatic manoeuvres; it is used globally for both training and air show purposes by multiple nations.

One of the most apparent features of both teams, the Patrouille and the Voltige was their pride of aircraft. The Patrouille has used the Alpha Jet for thirty years and the air-frames still look brand new. The mechanics and support personnel must be commended for a job well done, or in military speak Bravo-Zulu, for ensuring the serviceability of the aircraft and the pilots’ safety in the air.

Ginger and Nutmeg were then taken to the pilot’s briefing room, and witnessed the pre-flight routine of the Patrouille. The preparation was incredible; weather was checked, frequencies determined, and emergency procedures reviewed. Then a ballet of pilot’s hands commenced (the music of the upcoming flight). Before every flight; both practice and performance, the pilots visualize the upcoming procedures, and they memorize exactly what they will execute in the air (timing, smoke, solo passes, radio calls).

The pilots moved to their planes. Taxi. Take-off – four planes abreast on the runway. The Bleu, Blanc and Rouge of the French Tricolor came out in their glory as the pilots in their aircraft performed a magical delight in the air. Once back on the ground the pilots debrief the performance and discuss adjustments. Both Nutmeg and Ginger were truly entertained by this thrilling performance, and the unbelievable hospitality that was accorded by these two amazing French aerobatic teams. They are truly ambassadors of the skies for their nation. 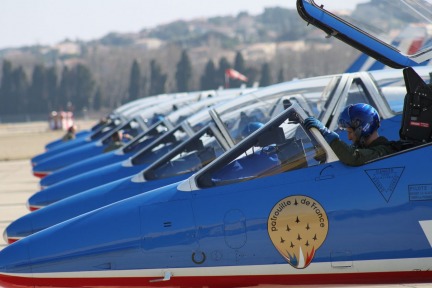