According to Nutmeg, the Mimosa in cocktail form, does not do justice to either of it’s ingredients; champagne or orange juice.  It is often served for brunch and that is a whole other story (see previous blog post).

This post is about the first flower of the season in Provence.

The mimosa is a beautiful flowering bush that is often found in gardens, green-spaces, and forests all over the south of France. There are over 1200 varieties world-wide, the shrub is native to Australia, Central and South America and parts of Asia, not France. It is believed that the mimosa plant travelled to Europe on one of Captain Cook’s voyages. This flowering beauty was introduced to southern France around 1850, by wealthy English, who planted them to in order to brighten-up their gardens during the winter months on the Cote D’Azur.

Although, there are several mimosa varieties in the region they all typically flower between mid-January and mid-March. The region celebrates this early explosion of colour with a number of events, typically centred around the villages that form La Route du Mimosa.  The eight villages include: Bormes-les-Mimosas, le Rayol-Canadel, Sainte-Maxime, Saint-Raphaël, Tanneron, Grasse, Pégomas, and Mandelieu-la Napoule a 130 kilometer “trail”.

Ginger could not think of a better way to spend a Sunday than driving along small crowded roads to take pictures of flowering yellow bushes. He was a good sport though, and agreed to the adventure when Nutmeg confirmed there would be lunch along the way. 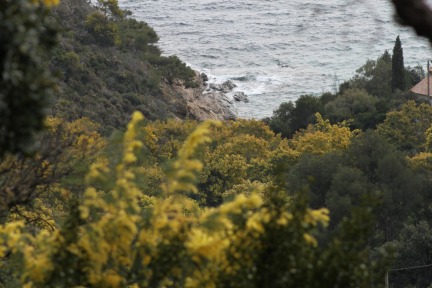 Heading out from Aix this is the typical route:

The mimosas are beautiful and have a nice perfume but after four villages of flowering trees, crowded roads full of Sunday drivers and cycling teams it was time for lunch. The challenge was it was Sunday, a school holiday week and there were many mimosa seekers on the coast.  So lunch was a from a very uninteresting boulangerie with a view of the parking lot. Ginger and Nutmeg returned to Aix-en-Provence via the fast route – enough flowers and perfume for one day!

Note: The coastline is beautiful and some of the villages are very interesting.  There are some walks and more challenging hikes along the route.  The villages have created a busy calendar of events to celebrate the season. Our recommendation is either to spend a few days on the coast and enjoy the sites or do the Route du Mimosa in a couple of day-trips.  It would have been possible to do the whole trip in a day but Ginger may not have been talking at the end.