There are several brands that epitomize Italian style, one that is known worldwide is Ferrari. Boys of all ages, have visions of racing in the streets of Monaco in a red sports car. Bright red is truly one of the distinctive traits of the Ferrari automobiles, a patented colour, “Rosso Corsa,” or Italian racing red. In fact, red is the international color for all Italian race cars, while the French use blue, and the English defaulted to British racing car green. On a recent visit to Bologna, Ginger and Nutmeg made a small side-trip to Galleri Ferrari, the official Ferrari museum located in Maranello, to experience these magnificent machines up close.

Aside from distinctive color the Ferrari coat of arms, a bright black stallion prancing on a yellow embossed background, is iconic. History surrounds the emblem: the black stallion symbolizing the Piedmonte Reale Cavalleria which World War One, Italian flying ace Francesco Baracca had painted on his fighter plane. Ferrari originally received approval to use the prancing stallion on its cars from Countess Baracca who suggested it would bring luck in car races. Yellow is the official color of Modena, an Italian province in the Emilia-Romagna region of Italy. Modena has been deemed the “Supercar Capital” as it has been home to carmakers Ferrari, Maserati, Lamborgini, and Bugatti. Two scripted letters “S” and “F” are also included on the logo and are important as they signify Scuderia Ferrari, or the “Ferrari Stable.” The stable got its roots in 1928 as a collective of amateur race car drivers led by Enzo Ferrari. The crest is an appropriate coat of arms for such a legacy of great automobiles, which have been built with ever increasing horsepower. 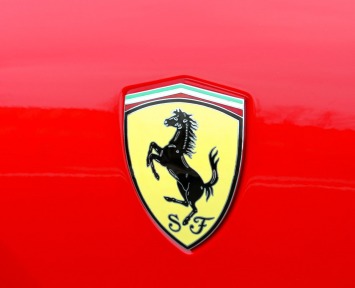 Ferrari has been handcrafting automobiles since 1947 with the introduction of the Dalla 125S, however the roots of the organization date back earlier. Enzo Ferrari, originally a driver, started building racecars for Alpha Romeo in 1938. Maranello, is home to the Ferrari automobile factory and Fiorano test track. In the 1990’s the factory underwent a major transformation entitled: “Formula Uomo,” which was designed to create an ever-evolving state of the art facility focused on sustainability, efficiency and ergonomics. Two of the most unique buildings are the Galleria del Vento (Wind Tunnel), and the Linee Assemblaggio Vetture (Car Assembly Lines), both of which were designed by award winning architects, and further Ferrari’s focus towards cutting edge design.

Ferrari racecars have been developed for Formula 1 for over 60 years. Ferrari entered the first Formula 1 car race, and have maintained an uninterrupted presence ever since. One of the highlights of the Ferrari museum is the Hall of Victories, where trophies from some of the 210 Grand Prix victories are located. Housed in a semi-circle are seven of the championship Formula 1 cars. To date Ferrari has had 16 World Constructors’ Championships, and 15 World Champion Drivers’ Titles, it is the most successful team in the history of Formula 1 racing. Included in the “SF” stable is; Michael Schumacher, the most successful Formula 1 car driver in history who achieved 5 consecutive Formula 1 drivers’ titles while driving for Ferrari. 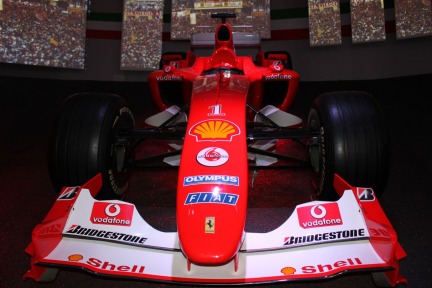 Within the museum, a number of the most sought after grand touring automobiles are on display. Cars from each of the various decades of Ferrari has been manufacturing automobiles are shown, including: 166 Inter (1949), 750 Monza (1954), 275 GTB/4 (1967), Dino 246 GT (1970), F40 (1987), F50 (1995). One of the most unique cars is the 2002 Enzo, which was dedicated to the company’s founder, it is effectively a street legal Formula 1 car. Only 399 Enzos were ever built, and they possessed a number of the design features developed for Formula 1 including ground effect aerodynamics, and composite materials. With 660 horsepower the top speed of the Enzo was over 350km/hr and accelerated to 100km/hr in 3.65 seconds. 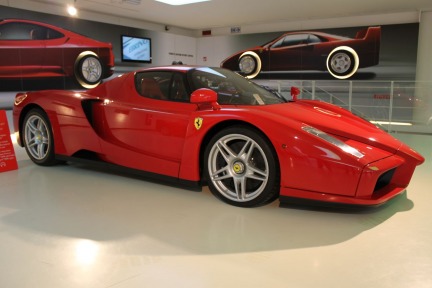 A Ferrari is one of those things that little boys dream of driving at some point in their lives. Ginger figured at least a test drive was in order. The vehicle of choice was the 458 Italia, originally introduced in 2009. Powering the Italia is a 4,499cc 8-cylinder engine capable of 560 horsepower. In keeping with trying to do his part for global warming, Ginger chose the Ferrari with the most fuel-efficient engine produced to date. With a turn of a key and a push of the ignition button Ginger was treated to a throaty growl, a rumble in the seat, and the illumination of the incandescent dashboard instrumentation. Maurizio the keeper of the car, suggested using the automatic feature of the car before advancing to the gear paddles. Maranella is a small Italian town, with speed limits posted of 50km/hr and 70 km/hr, Maurizio an ex-moto racer said not to be worried as there are usually no police, and to give the car a try. Ginger hit the throttle, the red rocket ship took off and the acceleration was amazing 0 to 100km/hr in 3.4 seconds. After 5 minutes of fun, Maurizio deemed Ginger worthy enough to give the paddles a try. First in line the stoplight advanced to green and Ginger hammered the throttle, paddled into 2nd and then clicked into 3rd, within an instant the Italia indicated 135km/hr on the speedometer, please let there be no cops around! Luckily there were no cops, time to return to the starting point, Ginger’s Ferrari experience was coming to an end.

Ferrari is a pure unadulterated example of how all truly amazing sports cars should be built and Galleria Ferrari is a shrine to all things Ferrari. It is worth a visit if you are close to Maranella. Check out the latest video: Ferrari. 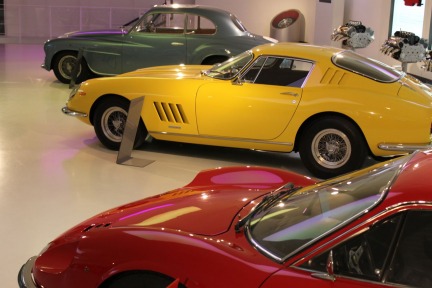