A couple years ago Nutmeg had the pleasure of biking through Tuscany with a group of friends. Ginger was at school so he was not able to participate.  The moment Nutmeg arrived at their beautiful bed and breakfast accommodation, in the middle of a vineyard; she knew that Ginger must visit Tuscany.  Anyone who loves wine, history and beautiful countryside should visit, and fall in love with Tuscany in their lifetime.  Ginger and Nutmeg set-off on an early season (April) visit to explore Tuscany.  At this time of year the fields are only just starting to turn green and the gnarled grapevines are showing their first shoots. 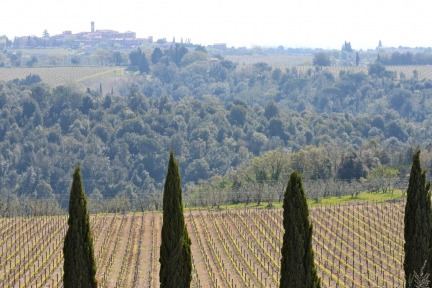 So what is Tuscany all about? Wine, History and Countryside

Wine is serious business in Italy, after France the Italians can boast about the second largest production (by volume) worldwide.  Italians also love to drink wine, with the highest worldwide per capita consumption. Grapevines have been growing in Italy and parts of Europe for millennia, however organized cultivation started under the Greeks, with recorded viticulture in Sicily around 800BC.  In modern day Italy there is a classification system with four categories, two for table wine and two for “Quality Wine Produced in a Specific Region”.  There are twenty wine growing regions in Italy, among which thirteen areas produce thirty-six of the Denominazione di Origine Controllata e Garantita (DOCG) wines, these are the more sought-after and typically more expensive wines.  Needless to say Ginger and Nutmeg sampled a few bottles during their visit.

The historical roots in Tuscany are very deep.  With only a couple short days in the region G&N were able to visit Siena (Italian spelling), Montepulicano and San Gimignano, and even that was a blistering pace.  Siena alone deserves a long visit; the historic centre is a UNESCO World Heritage site.  The historical centre is not large and easily visited on foot.  Every visitor must see Piazza dell Campo, the large shell shaped public space dates from the 13th century and it is where the Palio (horse race) is held on two summer dates ever year.  The other key site of interest is the Duomo (Cathedral), this impressive large scale 13th century church is well preserved and the crowds of visitors are now controlled, as you must buy a combined ticket to gain access to the buildings and the panoramic view point.  The ticket is well worth the price and does seem to control the crowd flow in one of the most visited cities in Italy.  Here is the view from the top: 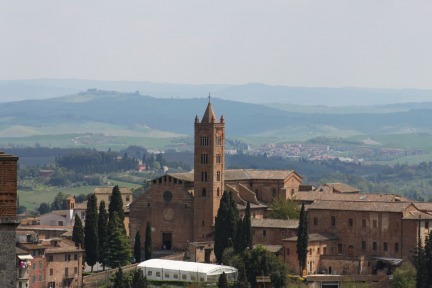 Siena is a city of symbols; at every turn is a plaque or tile indicating the Contrada territories or districts.  There remain seventeen Contrade today, formerly there were fifty-nine.  The realities of the administration of mini-cities have forced consolidation over the years.  The remaining contrade are able to participate in the Palio horse race around the Piazza del Campo on July 2nd and August 16th according to the rules. Although, G&N have not been in the city for the Palio they have friends who can vouch for the wild atmosphere surrounding the event and the associated celebrations.

Montepulicano and San Gimignano are both very well preserved ancient towns.  Montepulicano dates from 308 BC and requires a good pair of walking shoes to get to the top of the village.  The walk to the top is rewarded by stunning views.  San Gimignano is also UNESCO Architectural World Heritage site. The town once had seventy-two towers, where eight remain today.  There was a settlement in the current site between 200-300BC.  The town reached its pinnacle at about 1300 prior to the Black Plague.  The town remains beautiful, although a shadow of its former glory.  However, San Gimignano is really crowded with tourists and almost unpleasant as a result.

Ginger quickly figured out that a short visit to Tuscany does nothing other than stoke the appetite for more.  The countryside is a series of rolling hills, covered in pine forests, vineyards and endless olive trees.  The sun in Tuscany plays on the on the undulating landscape to provide an ever changing marvelous feast for the eyes. Enjoy some more photos from our gallery here. 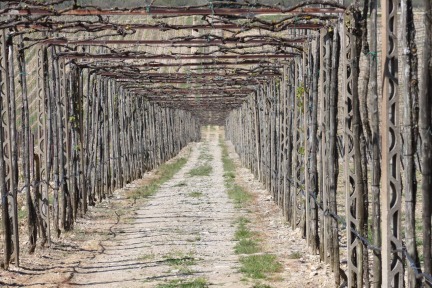 In the end a “Tuscany Sampler” was great for confirming more time is required to soak up the sights, enjoy the wine and local specialties. Ginger and Nutmeg will be back soon!