Pisa Italy Not to be Missed

Ginger does most of the driving when the duo is “on the road”. In an effort to break up a longer drive he decided that an overnight stay in Pisa would be a good idea, so he found a great little hotel in the historic centre.  Nutmeg had been to Pisa in the 1980’s involving a quick trip from Florence on the train for dinner.  The idea was to take the late afternoon train, allow some time for a few quick photos of the famous Leaning Tower or Campanile (bell tower for the Cathedral) and allow more time for dinner and beverages.  Nutmeg will admit that her memory may be the odd bit fuzzy but at that time the tower was interesting, the grounds were crowded and the rest of the site under-promoted.

Things have changed in Pisa, since Nutmeg’s last visit. The Leaning Tower and the rest of the site were designated a UNESCO World Heritage Site in 1987.  The tower remains today on the National Geographic “7 Wonders of the Middle Ages” list.  Visitor access to the tower had been stopped years ago to prevent further erosion; it is now open on a limited basis. The not-for-profit Opera Della Primaziale Pisana (OPA) manages the whole site today.  Visitors are able to walk around the buildings in “Miracle Square” however can only gain access to these beautiful structures with a ticket.  There two ticket variations, with or without the tower visit.  G&N chose without, as the wait to go up the tower was 3 1/2 hours – so go early if you are really keen to get a view from the top of the tower. 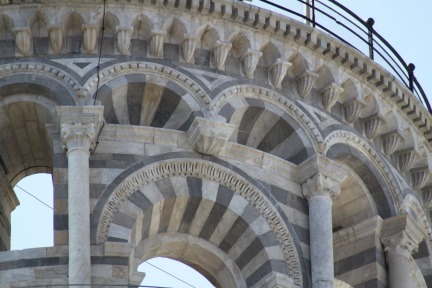 The Piazza del Duomo lies to the North West of the city centre.  The Piazza buildings include: the Cathedral (Duomo), the Baptistery, the Leaning Tower and the Camposanto (cemetery).  There is reference to this site as the location for the Church of Pisa before Constantine’s peace pact in 313.  Historical research has determined that in fact the site enjoyed a much more prominent location in the city during the Etruscan and late Roman age, during that time the Auser River flowed near the square and would have provided access to the sea.  The Auser River ceased to flow at some point in the last millennium and the city centre of Pisa has gravitated to the other side of the Arno River.  The nature of this urban development has created a unique historical site in a park like setting.

Sacred buildings from the Etruscan era were destroyed and replaced by the middle age structures, which stand on the site today. The Duomo (Cathedral) was started in 1063, it is an important example of Pisan style of architecture and the ceiling is stunning.  The circular baptistery was started in 1152 and the entry lines up with that of the cathedral.  The bell tower (Campanile) was started in 1173, it commenced leaning when the structure reached 10 1/2 meters.  The Campanile was eventually completed around 1301 but due to poor substructure has continued to move over the years.  The Camposanto was started in 1278 and completed in the 15th century.  The entire site has been challenged over the years by natural and man-made causes, the soil condition under the tower, a fire in the Duomo in 1595 and the Camposanto roof and sculptures were destroyed in 1944 during the Second World War. 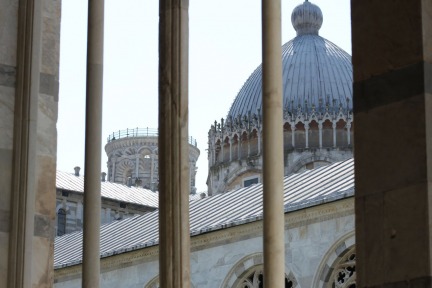 G&N made their visit to Pisa early in the season before Easter and the summer crowds.  The site was still very crowded, although the combined OPA ticket does provide a bit of crowd control within the structures, it does nothing for the thronging masses jockeying for a location to take crazy photos of their friends holding up the tower. Nutmeg was not interested in those antics and could only imagine the chaos in the height of tourist season.  There is some respite available on the edges of the square, in two museums the Museo delle Sinopie and Museo dell’Opera del Duomo available on the same combined ticket.  These two small buildings house actual pieces from the site including the sinopie or artist sketches of the frescos in the Camposanto.

In the end Pisa should not be missed.  The small city can easily be accessed as a day trip from Florence but really deserves a slightly longer visit.  Be aware like all attractions, there are questionable merchants, marginal tourist menus and lots of hawkers selling junk. You can see more photos in our Tuscany Sampler Gallery (just click).