Nutmeg’s “Top 10” list for Provence included a visit to the Gorges du Verdon. This magnificent area is sometimes referred to as the Grand Canyon du Verdon, due to the natural chasm formed by the river. The turquoise-green Verdon River cuts a meandering path along the steep, limestone cliffs. The length of the gorge is roughly 25 kilometres (km), and at certain points, the cliffs reach 700m (2,300ft) in height.

The Gorges du Verdon is certainly extraordinary, but the comparison to the Grand Canyon might be an exaggeration. The Grand Canyon is 446km long, 29km across at its widest point and reaches depths of 1,800m (6000 ft). 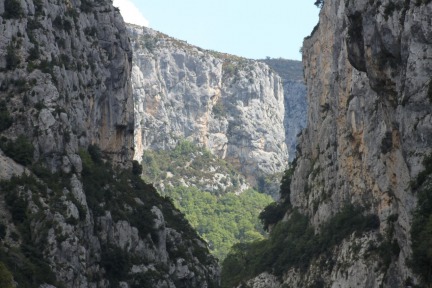 The regional park of Verdon (Parc Naturel Régional du Verdon) incorporates 43 towns. It has only been officially designated as a park since 1997. However, there has been recorded human presence in the area for 30,000 years. With the passage of time Moorish invasions, the plague and economic challenges have all impacted the small villages and local residents. All the while, the Verdon River has continued to mark its course, creating unique rock formations like the Styx. The Parc Naturel Régional du Verdon offers is a paradise for those who are sporty types with; hiking, climbing (1,500 routes), kayaking, canyoning, mountain biking and paragliding. 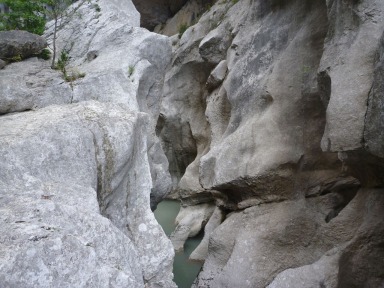 One of the popular towns in the area is Moustiers Saint-Marie. This town has been a pilgrimage site since the Vth century. There are several churches, however, Notre Dame de Beauvoir located on the hill above the town is the most iconic. The village is also a pilgrimage site, of sorts, for those looking for the famous Faïence ceramics. There are over 30 stores and workshops in a small geographic area.  Moustiers Sainte-Marie sits on a ridge below steep cliffs, the setting is beautiful, and the pedestrian-only streets are attractive. However, this is a place that clearly caters to tourists, busloads of them, so you should not expect a peaceful, solitary visit. 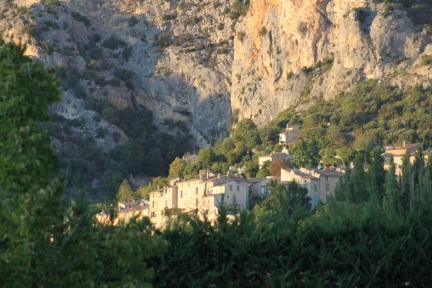 Nutmeg booked a surprise trip to the Gorges du Verdon for Ginger’s birthday.  She was sure that he would be happy to tick a box on her to do list, for his birthday present. The plan was to walk the Sentier de Martel, which is the classic hike on the Verdon. However, that was not in the cards, as the trail had closed the day before for seasonal repairs (sounds a bit like their Cinque Terre holiday).  Nutmeg was not ready to admit defeat. Instead, she chose to have a massage, while Ginger sorted out the hiking details for the next day. Ginger decided upon the Sentier de l’Imbut, a 10 km trail that is a close rival to the Sentier de Martel for vistas and unusual rock features. 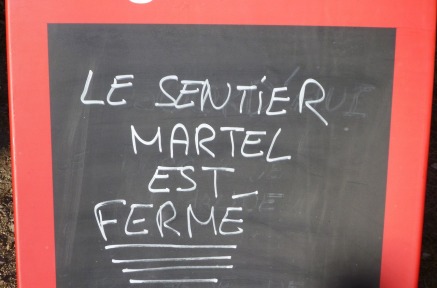 Ginger and Nutmeg were fortunate to hike on a cloudless, windless day. The hike was certainly challenging enough for their first of the fall season. The route included; ladders, ledges, ropes and steep ascents.  It was a rewarding day on the Gorgeous Verdon, and it is still on Nutmeg’s list for a return visit.  If you want to see more photos click here. 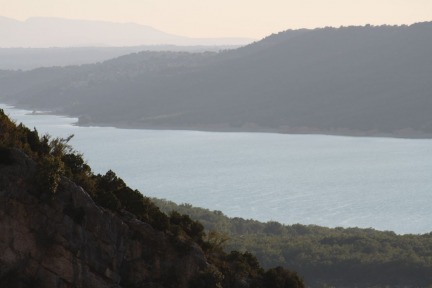