Nutmeg has a friend who is interested in really big construction projects. He had previously visited the site of the Malpasset Dam outside Fréjus and recommended a visit to the site as an interesting road-trip.

The Malpasset Dam was an enormous initiative completed in 1954. It collapsed less than five years later, on December 2, 1959. The dam on the Reyan River was arched in design, or more technically a double curvature with a variable radius.  The dam height was 60 meters, 6.78 meters at the foundation and the length of the crest was 223 meters.   The history of the dam is a bit unclear as some reports have work starting in 1941, possibly early planning that was very likely disrupted by World War II. In 1946, there were geological and hydrological studies undertaken. There is now some question about the quality of the engineering studies, due to lack of proper funding. Construction work on the dam started in April 1952, the work was halted a few times due to labour strikes. The final cost of the project in 1955 dollars was 580 million francs. The statistics are all below: 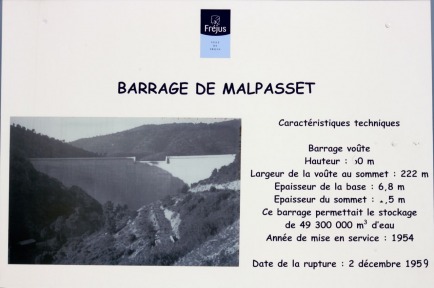 The breach in the structure occurred on December 2, 1959 at 21:13.  The wall collapsed and created a wall of water (a dam break wave) the was 40 meters high.  When the wave reached Fréjus 20 minutes later and 7 kilometres down the valley, the wave height was still 3 meters high. The villages of Malpasset and Bozon were destroyed.  The adjacent highway construction site, several small roads and railway tracks were all ruined. The number killed seems to vary but the most consistent number is 421 dead.

The investigations determined the cause was a tectonic fault, not noticed previously due to its distance from the structure. According to records or rumour, there were cracking noises observed but not investigated and the right side of the dam experienced some leaks in November 1959. In addition, there were heavy rains prior to the failure, raising the water level by some 5 meters; this may have been a contributing factor.  Experts in the field still maintain that the design of the dam was appropriate and would be much the same today. The photos below are what remain at the dam site today. 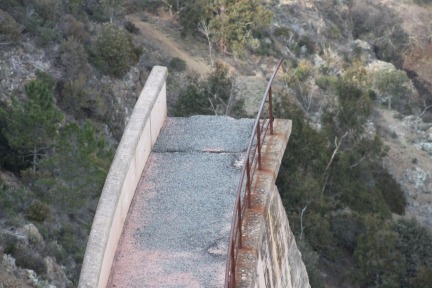 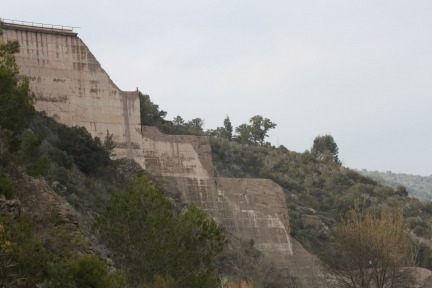 Lest we forget – a sobering reminder at the entry to the park: