Blinded by the hues of lavender shutters.

Gently numbed by a glass or two of chilled local rosé.

It would be easy to overlook the hamlet of Mérindol during a visit to Provence.

The Luberon region is brimming with villages laying claim to le plus beau village de France (most beautiful village in France) and many of those proudly display Villages Fleuris (flowering villages) emblems on street signs. 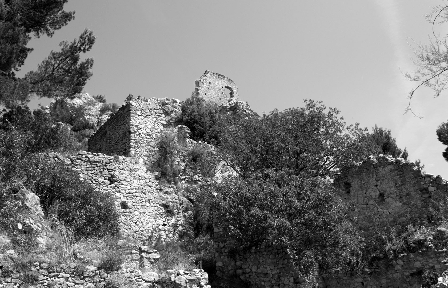 Located on the edge of the leafy Luberon massif, the town’s population barely touches 2,000 people. Mérindol is hardly a notable exit off the D973, a stretch of highway between the larger centres of Cavaillon and Pertuis, respectively known for their juicy orange melons and tricolour wine production.

Mérindol is known for a 1545 massacre!

The remains of the ancient village are deeply-rooted on a rocky outcrop. A faded sign marks the path indicating in classic French style – proceed at your own risk. Missing the fine print typical in North American, it is left unsaid that appropriate footwear is recommended and that ruins from the tenth century are not safe for scaling.

Vaudois or Waldenses were the common names of a Christian reform movement, initially based out of Lyon in the 1170s. Peter Waldo or Valdo, a prosperous Lyonnais merchant, sold his belongings and began preaching the benefits of a focus on core Christian beliefs. The foundation for this association was a return to a lifestyle of simplistic needs and devotion to God as outlined in the Gospel of the New Testament.

The Vaudois gained advocates in Provence, in an era that coincided with the rise of the Catholic Church’s power in France. Threatened – the Catholic Church declared the Vaudois heretics in 1215.  Between 1309 and 1378, there were seven powerful Catholic Popes residing in Avignon, this Vaudois reform movement was at best an annoyance.

Tensions rose between the two spiritual tangents driving the Vaudois to veil their activities and seek cover in fortified towns of the Luberon valley. On November 18th 1540, the influential Parliament of Provence located in Aix-en-Provence issued the “Arrêt de Mérindol” (Stop Mérindol). Despite numerous appeals King Francis I confirmed the judgment in 1545, and in April of that same year the Vaudois were attacked.

The aggressive incursions were led by Baron Jean Maynier d’Oppède (President of the parliament of Provence) and Antoine Escalin des Aimars (military commander). At least 23 villages were reduced to rubble; deliberate fires engulfed homes, and lives were shredded as callous troops ravaged everything in their path. A senseless slaughter, it is believed that thousands of Vaudois died, and any survivors were tortured by horrific means.

Mérindol was a pile of ashes.

From the initial signpost, it is no more than a 10-minute walk to the crest of the hill, the site of the ancient village. Not much remains other than a few wall sections of crumbling, rough field stone. Spend a peaceful moment on the summit enjoying the commanding view of the Luberon and the Durance River. It is a Provencal view that should not be missed and a dark history that should be acknowledged. 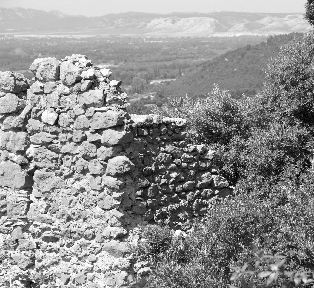