Ginger used to think Alberta Taber corn was pretty good, then he moved out east to work in the “big smoke” aka Toronto and realized he was mistaken.  He would often borrow Nutmeg’s car and drive to Buttonville airport for flying lessons.  On his way back home, he would stop at a farmer’s road side stand and load up with the freshest seasonal corn and tomatoes.  The corn (peaches and cream variety) was literally fresh picked that day and the tomatoes were to die for.  So dinner was easy…peel the corn cobs, boil until just right and serve with sliced tomatoes.  Yum! 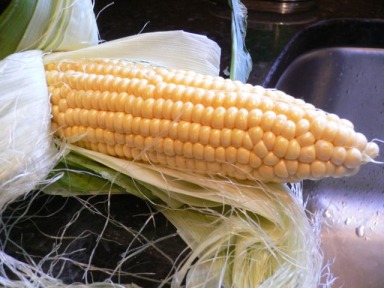 Corn like many crops has a long history.  Corn is the English translation for maize, it is a grass that was domesticated in what is now Central America, during prehistoric times. Initially cultivated by the Aztecs and the Mayans, it later spread through much of the Americas by 1700 A.D..  Explorers carried maize back to Europe and introduced it to other countries through trade.  Corn (Maize) is widely grown in the Americas (combined US and Canadian production is the largest in the world).  The use and cooking methods vary here are some:

Corn is rich in phosphorus, magnesium, zinc, iron and vitamin B.  It has traces of other minerals and vitamins.  There are no particular health benefits although it is good for digestion, low cholesterol and skin care.

Sugar is Nutmeg’s sister in law.  She loves all things Mexican and corn in particular.  Here is one of her recipes for  Corn and Black Bean Salad.

Print
Corn and Black Bean Salad
Recipe type: Salad
Prep time:  10 mins
Cook time:  10 mins
Total time:  20 mins
Serves: 4-6
This is a super easy salad, very tasty and good for you. Serve as a side on a summer barbecue night.

Ingredients
Instructions
3.2.2499
It’s corn season get out there and enjoy it!
Share the love.