Ginger and Nutmeg chose the Italian Dolimites for some skiing in early March. They were able to schedule their trip just after the winter school break so the crowds were light.  The problem was the snow was ‘light’ as well.  So there was nothing but groomed trails, which suited Nutmeg just fine. They chose the resorts of Cortina and Corvara/Alta-Badia, as Ginger wanted to ski a couple of the classic Olympic and World-Cup pitches.

The Dolomites landscape is incredibly spectacular.  One is struck immediately by the range of colours from pine forests and meadows to rocky spires and limestone walls (some of the highest in the world).  In 2009, the Dolimites were declared a UNESCO Natural Heritage site and it is easy to see why as every viewpoint is more spectacular, than the last. This area is an outdoor playground all year round, attracting skiers, ski-touring, climbers, hikers, bikers and para-gliders, among others. There has been recorded climbing in the region since 1887. 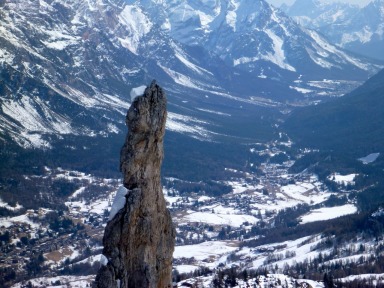 This “playground” has a checkered past. The region was annexed by Napoleon during his rule from 1805-14, and then contested again during World War One, between the Italians and the Austro-Hungarians forces.  The border lines were re-drawn at the conclusion of the war in 1918 and this part of the world officially became Italian.  To this day it remains unique in Italy for cuisine and language, the food is heavily influenced by Austrian tradition and the official languages of South Tyrol are Austro-Bavarian (German), Italian and Ladin. Those interested in war history can visit on skis or on foot several remaining significant war sites.

The first stop was Cortina d’Ampezzo for two nights.  This small town was host to the 1956 Olympics and has been the film location for some famous movies, including the James Bond film For Your Eyes Only. The name Cortina d’Ampezzo translates into (Graveyard of Ampezzo), thankfully that has little impact on today’s stunning sights, but remains a nod to the past struggles in the region. The village is tiny, with roughly 6200 permanent residents. The town is centred around a pedestrian only strip of high-end and sporting retail, restaurants and a few cafes.  The centre of the strip is anchored by a striking steeple and the Church of Saints Filippo and Giacomo. 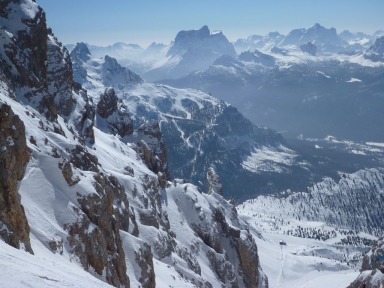 Two days of skiing, incredible views and great food, it was time to move on to Corvara/Alta-Badia.  Corvara forms part of the “Dolimiti Superski”: 12 interconnected ski areas, 1200Km of slopes hundreds of lifts.  The vistas change considerably between Cortina and Corvara, the peaks are not as rugged and the views (according to one Italian and seconded by Nutmeg) are not as spectacular. What Corvara might lack in views it makes up for in accommodation, gourmet food, on-hill services, skiing for all levels, options for non-skiers and in the summer the Maratona dles Dolomites (a seven peak bike race). 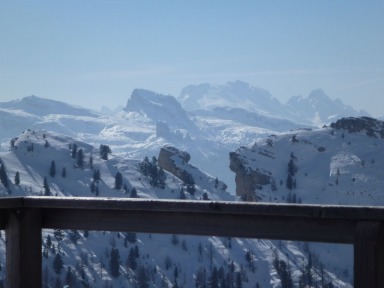 Corvara like many other resorts started as a climbing area in the late 1800s.  The ski school started after World War One and the first lift was operational in 1938.  The name Corvara is of latin decent and there are references to the village from the 12th century. Today it is a bustling centre accommodating tourists all year round. The weather was not fantastic for Ginger and Nutmeg’s visit so they did not put as many miles on the “boards” as they would usually but Nutmeg is pretty sure they tried about 30 lifts in their two days. 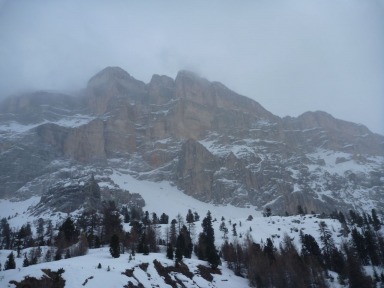 More photos can be found in Galleries: Mountain Views for those interested.