The Faces of Genoa Italy

The coastal city of Genoa (Genova in Italian) was Ginger and Nutmeg’s first overnight stop en-route to the Carnevale di Venezia and the Italian ski resorts.  It was a logical stop as it allowed for a just the right amount of time in the car (not too much, not too little). Genoa is the Ligurian port city where Columbus was born in 1451.  The current city and surrounding area encompasses a population of just over 1.4 million.  The historical city was listed on the UNESCO World Heritage List in 2006.  Genoa is home to the Bank of Saint George, one of the world’s oldest institutions, and it continues to hold a strong place in the Italian economy today. 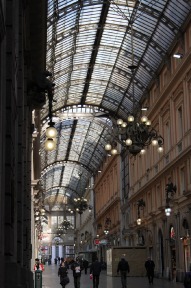 Ginger and Nutmeg stayed at the Bentley Hotel in Genoa.  This hotel is really beautifully appointed, however has little classic Italian, Mediterranean or European charm.  The hotel could be found in any major centre globally – it was lovely and the bathroom did NOT include the dreaded Euro shower.  Setting out on foot from the hotel to the historic district is an easy walk, although involves a long set of stairs as the hotel is located on an upper ridge of the city.

Genoa as a port city is well situated and organized for cruise ship traffic.  Many of the key attractions are found just along the waterfront including; the aquarium, the museum of the Antarctica, museum of science and technology for kids. The city tourist bureau has a large map (font and size) and an excellent web site available to visitors.  Nutmeg’s advice – get away from the very touristy port as one should not miss Genoa’s Via Garibaldi and the Palazzi dei Rolli.  These 16th and 17th century buildings were residences of the powerful families who were highly involved in the financial and sea based trade of the time.  For the most part these multistory palaces have been beautifully restored and are generally open to the public for viewing the open staircases, loggias and sculpted gardens.  Today these buildings are used for a combination of public (university, government offices, museums) and private uses. 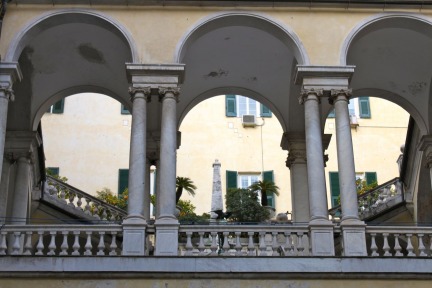 On the drive to Genoa Ginger and Nutmeg encountered a vento forte (strong wind) that had a definite cooling effect.  Walking through the narrow streets of the historic centre was much like pushing through a wind tunnel, Nutmeg had to buy a winter hat.  The city has some fabulous sites and beautifully preserved buildings.  However, this is a city where “tourist beware” is key.  Just off the Via Garibaldi and the Piazza de Ferrari one can easily stubble into the labyrinth of narrow, dark and uninviting alleyways.  Hold on to your wallet, purse and other valuables.  One of the local wondering police patrols warned Ginger that his camera might be safer hidden. Certainly, one short afternoon in Genoa is not enough to do the city justice.  Ginger and Nutmeg only had time to walk the historic streets and take some photos before heading back to the hotel for a cocktail. 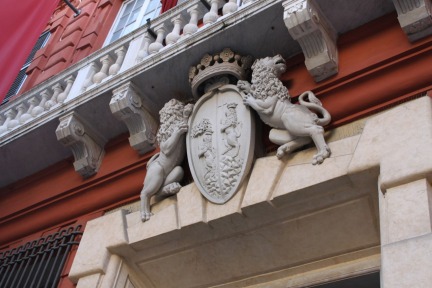 Genoa is one of many Italian cities where the cocktail (apero) is institutional. The hotel was a bit too quiet so Ginger and Nutmeg headed across the street to the very lively Mattoni Rossi (bar/restaurant).  The restaurant specialty is pizza, they were full so it was “suggested” that a drink in the bar might be a good idea (ever heard that line before?).  The narrow bar was worth the visit, on a Friday night, it is standing room only, there are lots of very salty bar snacks and the crowd is good fodder for people watching.  Typical Genoese bar snacks include pesto, focaccia and farrinata (chickpea flour and ricotta cheese). The bar scene was friendly and clearly a neighborhood haunt.

In the end Genoa has many faces: historical centre, tourist destination, port-based economy, rough edges and a warm heart.  There are more beautiful photos in Galleries if you are interested.