Are You Ready For The Bulls in Provence

Ginger LOVES the Calgary Stampede.  He is a faithful rodeo attendee and never misses a single chuckwagon race. Every year, Ginger dons his cowboy duds for the full 10 days of the Stampede, and a few more events on either end.  He is a dedicated volunteer, who donates his time selflessly every year.  OK, not exactly selflessly, there is an official access badge and lots of beer involved.  This year he will seriously miss his favourite event of the year.

The good news for Ginger, is there is no shortage of cowboy culture, horses and bulls in Provence. 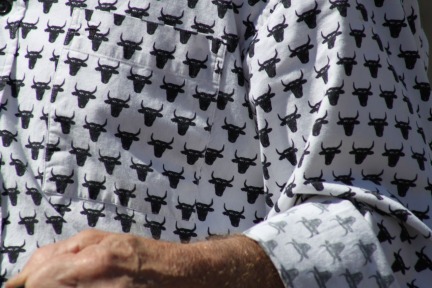 The Camargue, is located to the west of Marseille, south of Arles, divided by the Rhone river and bordered by the Mediterranean. This unique landscape is the marshy, wetland of the Rhone river delta. The Camargue is large, at 930 sq-km, at least one third of which is water in the form of lakes or canals. The wild and beautiful countryside has been protected in some fashion since 1927. In 2008, it was incorporated into the Parc naturel régional de Carmague, and it has been designated a UNESCO World Heritage Site.  It is certainly an area worth protecting. 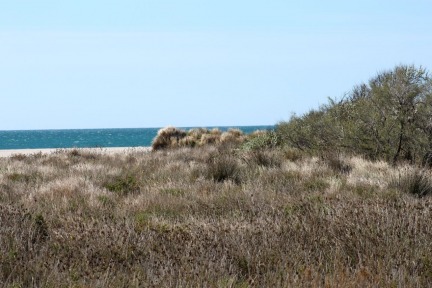 Aside from water, the Camargue is filled with fauna.  There are black bulls (taureau) bred for two purposes; fighting and their meat.  The landscape is home of a distinctive, powerful white horse. These steeds are a peculiar, small breed that have adapted to the harsh local conditions, over thousands of years.  Both the bulls and the horses, roam semi-feral around the ranches or manades. There are also lots of birds, thousands of them, including flocks of pink flamingos.

Like all areas of France, the Camargue can boast about a strong, local industry built around the cultivation and production of food.  There are rice paddies that stretch for kilometers, although production is now about one third of what it was in the 1970s.  Other planted grains included corn, wheat and canola.  On drier land, there are vineyards and fruit trees.  Local fishing and Fleur de Sel (specialty salt) production are also significant sources of employment in the region. 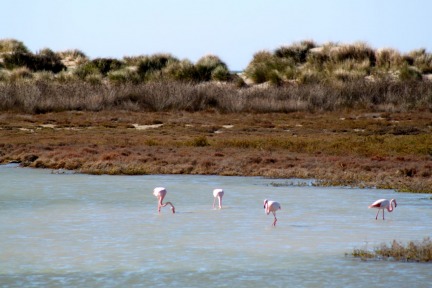 What does that have to do with the bulls?

Bulls have existed in this marshy area since Roman times.  Organized Spanish bullfighting (the corrida) first took place in the Arles arena in 1853, although events had been taking place for over 150 years before.  The ferias or fairs are enormous attractions in the region, the season runs from mid-March to mid-November, it is known as saison taurine.  The largest events can attract more than 500,000 spectators. Aside from the corrida there are a number of popular events including:

Surrounding all of this are parties, costumes, prizes and a whole lot of cowboy fun.  Ginger may miss the Calgary Stampede in 2011, but he will not miss the BULLS.

Saddle up all you Calgary Cowboys and everyone else, here is Ginger’s latest video the Course Camarguaise (click the link) in action.