It is impossible to do the history of Corsica justice in one short blog post.  The following is a brief summary and an opportunity to show off our photos.  For those history buffs out there, you can easily lose yourself for hours on the Wikipedia pages alone.

A history of strong, dominant forces formed the island of Corsica, throughout its’ entire history. The landmass of Corsica was created by intense, volcanic activity.  Among other names for this beautiful island, one is “a mountain in the sea”.  Corsica is the most mountainous island in the Mediterranean, with well over 100 peaks higher than the 2000-meter level. The dramatic peaks, lush valleys and 1000 kilometres of coastline, have all played heavily, in the civilization of the island, as it exists today.  The Moor’s head is dominant on the Corsican flag and visible throughout the island on 1000s of items from beer labels to beach towels.  The exact origins of the symbol remain debated; however, it is a powerful, iconic reminder of the island’s history.  It is a chronicle over millenniums of habitation, growth, conflict and struggle for survival. 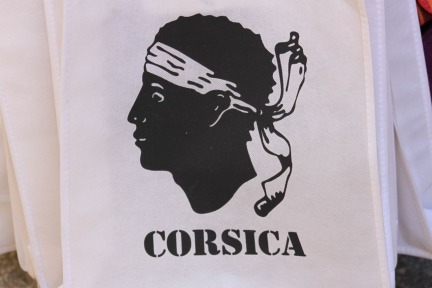 History experts believe, that Corsica was occupied as far back as the last ice age the Upper Paleolithic period (9000 BC).  Ginger and Nutmeg visited the more “modern” site outside Propriano, known as the Station Préhistorique de Filitosa. This prehistoric site was discovered in 1946 and is now accessible to the public for self-guided tours.

The site is thought to have been the home of Neolithic people, from 6000 BC, some 8000 years ago. This limited population lived in rock shelters and foraged for food in the fertile area.  During the archaeological digs fragments of pottery were uncovered, they can be viewed in the small museum.  During the Megalithic period 3000 – 1800 BC, a strong, seafaring, warrior population dominated the site. The signs of which, are evident in the menhirs that remain on the site.  The Torréen Culture then dominated the site, during the Bronze Age 1800 – 700 BC, destroying menhirs to use for construction materials for their “Torre” or towers.  The museum at Filitosa, is poorly lit, and the written material is limited, however, the rest of the site is worth the trip. 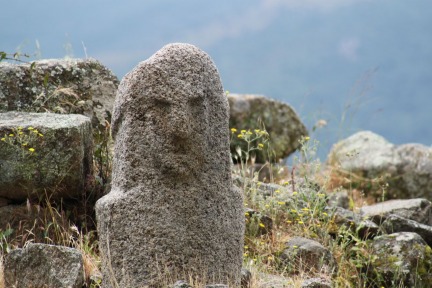 Jumping to more “recent” history. Ancient Greeks and Romans dominated the island for successive periods.  Strategically, Corsica was a significant location for raw materials and trade routes throughout the ages. Corsica’s geographic proximity to Sardinia and the Italian coastline featured tremendously in Corsican development. The history is long, and one fraught with continuous conflicts, followed by dominance, and then a new series of rulers.  Many towns such as Ajaccio, Bastia, Bonifacio, Porto Vecchio and Calvi, were built with walled citadels, for security purposes. The Pisan occupation was generally peaceful, allowing for some artistic development.  In Nutmeg’s view the Genoese period still remains one of the most prominent periods on the island.  The coastline is dotted with the remains of towers from the Genoese period.  The towers were built with the intent of protection against invading pirates.  In 1531, the Republic of Genoa determined 99 towers would be built (in the end 85 were constructed). Today, 67 towers remain in various conditions, from ruins to well preserved. 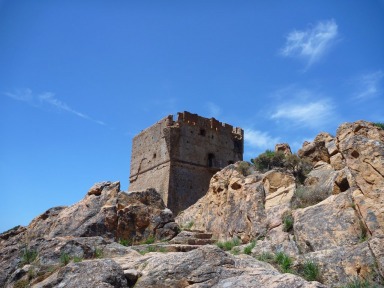 The French had long viewed Corsica as a strategic landmass, after a turbulent period Genoa ceded it to France on 15 May 1768.  A love-hate relationship has existed since that time, with France wanting control and the Corsican people struggling for independence.  The population of the island grew substantially in the 19th century, to some 340,000 people. However, the infrastructure and economic base did not exist to support that number of inhabitants.  The result was significant migration to France and other regions including Central America. The island of Corsica suffered in World War I, when some 12,000 died.  Economic uncertainty and politics around World War II, resulted in temporary Italian occupation, ending in liberation September, 1943 – when Corsica chose France.  Corsica continues to struggle today with maintaining heritage, culture and traditions.

Other fast facts on Corsican history:

Today, the island has a population of just over 300,000, it is unquestionably beautiful and remains conflicted.  The tourist trade is a crucial economic driver with over 2 million visitors a year.  The economic benefits are obvious, the impact on a highly patriotic, independent population will likely continue to be studied, for centuries to come.  Regardless the Greeks were right, they called Corsica or Kallisté, “the most beautiful”. 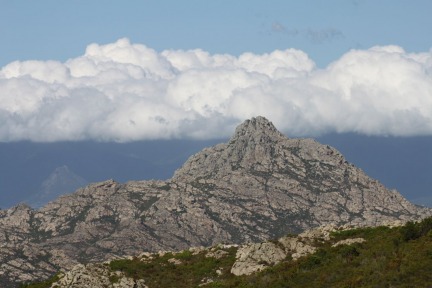 More photos in the galleries here.