Years ago, Nutmeg had a boss (a faithful blog reader) who suggested that it could be a career limiting move, to stay in Paris longer than the assignment required.  Nutmeg found this rather disappointing as she had a strong desire to explore Corsica, and felt that she deserved a holiday. The French, for good reason, call Corsica “l’Ile de Beauté” or Island of Beauty.  The island is stunning at every turn with sandy beaches, limestone cliffs, granite mountain peaks and lush agricultural areas.  Corsica offers something for every taste, from the “beach lizard” to the “adventure racer” and all the folks in between. Nutmeg would like to thank her former boss, if she had visited Corsica all those years ago two things probably would have happened: 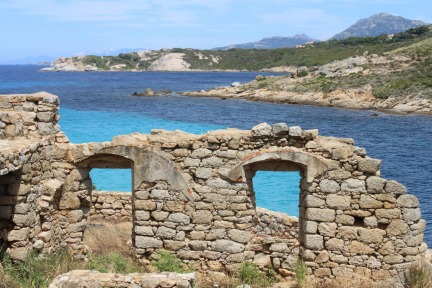 Ginger and Nutmeg booked their crossing on Corsica Ferries, from Nice to Bastia. The trip fell between two religious holidays, L’Assomption de Marie and Pentecôte, accommodation had to be booked in advance, dictating a clockwise circuit of the island.  Bastia is a port city, located at the northern end of the island. The historic old port, citadel and the current Place Saint Nicholas are all worth visiting. Bastia is a working town, which does not radiate natural or architectural beauty.  However, Bastia is the “gateway” city to Cap Corse, the wild and still relatively unpopulated area at the very tip of the island. There is one coastal road on Cap Corse, allowing the traveller to view most of the rugged coastline.  There are villages perched in the hills above the coastline, it is worth the drive to a few of these hamlets for some splendid views.  It took all day to drive 100km, in a place that combines the beauty of both Cape Breton (Nova Scotia) and Big Sur (California) on tiny roads with no shoulders and crazy drivers. 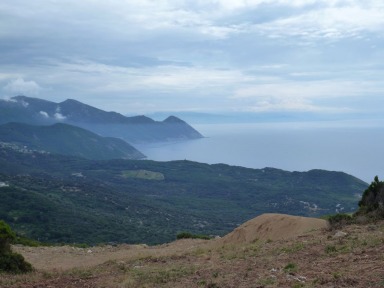 After two nights in Bastia, the next overnight stop was Corte, located in the mountains.  Corte’s permanent population is barely 7000, the numbers swell during tourist season, from April to November.  Corte was once the island capital for a short period from 1755-69. Unfortunately, it is not a remarkable beauty either, although it is worth walking up to the citadel and taking some photos from the viewing platform.  The allure is found outside Corte, in the hills and gorges surrounding the town. There are numerous hiking options from this point of departure.  Unfortunately, Ginger and Nutmeg encountered some inclement weather for their single-day visit, so hiking was out of the question. 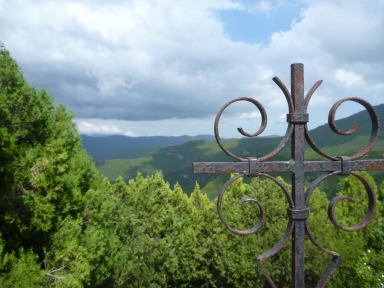 Down the coast from Corte is Porto Vecchio, famous for its’ marina and the beach areas close by.  Porto Vecchio was built on a hill above swampy marshes, a defensive tactic against pirates and malaria, which bred in the marshes.  The salt trade developed after the Second World War, finally turning the marshes into productive, economic use.  Today, Port Vecchio is actually two parts the old haute ville on the hill, and the modern port down below.  Nutmeg found the town and the setting to be a disappointment.  The old town is small and over-run with touristy restaurants and shops.  The port is unremarkable.

So where is the beauty?  Nutmeg was beginning to wonder!

Just south of Porto Vecchio it all starts to become clear.  There are small bays and natural harbors, the water is aqua colored and typically easily accessible by car or a short walk.  The town of Bonifaccio, located at the southern most tip of the island, is a real gem. The old town is built within fortification walls, high upon limestone cliffs of some 60 meters. The town setting, sheltered marina and stunning cliffs (les falaises) make Bonifaccio a real treat. 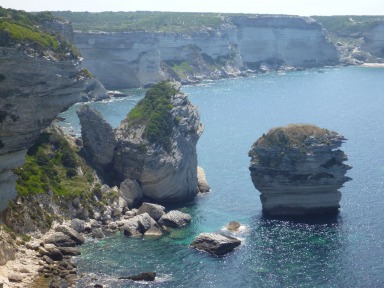 The coast from Bonifaccio to Ajaccio is beautiful, until you reach the capital city and its’ traffic.  At first glance, Ajaccio is not a beauty. The capital is large by the island’s standards with a population of just over 63,000. The city is poorly planned as the traffic is terribly congested. The real beauty in Ajaccio is found once you settle in to your hotel and go for a walk.  The waterfront is pretty with an attractive promenade area.  For Nutmeg, the real treasure is in the few well-preserved or renovated Genoese buildings found in the old section and the Quartier des Etrangers.

Nutmeg was convinced that they saved the best for last, and she was not disappointed.  The coastal drive from Ajaccio to Calvi is STUNNING.  However, be prepared for a long, slow drive as the road is small, full of turns and lots of photo opportunities. Not to be missed are the calanches (cliffs and rock formations) by Piana and the Golfe de Girolata. The last two nights were spent in the seaside town of Calvi.  This attractive town has embraced tourism but maintained its charm. The old town and citadel is located high on a cliff, overlooking the marina, surrounding the old and the new are small pedestrian streets filled with restaurants and shops.  Whether by careful planning, or simply luck the result is Calvi is an exceptionally pleasant place to spend a few days. 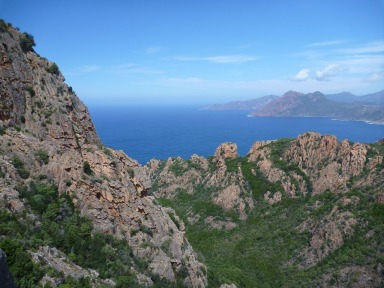 The twosome arrived back in Bastia for their ferry back to France, after ten days. They had entirely circled the island, putting over 1200km on their trusty ride. Nutmeg is already planning their return trip to “l’Ile de Beauté”!

Please look at the pictures in Corsica GALLERIES.