The island of Corsica is odd shaped, think of a bunch of grapes with the stem at the top and you will not be too far off.  The stem of the cluster forms the wild and stunning Cap Corse. The island’s terrain is enormously varied from mountain peaks (120 summits over 2000 meters) and river gorges to sandy beaches and lush plains.  This varied topography is reflective of the balance of the grapes in the bunch. Ginger and Nutmeg were told by friends that Corsica is like a mini-France. They were right, the island offers the traveller a rich and tasty experience within the 1000km coastline. The Corsican population is fiercely proud of their locally produced food and beverage products. Ginger and Nutmeg did their best to sample a wide variety of the available goods during their trip. Nutmeg had a bit of fun with this post and hopes you will too.

The following are the ABC’s of Corsican food for the hungry and parched traveller:

Domaine Arena – one of the top-rated wines on the island.  Ginger and Nutmeg have tried the red and white varieties – both are excellent. This winemaker is located in the Patrimonio region.  They were one of the first vineyards to begin the process of replanting classic Corsican grapes such as Biancu Gentile.  The wine is made in an organic style, and it is delicious. 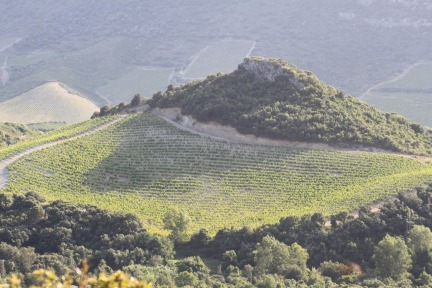 Brocciu – cheese is made from the whey of sheep (brebis) or goat milk.  It is similar in texture to ricotta but suitable for lactose-free diets.  Brocciu is considered one of the national foods of Corsica.  The cheese is remarkably versatile; it is used in everything from beignets (donuts) to omelettes and pastas.

Châtaignes (chestnuts) – considered the “tree of life” in Corsica.  The tree is mentioned as early as the XIIIth century in Corsican records.  However, studies have indicated that the tree was present in the Neolithic times.  The tree flowers in May and June and the chestnuts are harvested in the fall (October and November).  The fruit is dried, shelled, sorted, heated and finally ground into flour.  The flour is sold everywhere and used in a wide variety of cookies, cakes, breads and even a porridge called pulenda.

Bread of the Dead “Pain des Morts” – this sweet bread is a specialty of Bonifacio and the surrounding area.  It is made with raisins and walnuts.  The bread can be found in all the local bakeries and the Tuesday morning market.  Traditionally, it was served on All Saints Eve (Halloween), now it can be found all year around.

Eggplant (aubergine) – obviously this is not native to Corsica, but a traveller would find it hard to miss the signs for Aubergines farcies à la Bonifacienne. A delicious vegetarian dish of eggplant, bread, milk, cheese and eggs. 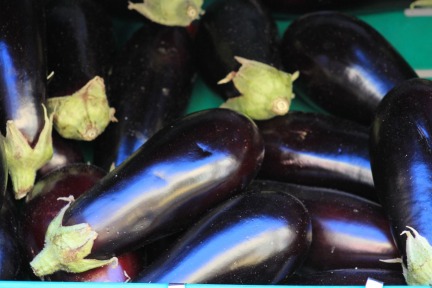 Le Fiadone – this is a Corsican cheesecake made with brocciu cheese as the base.  It is essentially a cheese flan, suitable for gluten-free and dairy free diets as it is made without flour.

Grapes – have existed in Corsica since the Phoceans in 570 BC.  Starting, in 1960, until the middle of the 1970s the areas with planted vines expanded to four times the previous coverage.  Today there are nine Appellation d’origine contrôlée (AOC) regions on the island with a total production of 13 million bottles.  Production is usually in micro-parcels. Many of the regions have marked “routes des vins” for thirsty, curious visitors.

Honey (miel) – it would be difficult to say this is a product with exclusively Corsican roots.  Honey can be found in many regions around the world. What is unique is some of the flavors such as chestnut and maquis.

Jam (confiture) – one would be hard pressed to say that jam was invented in Corsica.  However, there is a sizeable industry surrounding the growing of fruit and production of jams. Some unique flavors include fig and nut, clementine, and sweet chestnut.

Key Ingredients – the typical Corsican plants, herbs and flowers grow wild in the maquis or wild scrub.  These ingredients heavily influence the flavoring of meats, cheeses, honeys and local dishes.  Some of the typical plants found in the maquis are rosemary, laurel, juniper, sage, thyme, mint, lavender, myrtle and many others.  The heavily aromatic scent of the maquis is a key ingredient in the island gastronomy. 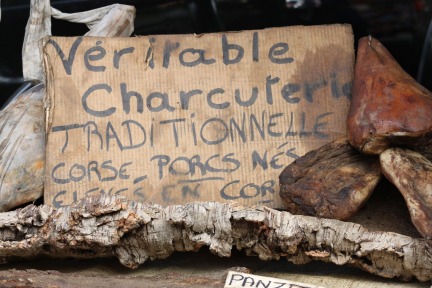 Muscat – a hugely popular grape variety in Corsica.  The wine can be sweet or quite dry.  There is even a sparkling variety. It is typically served as an aperitif.

Noisette (hazelnuts) – although not as prominent as the chestnut, the hazelnut is a re-established crop.  The nuts are used in honeys, oils, flour and candies.

Olives – grow abundantly as is common in Mediterranean climates, in Corsica the fruit is allowed to ripen on the tree.  The ripe olives are collected by hand in November through January or in nets February to May. The olives are made into oil, soaps and other products.

Pompelo and Clementine – citrus production in Corsica is generally located at the northern end of the island. The citrus is either consumed on the island or exported exclusively to France.  Ginger and Nutmeg sampled the tasty clementines at Christmas time. 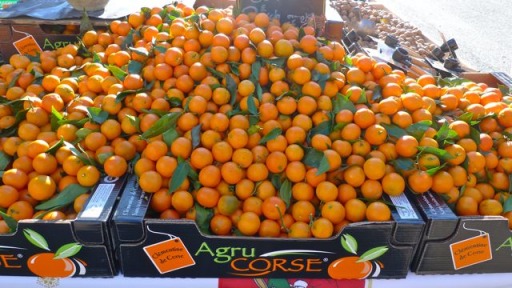 Quintessential – in the Mediterranean region, it would be difficult to state that one food or product is unique to an area. Centuries of maritime trade in Corsica influenced the development of products and industries.  What is unique about Corsica is that the island offers such a vast range of products due to the diversity of terrain, altitudes and long a coastline.

Rosé – Nutmeg is not an enormous fan of rosé wines, although will acknowledge the longer she lives in France, her palate is changing. It could be the favorable climate. Nielluccio is the grape common in rosé wine and is one of the indigenous varieties in Corsica.

Sciacarello – a red-wine grape mainly from the Ajaccio region.

U Corsu – the traditional language of Corsica which sounds a bit like Italian.

X-Extra Special – food in Corsica is similar to that of many countries around the Mediterranean.  It is influenced by the climate, the sea and to a large degree history.  What Nutmeg found remarkable in Corsica is the strong pride in the production of goods that are “100% Corsican” (although buyer beware make sure to read the labels).

Y-Last Names – the traditional spelling of last names in Corsica is the letter “i”.  However, when the Corsicans arrived in Puerto Rico (starting in 1830) the Spaniards would write the names with the letter “y”.

Zilia – a sparkling water, other popular brands are St Georges and Orezza 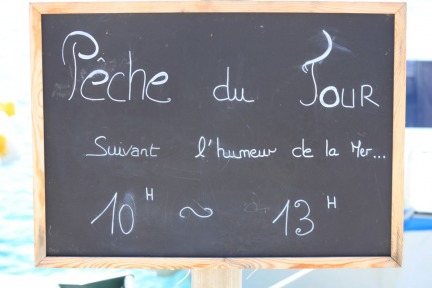