Does the colour ORANGE cause you think of your crazy Dutch friends, celebrating Koninginnedag (“Queen’s Day”) on April 30th?

Does the colour ORANGE make you cringe due to the gyrations in your trading account at ING Direct?

Does the colour ORANGE make you think of the massive mobile phone network operated by France Telecom?

Does the colour ORANGE evoke memories of the political protests in the Ukraine in November 2004 – January 2005 (the Orange Revolution)? 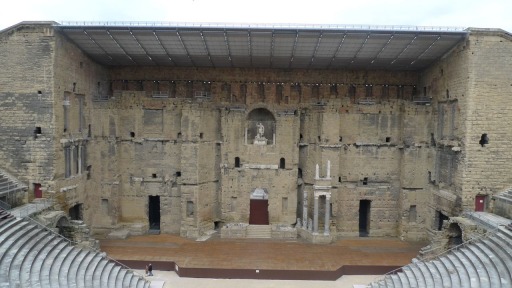 The town of Orange is 21km from Avignon, although holds much less appeal than its’ larger neighbour. In 105 B.C., a Celtic settlement named Arausio (after the Celtic water god) existed in the same location. The Romans founded Arausio in 35 B.C.. Looking at the city today, it is difficult to imagine the prominence it once held in Roman times. Orange has been described as “miniature Rome”, 2000 years ago it was the capital of Northern Provence. Key decision makers and military figures were represented in the population. The building structures constructed in a manner reminiscent of Rome.  Today, little remains of the former glory. In reality, Orange would not even deserve a stop on a visitors’ schedule, were it not, for the remains of two significant Roman buildings. The two structures are the Arc de triomphe d’Orange and the Théâtre Antique d’Orange. Exact timing of the construction of the arc is unclear. However, it did form part of the fortified walls of the town during the middle ages. Today, the Arc de triomphe d’Orange, stands alone on the busy N7 traffic corridor.

The Théâtre Antique d’Orange was built during the 1st Century A.D. under Roman direction. This ancient theatre, was declared a UNESCO World Heritage Site in 1981, with good reason, it is outstanding. The theatre is extremely well preserved; experts argue that it is the best remaining example from that era. The stage wall is one of features that make this site unique. This massive wall, which served an acoustical purpose is almost entirely intact. The Ancient Theatre of Orange had the capacity to hold 9,000 spectators.  In Roman times, theatres were built for entertainment purposes, serving as venues for comedies, tragedies, pantomimes and choral works. The design of Roman theatres was a semi-circle layout, with tiered seating, an orchestra stage and a stage wall.  The combination of these elements created excellent acoustics.  The tiered seating was specific to provide better visibility for those located further from the stage.  However, the seating also served the purpose of distributing viewers according to their societal ranking, where the powerful military and political figures occupied choice locations at the front of the theatre.  The popularity of dramatic productions enjoyed during Roman times declined as Christianity rose in significance. The acceptability of such leisure pursuits was deemed inappropriate. In 391 A.D. under edit from the Church, the Orange theatre was closed to these uncivilized events. 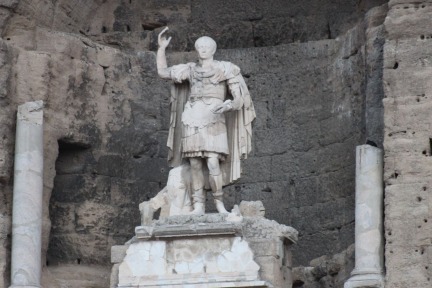 With such a tumultuous past, it is remarkable that the theatre is as well preserved as it is today. After the 4th century, it was pillaged by barbarians and later served as a military outpost. During the middle ages, the theatre offered shelter for townsfolk, who built living quarters within the external walls.  Before any restoration projects could begin, property owners had to be bought out. Restoration work started on the theatre in earnest in 1825.  Since 1869, the Théâtre Antique d’Orange has existed as a venue for performances. Originally named the “Roman Festival” the productions are now known as Les Chorégies d’Orange, the meaning of which originates from a fee that wealthy Romans paid for productions.

Today, the theatre in Orange must compete against the other regional centres (Avignon, Marseille, Aix en Provence) to attract spectators.  Every summer Les Chorégies d’Orange hosts a short program of opera and classical music. Nutmeg could not resist the thought of attending an opera in a 2000-year-old structure.  On a beautiful July evening, Nutmeg and her three dates headed to Orange to watch the performance of Aida, with 8000 other spectators.  Dinner first, at a restaurant appropriately named la Grotte d’Auguste.  Followed by a real spectacle in Orange.  It was fabulous!! 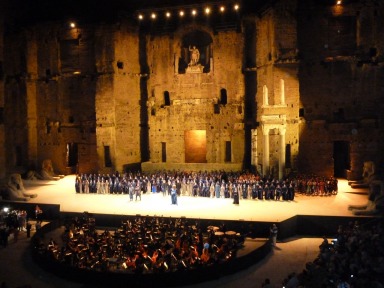