The bi-annual movement of livestock between valleys and higher alpine pastures is a definitive marker of the changing seasons.  Transhumance comes from Latin roots, trans ‘across‘ and humus ‘ground‘.  There are forms of transhumance on almost every continent, which vary in timing, cultural influences and distances travelled.  The practice of flock herding and nomadic migration has occurred naturally for centuries as a way to transfer livestock from one grazing ground to another. In order to escape, from heat (summer) or cold (winter) depending on the direction of the movement. 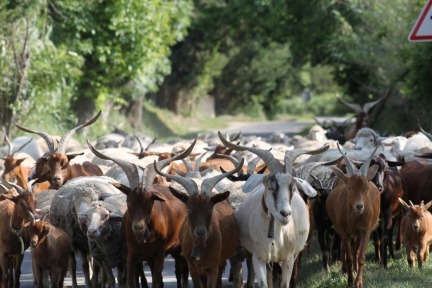 The practice of  seasonal movement of animal flocks exists from Neolithic times. As the weather began to get warmer some 4000 years ago, it became necessary to move grazing herds to higher ground to find food. The animals would feed in the garrigues, or scrub-lands of the Crau and Camargue, in the fall and winter.  After the spring rains, the flocks would then be guided northward to the Alps and the Jura for the summer months.

Originally, grazing land was available, and the flock movements were relatively unrestricted. The Cistercian religious order, took a particular interest in acquiring pastureland rights, to feed their flocks.  This land acquisition is believed to have increased power and the wealth of the order.  It reduced their dependence on cereal crops, which were labour intensive and had suffered numerous challenges of weather and pestilence. There are recorded conflicts over grazing rights and the affects of the Cistercian transhumance, these disputes were settled by agreements called convenientiae which documented the restrictions on the land and the timing of the flock movement.

Sheep herds were quite large into the middle of the 19th century, at between 2000-10,000 animals.  The sheep were raised primarily for their wool, milk and meat were secondary.  In 1860, France signed an agreement with the United Kingdom allowing for the import of wool from the British Empire.

Even Nutmeg’s rusty Economics background, could tell you that change caused a rapid decline in the price of wool, and the perceived value of the herds. The focus for large commercial farmers changed to sheep for protein sources.  The wool sheep herds were sold off at low prices.  Their shepherds/owners are called herbassiers, these are normally sheep breeders without land of their own.  They typically lease land for seasonal grazing. 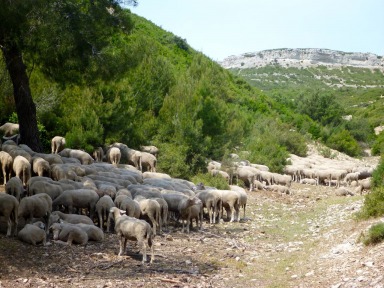 Overtime the practice has become restricted by private land ownership, the development of urban areas and the expansion of transportation corridors (roads and rail).  Evidence of the traditional life and migration routes can still be seen in fields around Provence.

In Provence, today the transhumance of sheep and goats involves transport trucks. Gone are the many weeks of walking northward along the walled sheep roads called drailles. Today, there are festive events in villages; parades of old farming equipment, traditional costumes, marching band and lots of animals. 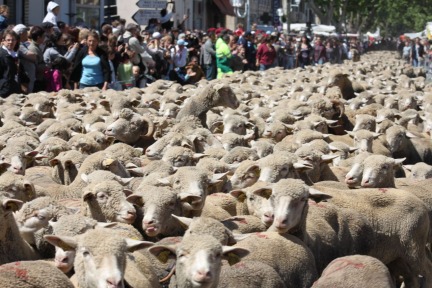 In May, there will be a huge transhumance to celebrate Marseille-Provence 2013 checkout this cool video here.

Do you know how many animals will be involved?