In a country such as France with a rich, complex history and endless stunning vistas, one is hard pressed to pick a favourite place. A friend suggested to Ginger and Nutmeg that a drive through the Haute Provence Vallée du Jabron, is well worth the effort.  Nutmeg would like to thank their friend for the suggestion, as the valley is remarkable.  The route starts just outside Sisteron (see photo below) and heads westward along the D946 through tiny hamlets.  The following description, translated from the official website, is a beautiful portrayal of the valley:

From the Durance to the Luberon, from Mont Ventoux to Sisteron lives between the moon and the stars the Jabron Valley.

Giono is the mountain, the land of shepherds, lavender, olive trees …

A Kingdom of silence, a land of lights, of stars …

A valley where one finds the will to live. 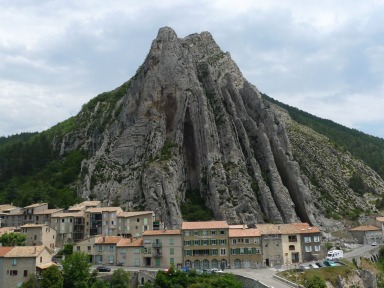 Ginger is a terrific sport and willing companion.  Nutmeg thought they should visit La Vallée du Jabron, despite the fact that the drive would be five (5) hours longer, than the direct route home.  With their cameras close at hand, take-out lunch from a boulangerie in Sisteron, and extra water for Jade, the three-some headed west.  The villages along the way are: Bevons, Valbelle, Noyers sur Jabron, St Vincent sur Jabron, Chateauneuf Miravail, Lange, Curel, Montfroc and Les Omergues. To describe these hamlets as small is an exaggeration. These are tiny outposts nestled in the valley along the flow of the Jabron river, surrounded by the peaks of Montagne de Lure and Mount Ventoux in the distance. 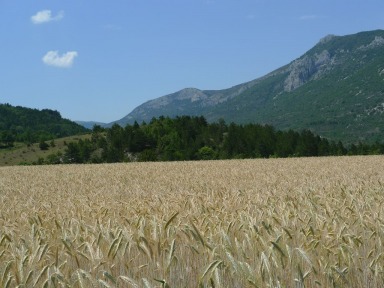 This is an agricultural valley where you can find almonds, truffles, sheep, wheat, goat cheese and honey.  Like the rest of France, there are also ancient churches, chapels and châteaux. The uncrowded hiking and biking trails reward sporty types. 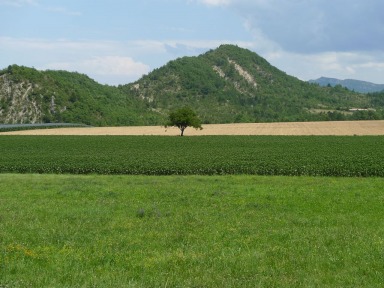 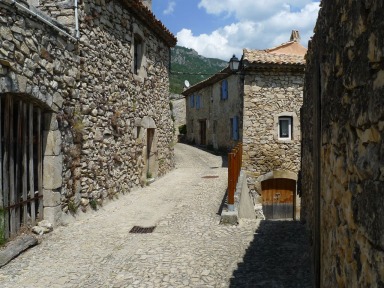 An afternoon spent in the area gives one the feeling (or is it reality?) that time has stopped. This is a relaxing afternoon drive; do not miss La Vallée du Jabron.