Provence the Land of Lavender

Nutmeg has been fortunate enough to visit France several times. One year Ginger and Nutmeg joined some friends on a cycling trip through Provence.  That was the beginning of their “love-affair” with the region. However, on all the previous trips the fields of lavender had already been harvested, it was too late in the season. This time Nutmeg was determined to see the flowering fields.

The lavender plant is actually part of the mint family, and there are some 39 varieties.  The plants love the dry, sandy, rocky soil that is typical of the Vaucluse region of Provence.  Lavender flowers come in many colours, they can be blue (almost indigo), purple, violet, even pink or white varieties exist. It is a relatively easy plant to grow, as it requires minimal care. 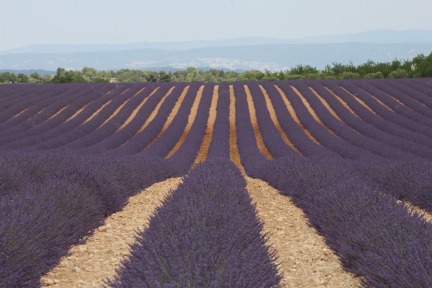 Like most plants lavender has a long history, mentioned in the bible as nard.  The Romans used the expensive flowers to scent bath water; they also gave it a more pleasant name from the Latin verb lavare (to wash). Over the centuries, lavender has been used for medicinal, culinary and even protective purposes. Whether you like the fragrance or not, it would be difficult to escape Provence without seeing and smelling lavender in some manner. Ginger has even tried lavender flavoured gelato, once was enough!

Nutmeg convinced Ginger that a couple lengthy drives to see the fields of the Vaucluse in flower would be worth the effort.  The fields are beautiful everywhere, however, it is the sheer abundance that is striking, in the area around Sault and on the Plateau de Valensole. 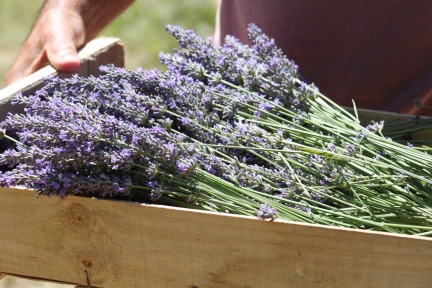 Lavender is a substantial business in France, with over 50% of the worldwide production. There are over 16,000 hectares cultivated, employing thousands of people directly and indirectly. Ginger was eager to take some photos of the fields but he was far more interested in the large farm equipment. Lavender is rarely harvested by hand now, unless it is for personal use. Specific tractor attachments are used to push the lavender together, bundle, tie and cut.  The bundles are then left to dry in the sun for 2-3 days.  After which they are gathered into giant bundles similar to large hay bales. The bales are dropped into enormous cauldrons with water, where the steam passes over the flowers, to create the essential oil and lavender water. 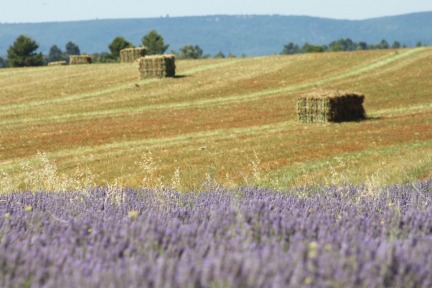 The use of lavender in Provence borders on extreme from soaps to honey, from essential oil to ice cream. However, one cannot argue that it is a stunning beauty at the peak of the season – Provence the land of lavender. If you have not had enough yet – click here for the Lavender Photo Gallery.