Literally as old as the hills, the fruit of the apricot tree are confirmed to have been domesticated since the Bronze Age. Although, the exact origin of the tree is debated; 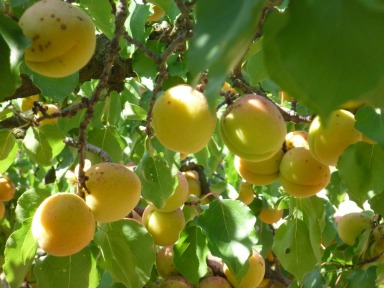 Apricots prefer warm climates and will tolerate some temperate regions, such as southern France, as long as there is a slight risk of frost. The trees are small, and the fruit is produced reasonably early in the growing season.  During Ginger and Nutmeg’s French holiday, the apricots started to appear in the markets shortly after the cherries. The apricot is a stone fruit, from the same family as the plum and the peach. These little beauties pack a surprisingly strong nutritional “punch”. They are high in fiber, low-calorie, contain vitamins A and C and have offer elevated levels of carotenoids (prevention against heart disease and reduction of cholesterol).

With such a long history of human consumption, there have been (possibly still are) many beliefs surround the benefits of the apricot including its possible aphrodisiac effects.  Total world production of apricots, in 2008, was 2.7 million tons of which France made up 6%. France’s production may be relatively small globally, but the country is quite involved in scientific research around improved apricot varietals.

The apricot is only available for a short period and the fruit spoils quite easily – indulge while they are  fresh. 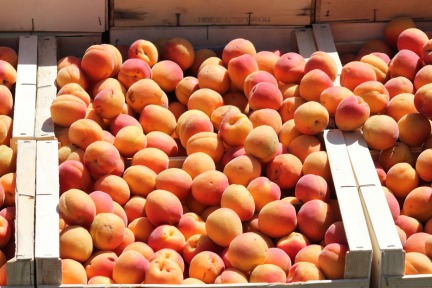 The following recipe is not French. Nutmeg’s friend Sassafras is both a fantastic hostess and guest. In a single week, this lady suffered through two long transatlantic flights and somehow she still found the time to whip up some Apricot Chews. The group tried this delightful snack during a ski weekend in Chamonix.  Whether you like apricots in their natural, fresh state or as dried fruit or not at all, you will enjoy this recipe.

Print
Apricot Chews
Prep time:  10 mins
Cook time:  30 mins
Total time:  40 mins
Serves: 20-30 squares
These squares are easy to make and very yummy. We tried them after a long ski day and practically devoured the whole package. Store in a sealed and locked container if you want to make sure to keep them around for a while.
Ingredients
Instructions
3.2.2499
Nutmeg and Ginger did end up with some homemade apricot jam; made by an expert. So they have been celebrating the healthy ancient apricot with their coffee and toast in the mornings.
Share the love.