You have watched “The Way” the 2011 movie staring Martin Sheen, written and directed by his son Emilio Estevez.

You have a friend who has walked the Camino and now you are thinking of walking to Santiago de Compenstela.

Where to start? What to carry? What footwear? Which route? It is confusing.

The following is not a checklist but rather a few things every potential pilgrim should know about the long route to the renowned cathedral. Given the nature of this trek there are a few extra letters (C,P and S) in this ABC list. 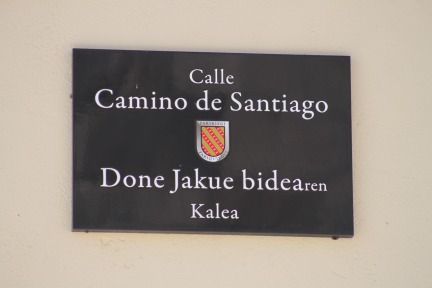 Albergue refers to a shelter, refuge or hostel for weary pilgrims.

Buen Camino the salutation given to fellow travellers along the route.

Compostela – Santiago de Compostela is the capital of Galicia and the location of the famous cathedral.

Camino Francés is the French route; it runs from St Jean Pied de Port on the French-Spanish border where the trail crosses the Pyrenees. This is a popular route as many of the European trails intersect the Camino in St Jean. The majority of walkers are Spanish and French; however, you are sure to hear many other languages along your way.

Distance is as long or as short as you decide. The Camino route from St Jean to Santiago is 780km.

Donejakue Bidea is the Basque name for the Camino. The route passes through some of the Basque region of Spain. The food offered in the bars reflects their love of Piquillo red peppers and ham. Old separatist passions have died down, but regional pride is still strong where signage is typically in found, in both Spanish and Basque.

Finisterre translates into the “end of the earth” or “edge of the earth”, a rocky peninsula on the coast. Some pilgrims who cannot get enough, continue on another 90km to reach this austere outcrop. It is often a dumping ground for well-used hiking boots.

Galicia is one of 17 autonomous communities in Spain where regional governments are responsible for education, health and other social services. Galicia is “home” to both Santiago de Compenstela and Finisterre. This region shares a border with Portugal and has a long, rough coastline on the Atlantic Ocean and the Bay of Biscay.

Helados is Spanish for ice cream, a welcome treat along your walk or at the end of a long day.

Inuksuks by the hundreds have been formed along the paths by discarded rocks and pebbles marking the route at irregular distances. Many of these cairns are purely decorative, some are more functional, in particular those that indicate the direction over the Pyrenees from St Jean, a section where people often get lost. 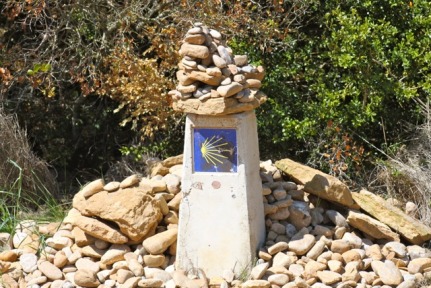 Jamón is the Spanish word for ham. Similar to Italian prosciutto it is dry-cured. There are two main varieties Ibérico and Serrano.

King Charlemagne’s chess set is located in Roncesvalles possibly the most famous chess set in the world. However, historical consensus is that the King did not play the game. Date testing on the pieces that are on display in Paris have revealed that the pieces may have been created around 1100 well after his death.

Monument to all the pilgrims past, present and future is located at the Alto del Perdón outside Pamplona. 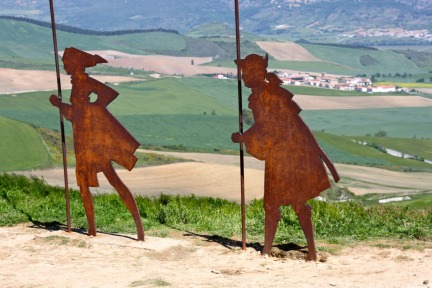 Navarra was once the Kingdom of Navarra. This region covered territory on either side of the Pyrenees and as far as the Bay of Biscay. Occupied by pre-Roman settlers, this area experienced many battles for control as it formed a key component of trade routes. Navarra was at its largest geographical expanse under the reign of Sancho III Garcés or Sancho the Great from 1000–1035.

Olives, the slopes of the Pyrenees and beach forests give way to olive groves and vineyards.

Penance was the historical reason why religious pilgrims followed this route. From The Catholic Encyclopedia:

“In the registers of the Inquisition at Carcassone… we find the four following places noted as being the centres of the greater pilgrimages to be imposed as penances for the graver crimes, the tomb of the Apostles at Rome, the shrine of St. James at Compostella [sic], St. Thomas’s body at Canterbury, and the relics of the Three Kings at Cologne.”

Passport carried by most walkers, this little booklet is the place for the ink stamps of bars, restaurants and places you have rested along your way. It is more than just a nice souvenir, as you need to demonstrate that you have completed 100km on foot or 200km by bike, before reaching Santiago, to have officially done the Camino and receive your certificate. 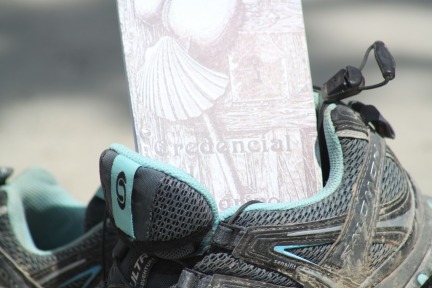 Queso is cheese in Spanish.

Rioja terrific wine is found in this region, where grapes have been growing since the time of the Phoenicians.

Saint James the apostle whose remains are supposed to be buried on the site of the cathedral in Santiago de Compostela. Legend or fact, we will never know the truth, but the attraction of the journey to the shrine still continues after over 1000 years.

Scallop shells mark the passage, hang on backpacks and create a strong connection with the Camino. The shells were once found in abundance on the shores of Galicia. Today, it is mainly decorative, but at one time, it served a more practical purpose, a drinking vessel for thirsty walkers. 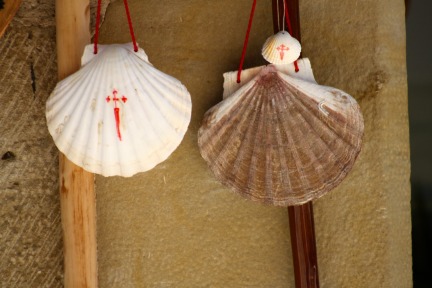 Tapas, Pintxos, or Pinchos are all roughly the same thing, small snacks eaten at a bar or restaurant with a drink. Pintxos is the Basque word for pinchos, which are often skewered into a piece of bread. 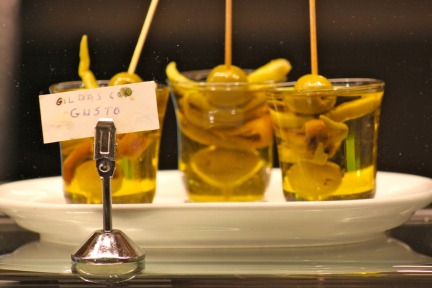 University of Navarra a private university founded in 1952, one of the four Spanish campuses is located in Pamplona. As pilgrims leave Pamplona, they will see the beautiful grounds of this prestigious school.

Vino Tinto/Blanco likely does not need translation a glass of either is quite welcome at the end of a day.

Wine Fountain or “fuente del vino” located just out side Estella at the Irache vineyard where pilgrims can help themselves to a taste of wine from the spout. You can watch pilgrims on CCTV here.

X marks the route you should NOT take. The trail is often marked with painted flashes. An X usually indicates do not go this way!

Yellow arrows and yellow painted flashes mark the trail along with scallop shells and cairns.

Zapatos or shoes the choice of footwear is probably the most consequential decision a pilgrim needs to make before starting their journey.

We hope you enjoyed Nutmeg’s Camino ABCs. Let her know if she has missed anything.