Letters from the Fete de Village

Cowboy culture runs deep in parts of Provence and throughout the Camargue. Although, the customs have Spanish roots, the Provençal character is what thrives today.  White horses, black bulls, traditional costumes, processions and convivial atmosphere all surround several days (and long nights) of events. The program is built around a celebration of the patron saint of the village church. However, most of the activities have nothing to do with religious orientation. 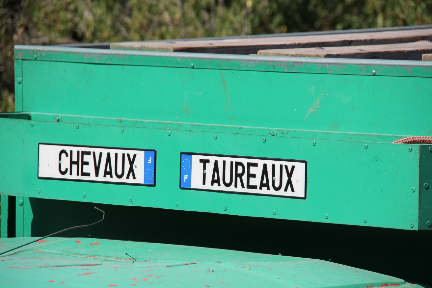 Every Provençal village hosts a variation of these festivities. Consistent elements of which, are captured in the ABC list below. If, you missed Nutmeg’s 2012 post you can see it here.

Abrivado is a Provençal term that translates into “hurry forward.” The horses and their riders enclose a small herd of bulls and move them towards the arena for the games. The name is associated with the arrival of the bulls. 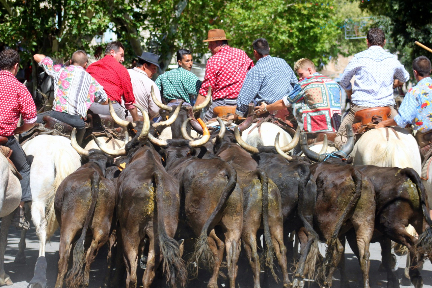 Bandido is the opposite it is the return of the bulls to pasture (pâturage). The hurried rush through village lanes to the open fields.

Chevaux in Provence are a grey-white breed. These small, sturdy horses have inhabited the region for hundred of years

Draft beer is sold by the hundreds of litres.

Entertainment alternatives exist day and night. As much as the fête is based around equine and bovine traditions, there is an equal emphasis on opportunities for socializing over a meal or enjoying the music of live bands.

Ferrade is an event surrounding the branding of the young bulls with the mark of the ranch. Horse mounted riders corral the bulls towards the spectators.  Those who are young, agile and stupid enough, attempt to catch the young bulls and wrestle them to the ground. Once settled, the calf receives the mark au fer rouge (red hot iron).

Gardian is the Provençal term for a cowboy or cowgirl. 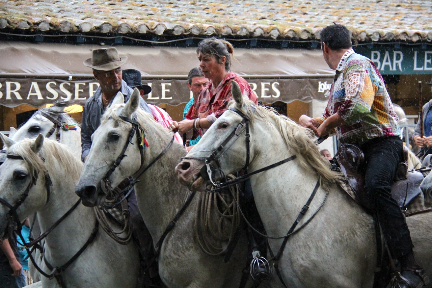 History – The abrivado, bandido and the rest of the traditions surrounding the horses and bulls are from a time well before transport trucks. The enactments in modern times are clearly for the benefit of spectators and for those village youths wanting to demonstrate their bravado.

Ibiza a small Spanish island near Valencia, with an enormous reputation for its party scene. The bars in the village during the fête are evocative of Ibiza’s nightlife.

Jeux or games called Course Camarguaise or Olympiads are a demonstration of skill and daring. Not much has changed since Roman times. These games still involve men and animals testing their limits before spectators in arenas.

Karts and other kiddie games are part of the backdrop during the fête de village.

L’Eglise Saint-Laurent is the name of the church in Eygalières and the name of the town’s patron saint. The remains of the original 12th century church are found at the top of the hill in the old village. Today the place of worship is located between the old and new sections of the town.

Manade is a Provençal word that dates from 1867. It refers to raising horses and cattle (black bulls) in a semi-feral fashion, allowing the animals to roam freely.

Not Haute Culture. Clearly, the fête is not where one should expect to find Paris runway models. 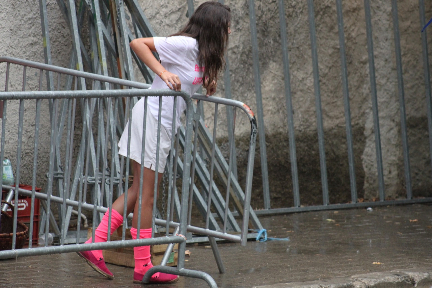 Onion Soup – Although it may seem a bit out of place on a hot August evening this meal is regularly featured on the menu for the large village open-air diners.  Another traditional meal is Aioli, which is the combination of steamed vegetables, salted cod and sea snails (bulots) all accompanied with garlic mayonnaise (aioli). 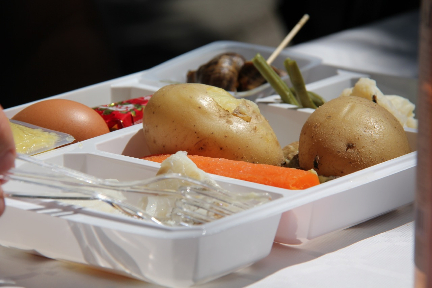 Pastis is a popular alcoholic beverage, flavoured with anise (black liquorice) and sugar. Pastis is a clear liqueur in the bottle. It is usually served with water and ice, which causes the liquid to become a cloudy yellow colour. Pastis has been fabricated commercially since 1932.

Quiet hours – There are few quiet moments during the days and nights of the fête usually found only after 2:00am.

Rosé like Pastis is a common, refreshing beverage during the festivities. Provence wine growers benefit from the natural gifts of high-quality soil, brilliant sunny days and ready access to water sources. Provençal Rosé has a world-recognized reputation for a light, dry wine. Rosé should be served chilled with ice cubes.

Sardinade or grilled sardines are prevalent in areas near the Mediterranean. The fresh fish are usually grilled whole, brushed with olive oil and sprinkled with herbs de Provence. This meal is undeniably an acquired taste.

Taureaux or black horned bulls are iconic in the region. The Provençal name is Raço di bioù. The bulls are usually reared semi-feral, allowed to roam the marshy surfaces of the Camargue.

Votive – Fête Votive. The word is thought to come from the Old Provençal word Vot meaning a promise made in heaven. The term Fête Votive became official in 1876 for a festival or feast dedicated to the patron saint of the local church.

Young Cowboys and Girls – The equine culture is deeply entrenched in the region and within extended families. The kids are encouraged to participate in all of the activities and prime their skills at an early age. 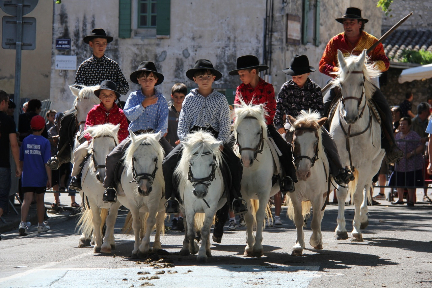 Nutmeg could not think of anything for U and X. It could be that she consumed too many rosés and ate too much aioli, all on far too little sleep.

Can you help her out with those missing letters?