The stonemasons never showed up.

Who could blame them? 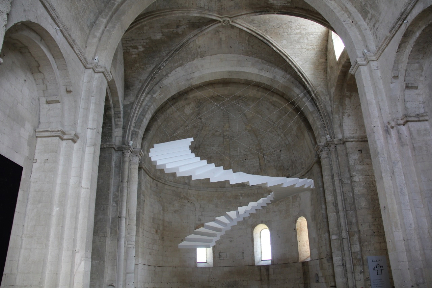 Nutmeg decided to pay a visit to the Abbey of Montmajour a place where the original labours would have had NO choice, but to show up for work. This reconstructed abbey located just outside of Arles was included on the list of France’s historical monuments in 1840.

There are unproven legends related to the initial history of this location, the one that seems to hold the most credence is that it was an ancient burial ground. The experts believe this plausible as, at one time, it was the only solid ground rising above marshy waters, known as St Peter’s island. 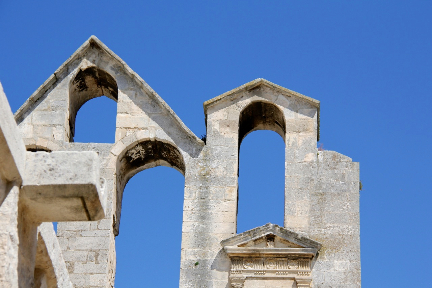 Benedictine monks began construction of a modest chapel on the hillside in the tenth century after a noblewoman, Teucinde from Arles, had willed them the land in 943. The spot was ideal as it held a commanding view of Arles, yet allowed hermitic monks the peace and quiet necessary for their faith. The building is situated on a rocky limestone outcrop of 43 metres in height.

Over the next few centuries, the Benedictine monks became very influential in the area, due in a large part to the agricultural riches readily available from their land. The area was suitable for animal grazing, fishing and for the cultivation of almonds, olives, corn and grapes.

A substantial Romanesque church soon overshadowed the initial modest chapel that had been carved into stone ledges. This church is both architecturally interesting and imposing. Built on two levels, the crypt on the lower level serves in large part as the foundation for the church. The southern edge of the crypt is dug into the rocky slope, and the north face provides reinforcement for the weight of the church with the use of double arches, a technique borrowed from the Romans. 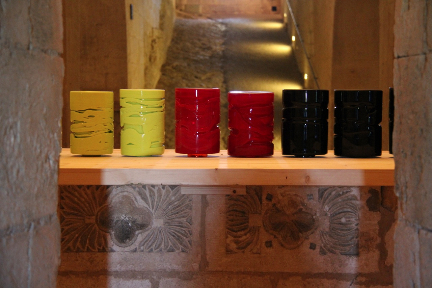 The church itself is laid out in a simple Latin cross format, with natural light streaming in from windows above the choir. The architectural elements although simplistic in appearance have conquered the harsh extremes of Provence; the rocky uneven slope, the fierce north Mistral wind and the intense summer heat. The building is of significant size, yet it is worth noting that five bays were originally planned, and only two were ever constructed, due to economic realities of the late 12th century.

A restored 12th century cloister was at one time covered. The galleries of the cloister were used for tombs as evidenced by wall chambers and paving stones. 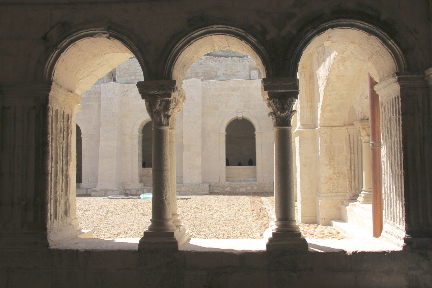 The Saint Maur Monastery built in the early 1700s was ravaged during the French revolution, in a two-year period, when stone and roof timbers were removed. The building would have been impressive at its prime covering 8,000 square metres on five levels. It was the largest Maurist monastery in southeastern France. 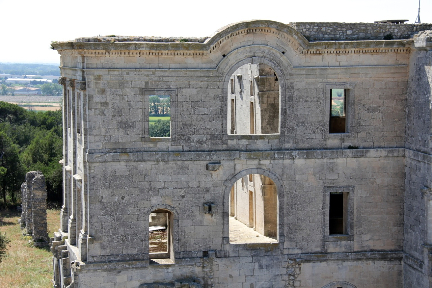 It is hard to imagine the time when peaceful monastic days were brought to an end by rampaging forces. Arles was first attacked in 1357, followed by twelve years of hostility that ravished the countryside. In 1368, the Abbot Pons de l’Orme of Montmajour determined the abbey should be fortified. A watchtower was constructed, now fully restored it is well worth the walk to the top level (26 metres) for sweeping views of the countryside. 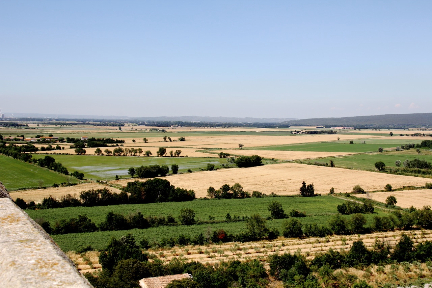 Montmajour had long been a pilgrimage site for those seeking to absolve their sins by visiting the location of the wood relic of the True Cross. It is believed that the Cross had arrived in Arles in the fourth century. The pilgrims were so numerous that the monks constructed the Chapel of Holy Cross separate from the monastery, to accommodate these religious visitors. 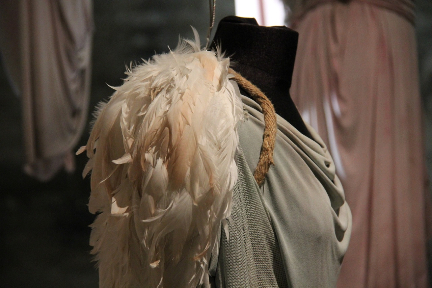 Architecture and history are generally enough to peak Nutmeg’s interest, but this year (until November 5, 2013) there is a collaborative display housed at the abbey. Entitled “Mon île de Montmajour,” the exhibit is the combined vision of fashion designer Christian Lacroix in concert with incredible glass artworks by, artists associated with CIRVA.

Did you enjoy the photos?