Nutmeg has been fortunate enough to visit the Blasket Centre on the Slea Head drive twice, but she has yet to see this view. 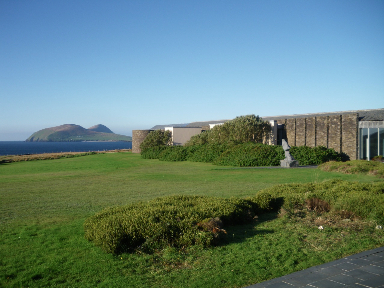 The Blaskets are a group of small islands located just off the coast of the Dingle peninsula in Ireland, the westernmost tip of the European continent. The largest of the islands is called the Great Blasket or An Blascaod Mór in Irish it was inhabited until 1953.

It is believed that millions of years ago the islands were attached to the Irish mainland. The Great Blasket is only one kilometer from land; however, it is far too challenging to attempt that crossing even in smooth water. The safer passage is approximately 5 km, and there are many days where it is not advisable to be out on the open water.

The population of Great Blasket hit its peak of 175 in 1916 after which, the numbers declined steadily to a low of 22 in 1953 when the last residents were evacuated. Official records are unclear as to when the island was first inhabited. It is known that the Ferriter family leased the land at the end of the thirteenth century. It is believed that monks lived on the islands long ago. A ships’ record found in Samancas, Spain confirms residents as early as 1597. Regardless of when the islands were first occupied, there is no question that the inhabitants of this craggy piece of rock were hearty folk.

Island residents were able to forge a meagre existence on a landmass that is 6.4 km in length and only 1.6 km at its widest section. There is a small beach, which is mostly inhabited by seals these days; this still provides the safest location to land a boat.

The original boats used by residents were called seine-boats, which required a crew of eight and were hard to manoeuvre, however, these boats were practical for transporting goods and animals from the mainland. Around 1870, the first naomhóg boat was introduced. This watercraft changed life on the island immeasurably as they could be manipulated with a three-man crew. The naomhóg was better suited for fishing, and nimble enough to land in awkward spots. The wooden frame of the naomhóg was covered in felt, which was then painted with black pitch to create a water resident barrier. 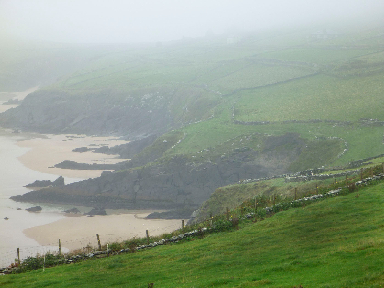 There were no stores on the island and trips to the mainland were clearly weather dependant. As such the residents lived off the land and sea. There were few milk cows, making cream and butter rare commodities at most tables. Sturdy sheep grazed the hillsides their wool used for blankets and clothing, and eventually the meat was sold to merchants in Dingle. Fishing was at first mostly done from shore until the naomhóg was introduced after that fishermen began trolling for pollock and setting traps. Rabbits had free run of the island as there were no natural predators, needless to say, they ended up in the odd stewing pot. Kitchen gardens were limited to hearty vegetables and a few rows of potatoes. Despite the limited diet, the islanders fared better during the Great Famine (1845-52) than mainlanders as they were used to foraging for their food.

The houses were made of stone with thatched roofs made of reeds. These were practical structures built with a single door, and hearths used for both heating and cooking. There was never electricity on the island and very few modern comforts, yet the population was industrious and literary. There are some forty books that were written by the island residents, describing the challenging conditions and their community life.

A striking stained glass piece welcomes visitors to the Blasket Centre. The Journey is the name of this colourful facade that is comprised of 3.5 tons of glass supported by 3 tons of steel. The 300 textured glass panels read as one image. However, once you begin to focus on the detail you see the black outlines of the naomhóg boats, the sandy beach, the island pathways, the green fields, the sea and so many more salient parts of the Blasket residents’ lives. 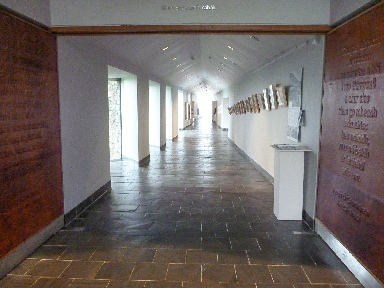 The balance of the Blasket Centre is worth an extended visit. There is a short film with additional detail on the islanders, a model of the island, many artifacts and short bios of some of the residents.

On a good day, you can visit the island via the ferry, hike the same trails that the islanders would have walked with their sheep and visit the remains of the village that once had 30 houses.