Regular G&N readers know Nutmeg cannot resist a market and certainly not if it involves coffee, lunch or both. That is exactly what a couple hours at the English Market in Cork served up. The name may seem a bit odd in the heart of Ireland, but it was the Protestant or “English” corporation, which controlled Cork at the time that created the market. The English Market first opened to the public on August 1st, 1788 predating the election of the first US president. 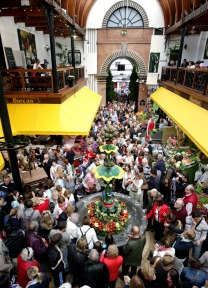 Cork due to its favourable geographic location and natural harbour was a prosperous Irish centre in the eighteenth century. The town was an important agricultural distribution hub, and rigid quality control standards allowed the Cork Butter Market to become the world’s largest market of its kind.

Cork Harbour sheltered British naval fleets during both the American War of Independence (1775-83) and the Napoleonic Wars (1803-15). It was this provisioning activity for the British Navy that was the real impetus for the town’s growth as a trade centre. Exports of beef, pork and butter to West Indian colonies were also critical in a time when Britain continued to expand lands under its sovereign control. 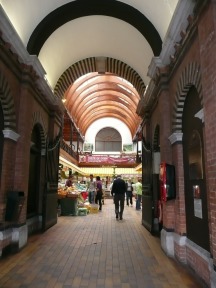 Prior to the late 1700s Cork was surrounded by marshes, waterways and by the high defensive walls of the city; there was no agricultural space within the town. Thus, Cork was dependent on rural Irish residents to produce the animals, vegetables, butter, cream, eggs etc. to supply to the needs for commercial trade. 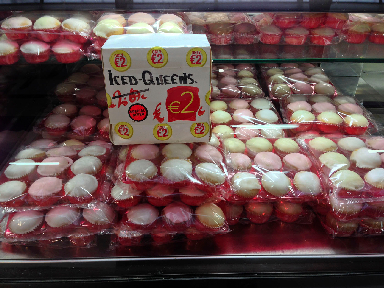 Civic arguments for a centralized marketplace were many, including enhanced monitoring of food for improved health standards. This is understandable at a time when animals were slaughtered in the streets. However, the real reason for a centralized market may have been the prospect of revenue generation for the public purse. The covered market was built, original vendors stalls were reserved for meat, and subsequently, other sections were added including fish, fowl and vegetables. 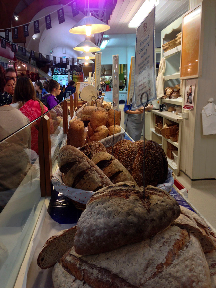 It was not smooth sailing for Cork or the English Market in the subsequent years. The market site was flooded barely six months after it opened. The end of the Napoleonic Wars in 1815 meant the activity of provisioning naval ships dried up and wartime prices plummeted. Cork, suffered from that economic blow followed closely by the potato famine. Somehow the English Market survived all the turmoil though supplies were limited.

The first half of the 1900s were no less challenging to the local economy with two World Wars and plenty of grown-at-home violence. The market was elevated from a nearly abandoned state with renovation work in the 1960-70s, only to be turned to ashes by a fire on June 19th, 1980. A little like a cat with several lives, the market survived, its reconstruction was completed by October 1981. The layout and pedestrian flow slightly improved, and a mezzanine area was added, allowing space for a future cafe. 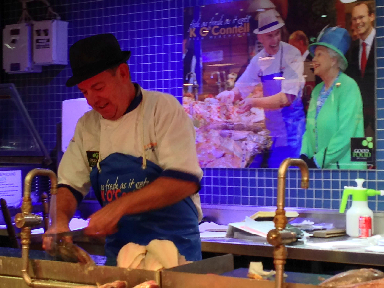 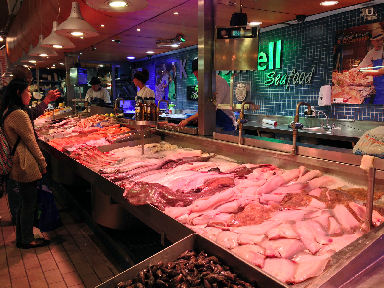 The economic boom of the next two decades along with skyrocketing disposable incomes resulted in a high demand for exotic foods, ethically raised products and culturally diverse options. The English Market now boasts 51 vendors. It is also a spot for famous visitors, Queen Elizabeth II who paid a visit on May 20th, 2011.

Since 1994, the Farmgate Café owned and operated by Kay Harte has occupied the atrium space. The Farmgate’s daily menu is created only after the chef’s morning tour of the market stalls to select the freshest products. The English Market and Farmgate Restaurant are examples of the Good Food Ireland organization’s commitment to local food and focus on the enduring food heritage of this country. 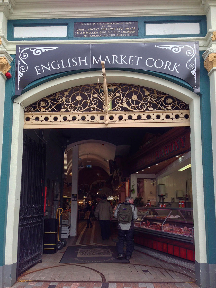 The English Market today is a food hall, a grocery store, a social outing and a tourist attraction. More than anything it is like a stockpot filled with interesting ingredients a place where foodies searching for unique ingredients shop under the same roof as the working class who continue to search out their economical favourites from long-trusted vendors.