Where to Stay in Lisbon – Palacio Belmonte Fit for Royalty

There are only 10 keys to the rooms at Palácio Belmonte yet every key opens the door to the palace. Not everyone will fit the glass slipper, but no one will sleep with a pea in his or her bed. 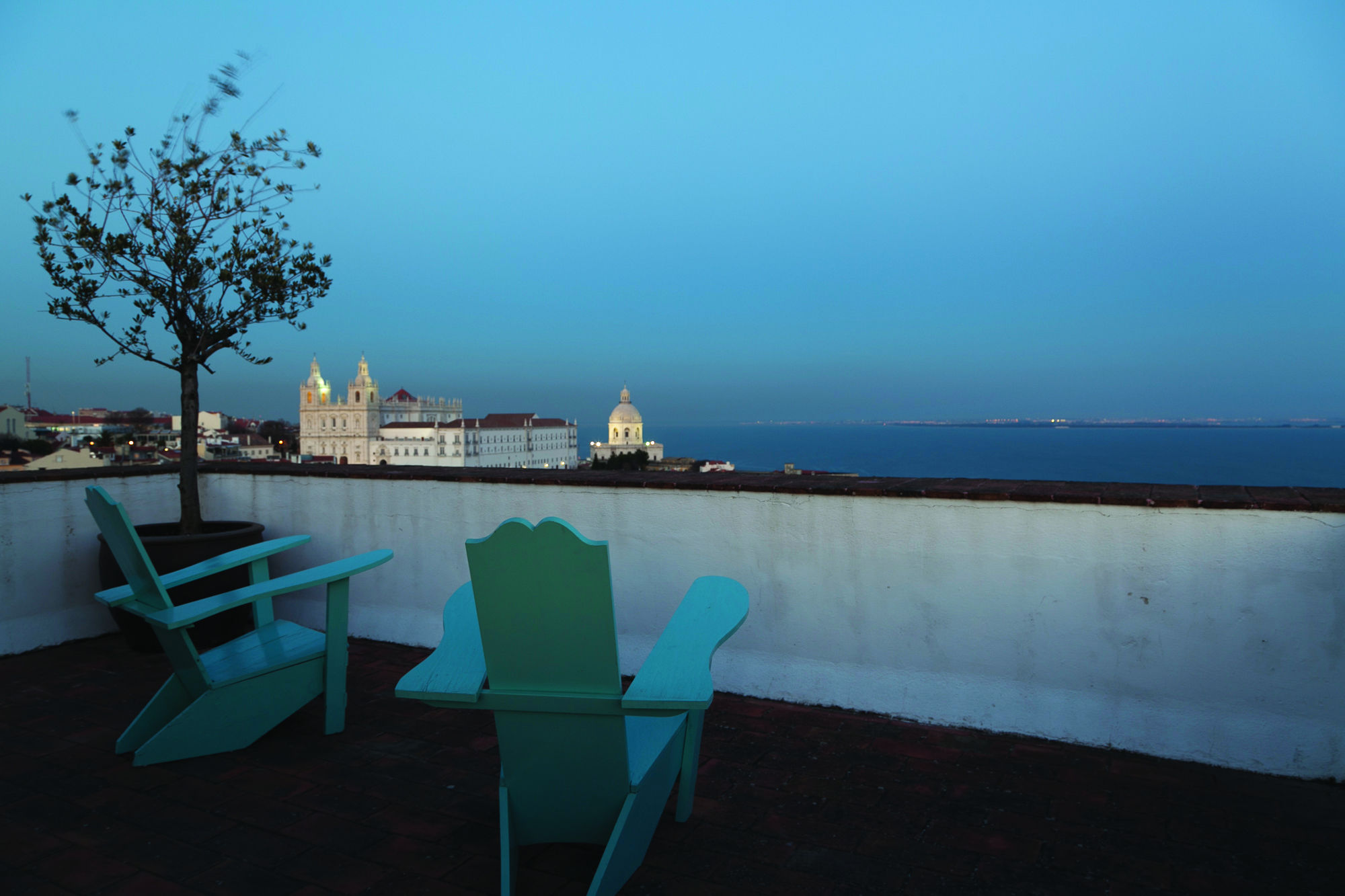 Having made an investment of 26 million Euros in reconstruction and devoted innumerable man-hours to this passion project the owners Frederic Coustols and his wife Maria are justified in their preference for appreciative guests at Palácio Belmonte.

This boutique hotel has literally been raised from the ruins of what was a royal residence for 500 years. Portuguese history swirled by the stone foundations as key members of society hosted their visitors within the palace’s solid limestone walls. The Earl of Belmonte, Cabral and the Marquis of Atalaia each had a moment to call the Palácio Belmonte home. 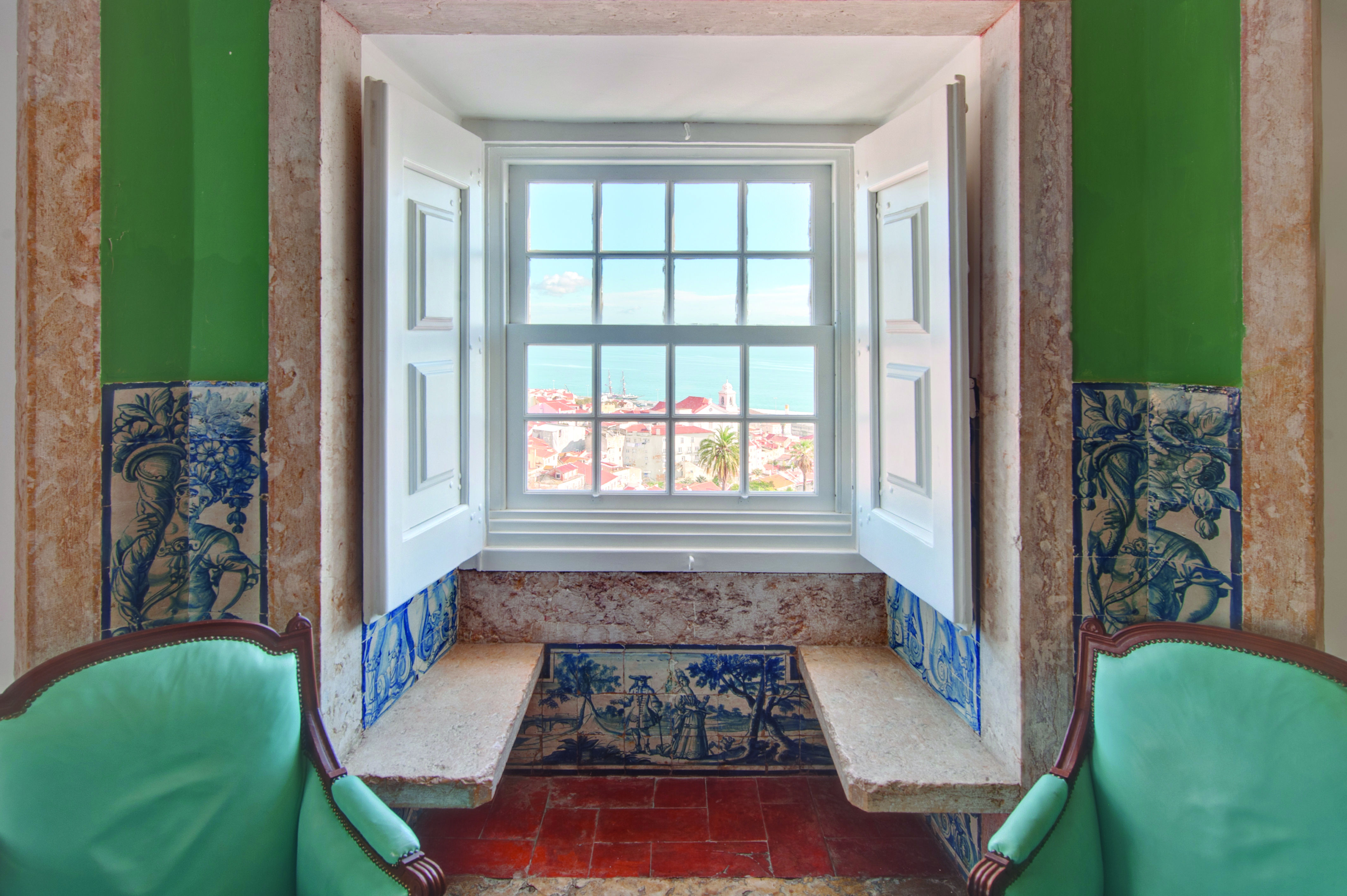 Castelo do Sao Jorge dominates the top of one of Lisbon’s seven hills, a fortified citadel built in the 11th century by the Moors for defensive purposes. Snuggled next to the castle’s impervious ramparts a house was built in 1449. The construction incorporated previous Roman and Moorish structures, three defense towers and a rectangular keep.

In 1640, the grandeur of the palace began to take shape with a sweeping east facing terrace and classically designed facades. In the early 18th century azulejos-masters, Manuel Santos and Valentim de Almeida were commissioned to tell the stories of family events and Portuguese history through the classic blue and white Portuguese tiles. There are 59 panels made up of over 30,000 individual tiles.

As Culture Club Café patrons sip espressos and drink sparkling waters on the uneven cobblestone terrace, they might pause to think what is behind that scarlet door? Who lives there? The Palácio is discrete one must knock or ring the bell to gain entry, yet like the rest of your stay the hotel staff anticipates your every move – before you do. The door buzzed open before we had a chance to ring the bell. The reception clerk bursting with admiration for his workplace insisted that he would give us a full tour when we returned from sightseeing. 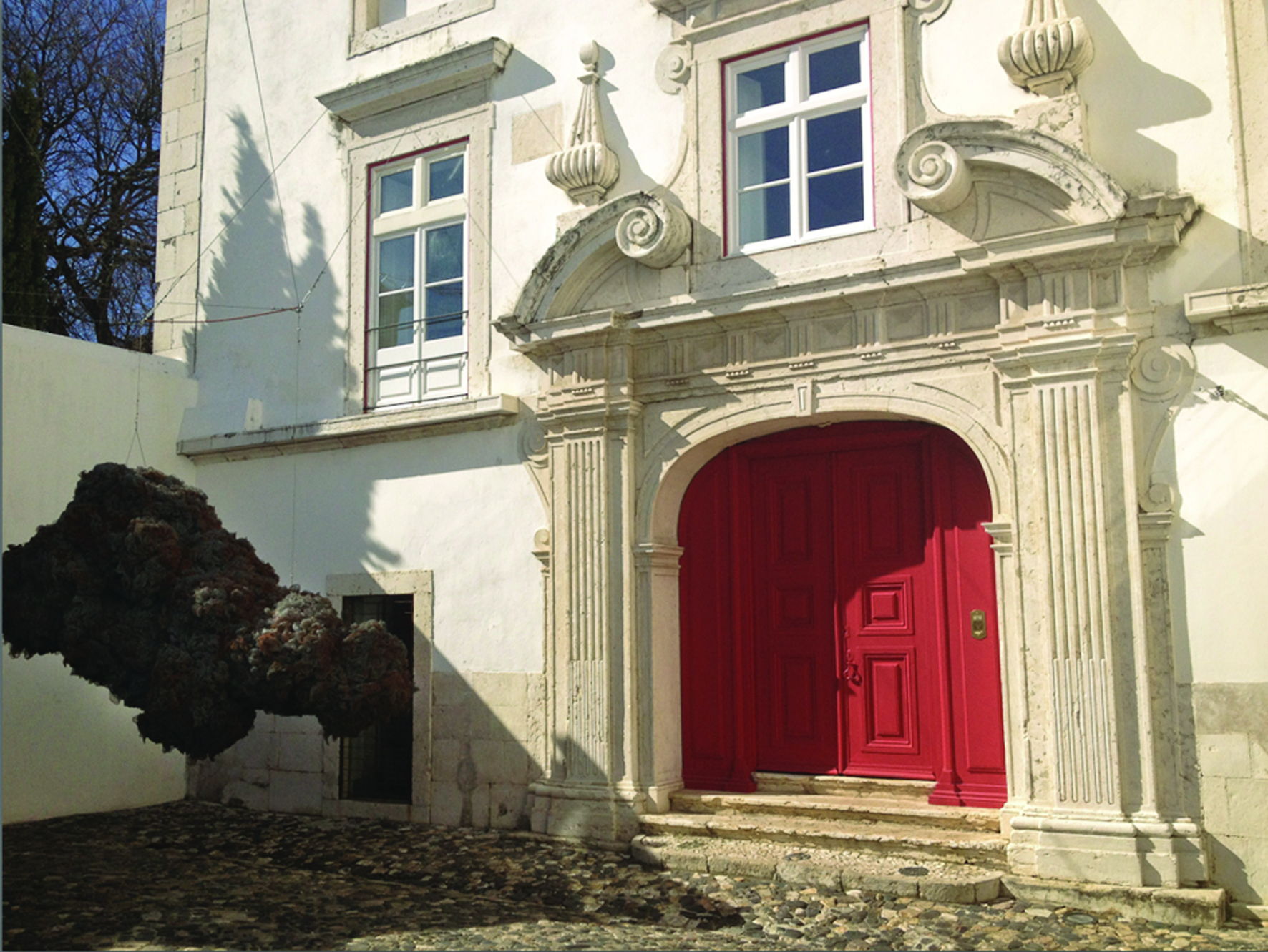 A gentleman appeared his thumb holding open the page in his book. He was chatty and happy to provide a suggestion on a café near the castle as we were headed that way. This was Frederic Coustols the master of the house. An unassuming, overachiever, M. Coustols was born in Gascony in the southwest of France. He may have made his fortune in capital market mergers and acquisitions, but he is following his passion as a Landscape Collector. 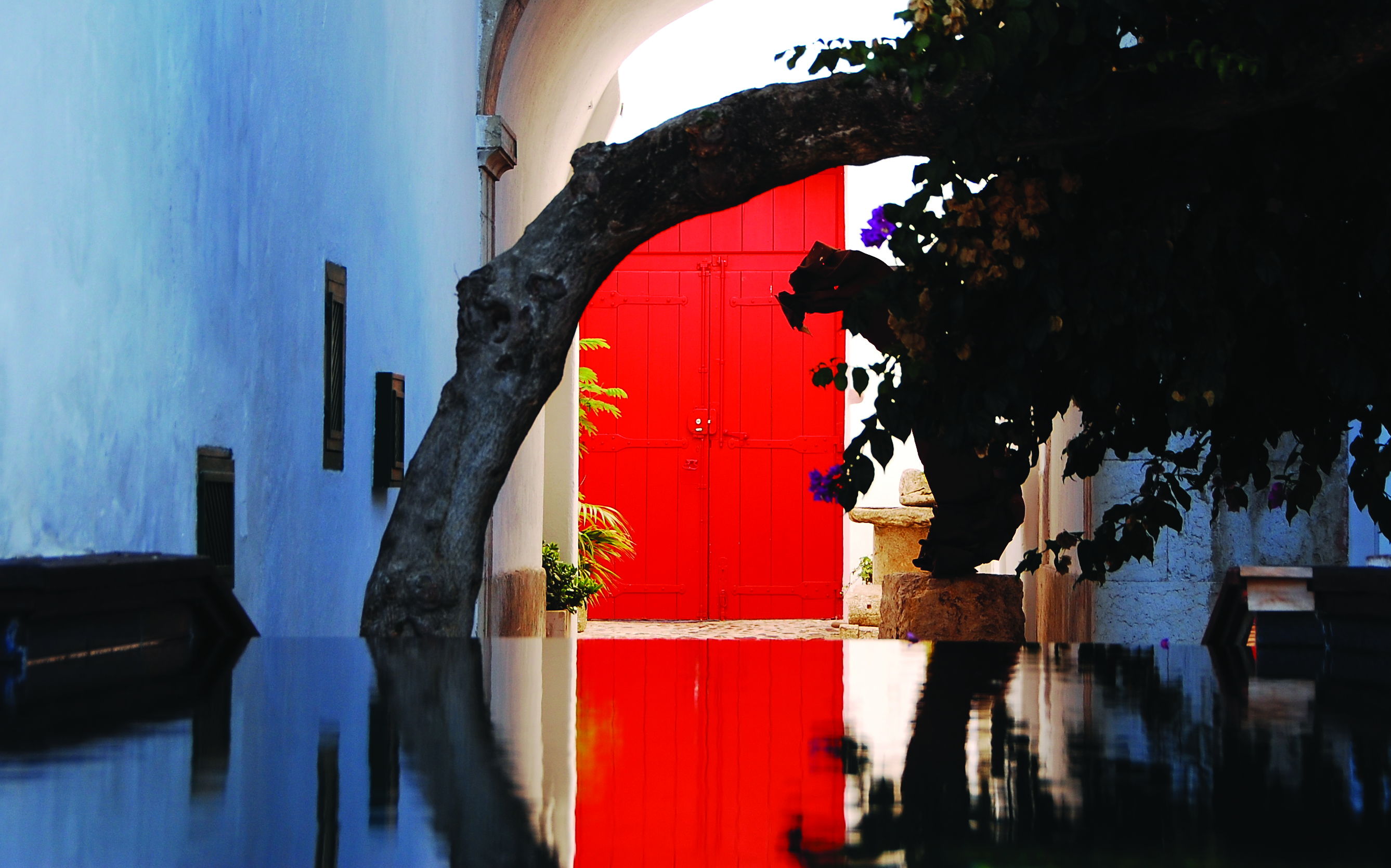 Red was once the colour reserved for noble families in the 15th century. It is also the colour of energy and passion making it the perfect choice for the 4.5-metre entrance door to Palácio Belmonte. M. Coustols purchased the property in 1994 and began a two-year research project with a team of experts. His mandate to the group was that the restoration of Palácio Belmonte was to strictly follow the Charter of Venice and the principles of sustainable development.

Those are the stated principals of the sustainability concept that Frederic Coustols is championing. Design a Sustainable Tomorrow (DaST) a tool for use in each project phase to best connect the use of sustainable materials, regeneration, environmental awareness and urban planning. 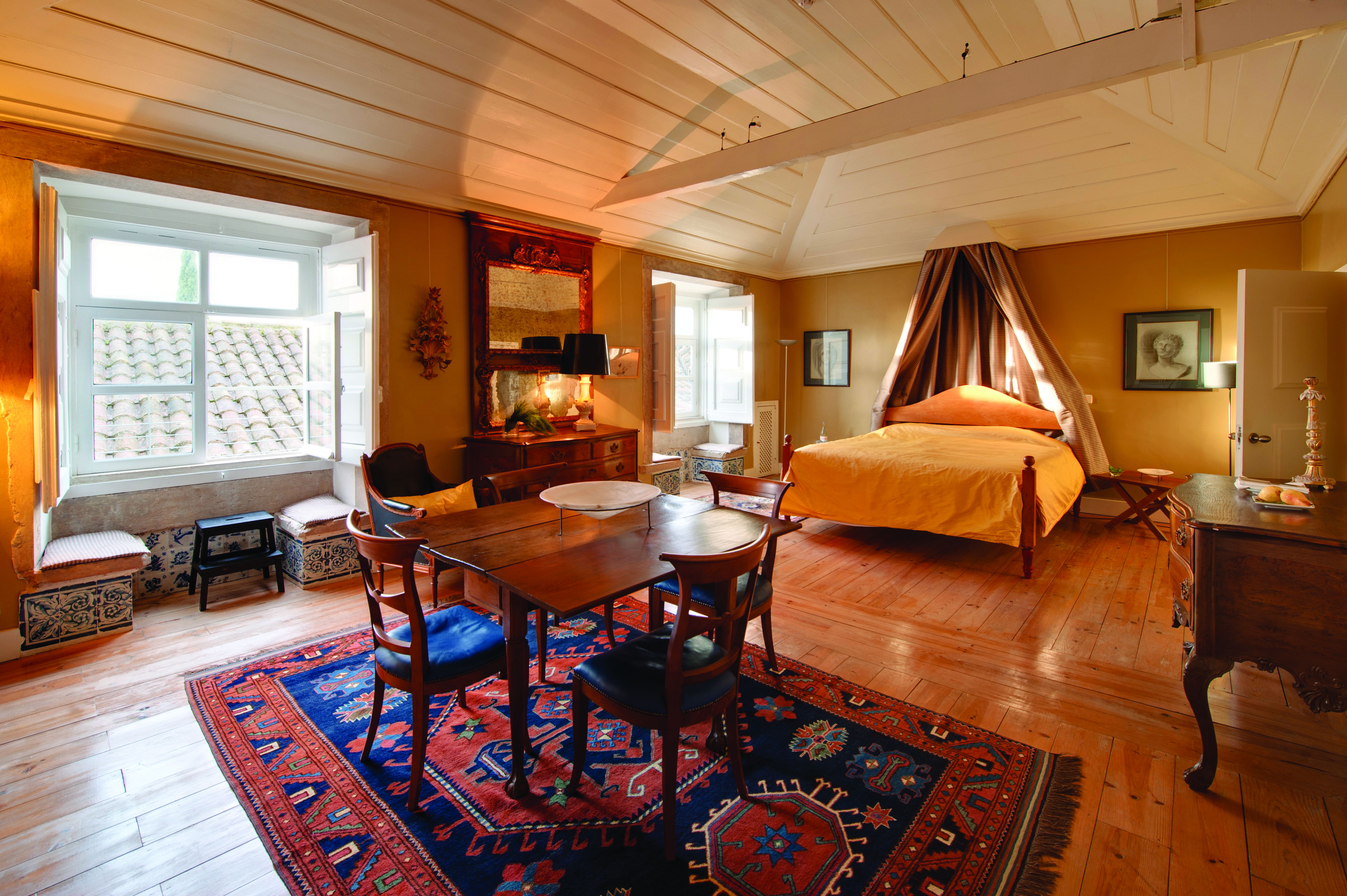 In the case of the Palácio Belmonte, the award winning restoration was nothing short of a six-year Ph.D.. The 30,000 azulejos (tiles)were removed, numbered, restored by artisans and reinstalled using traditional techniques. The wide-plank oak floor in the Maria Ursula Room was refurbished using 15th century pigments. The study of historical documents uncovered the long forgotten “recipe” for Roman architect Vitruve’s lime mortar that adapts perfectly to the damp Lisbon climate.

A key criterion for the project was the palace must be energy efficient. No air conditioning, limited heating and natural ventilation systems to follow the seasons. At some stage during the project timeline Frederic and Maria determined that opening and closing 380 doors and windows every day for personal use were not what they had bargained for. That was the conception point for Palácio Belmonte – a demure boutique hotel.

The Palácio Belmonte is a hilltop sanctuary with sublime city views, private patios, a terraced organic garden and a black marble infinity pool. Guests are invited to enjoy the palace as if it their own. The Piano Nobile and the rest of the building are made up of a collection of spaces to be enjoyed according to your mood. Perhaps you are tempted by a pre-dinner drink or afternoon tea in the bar with a bird’s eye view over the Alfama’s red-tile roofs. Maybe you want to enjoy one of the books from the 4,000-title library embraced by a black leather chair. The possibilities are endless, a private Michelin dinner under the stars or some meditation by the infinity pool. Simply heaven on earth – there are no TVs.

M. Coustols recognized that a hotel by itself is isolated. The Palácio Belmonte project incorporated sustainability from a broader sense. Twenty-two local tenants were displaced during the construction phase, they returned to refurbished, rent-controlled apartments. A once rubble-strewn passageway has been opened, inviting Alfama street-vibe to stroll by the crimson door and enjoy a moment in the Culture Club Café. 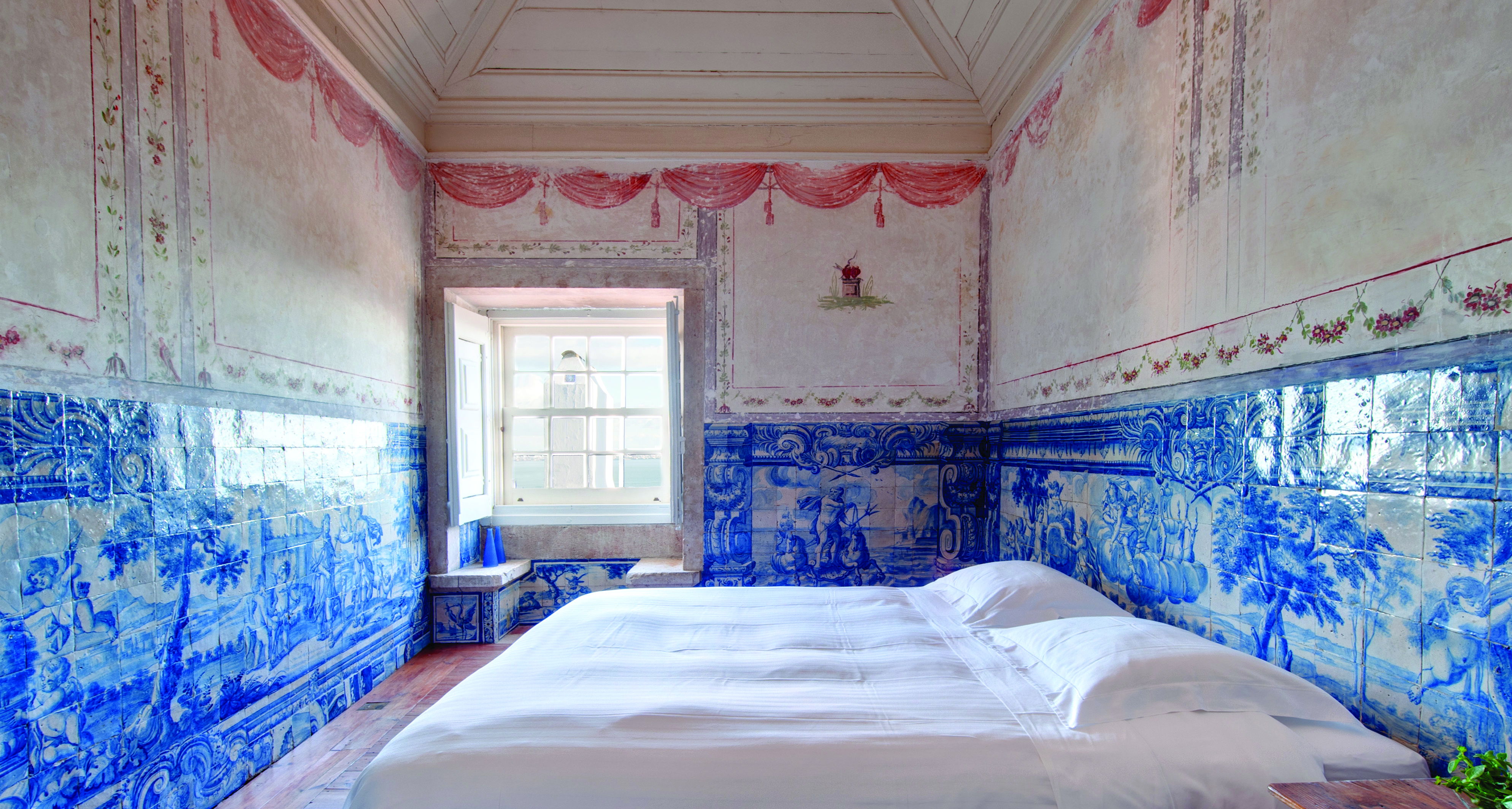 Frederic Coustols maybe an ecologist, but he is also a practical financial mind. His significant investment will never produce a sensible return with only 10 suites. He has recently secured the necessary approvals for a 2800 m² (28,000 ft²) expansion. A project expected to cost 30 million Euros. The vision for the next phase will allow for private ownership of the 24 new suites within the master plan of the larger palace.

Image Credits: All photos were provided by and published with permission from Palácio Belmonte