Nutmeg agreed to accompany Ginger to the medical clinic in Arles so he could get a yellow fever vaccination for his Africa trip, but only of they could visit Alyscamps afterwards.

Alyssii campi is Latin for Elysian fields – the road leading to the kingdom of the dead. 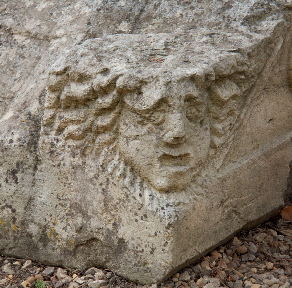 During Roman times, it was believed that the living and the dead existed in different worlds. Burials were not permitted within city limits. The net result was that roads on the outskirts of major settlements were often lined with tombstones. In the case of Arles, there were five necropolises, situated on each of the main roads leading to this commune.

Alyscamps or Aliscamps in Provencal was the most famous of the five. It was Arles’ main burial ground for almost 1,500 years. Located just outside the walls of the ancient town. Although, not too physically distant from the Roman arena and theatre, the burial site would have certainly been a world apart from the lively productions held in those buildings. 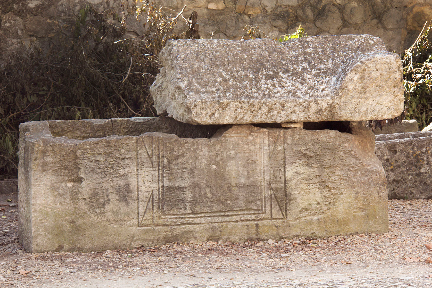 This Roman necropolis was situated on the final segment of the Aurelian Way, a road that connected Rome to Arles. From approximately 250 BC onward sarcophagi (stone coffins) and elaborately carved memorials became the final resting place for many of Arles wealthy citizens.

Legend has it that around 250 AD, a Roman administrator by the name of Genest or Genesis, refused to sign the death sentences targeting Christians. Persecuted for his actions, he attempted to thwart the Roman soldiers by swimming across the Rhone River. He was captured and beheaded. Buried in Alyscamps his cult status became legendary, as miracles are believed to have occurred shortly following his interment. Subsequently known as Saint Genest, countless pilgrims and the wealthy alike from all parts of Europe, sought to be buried under his protection.

In addition, the first bishop of Arles, Saint Trophimus was also buried in Alyscamps, imparting additional prestige on the site. Relics of Saint Trophimus and other artifacts can be seen in the Musée départemental Arles antique today. 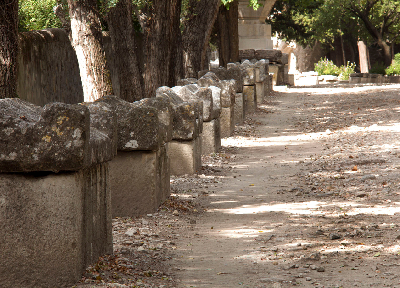 At one time, Alyscamps would have stretched much further than the site’s current boundaries. The hallowed grounds have shrunk to what is now visible due to looting during the Renaissance, and the 19th century installations of railway lines and a water canal.

A little beyond the ticket booth are the remains of the Church of Saint Césaire-le-Vieux. A broad walkway, named l’Allée des Sarcophages is lined on both sides with the remains of stone tombs. This pathway leads you past a restored gardeners house and the consuls’ monument. 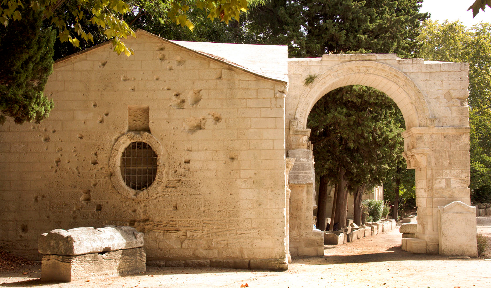 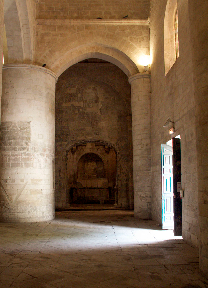 As you stroll along the poplar-lined path towards the semi-restored Saint Honorat’s church, reflect on the fact that the view is vastly different from what would have existed during antiquity. In the middle ages, Alyscamps would have been much larger; there were 19 churches and chapels on the site where two barely exist today.
What you see now is similar to that which would have inspired the canvases by Vincent Van Gogh and Paul Gauguin in October 1888. 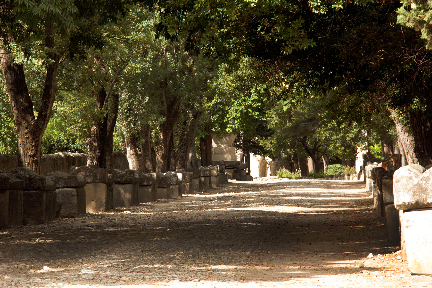 The Alyscamps necropolis is worth a visit, it is not too crowded, and you are able to tour at your own pace. On a sunny fall day in Provence, the locale continues to inspire painters as evidenced by the number of easels scattered throughout the site during Ginger and Nutmeg’s visit.