L’Abbaye du Thoronet was first classified as a historic French monument in 1840. Restoration work started the year after and still continues today. Nutmeg wanted to visit the Thoronet Abbey as they had already seen the “sister” abbeys Silvacane and Sénanque. The straightforward design of these buildings produced volumes of space where the only adornment would have been the harmonic chanting voices of the monks. These religious structures are stark and somber yet at the same time refreshing, no marble, no gold, no organ pipes, just natural light and acoustics.

The abbey is located on a remote property in the Var Department of Provence, at the base of a densely, treed valley not far from the Cote d’Azur, but certainly miles removed from the present-day glamour on the coast. Raymond and his wife Étiennette (Stephanie) des Baux donated the land to the monks in 1140. Raymond-Raimbaud des Baux was a direct descendant of the House of Baux, a noble French family. During medieval times, his family was extremely influential in Provence with extensive land holdings from Berry and Vienne in central France, to Marseille and beyond along the coast. 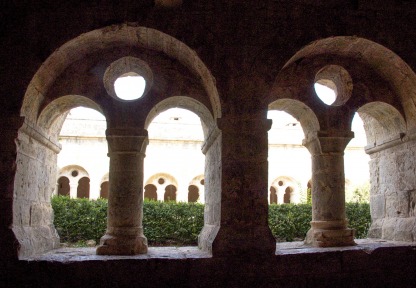 This place was ideally suited for the Cistercian monks who practiced a pious existence with limited external distractions, few material possessions and a strict regime of prayer, study and worship. Robert de Molesme at Cîteaux near Dijon, in Burgundy, founded the Cistercian order in 1098. Here is some detail from Wikipedia:

“In 1098 Robert de Molesme founded a “new monastery” at Cîteaux in Burgundy, as a reaction to what he saw as the excessive luxury and decoration of Benedictine monasteries, under the direction of Cluny. He called for a stricter observance of the Rule of St Benedict, written in the 6th century, and a sober aesthetic which emphasized volume, light, and fine masonry, eliminating the distraction of details.”

His philosophy quickly gained in popularity, when he passed away in 1154 there were already 280 monasteries in France and by the end of the 12th century some 500 existed.

Architecturally the abbey is an embodiment of those underlying principals. The stone church is austere, there is no superfluous adornment – no decorative distractions. Yet the traditional Latin cross design with a tall nave and three bays give volume and a lofty feeling to a structure that otherwise might be oppressive. Monks and lay brothers were the ones to use the church; there were two modest entrances, one for each group.

The location of the Abbey of Thoronet offered remote privacy for the monks. The property was ideal, with a small river and a reliable spring, water sources necessary for cooking, washing and milling. In addition, the region provided access to fertile land for agriculture and animal husbandry. The buildings on site, the church, tower, cloister and mill were all constructed in the 12th and 13th centuries. Unlike other projects, the abbey construction occurred in a narrow timeline and as such the buildings flow architecturally together as one. 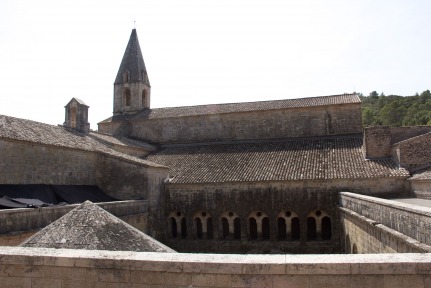 The abbey finances relied upon donations and proceeds from the sale of agricultural products produced on the extensive land holdings. Meat from sheep, honey from beehives, fish from the Mediterranean, salt from coastal ponds and handcrafted cheeses were some of the products, sold at local markets, to sustain the abbey’s operations. 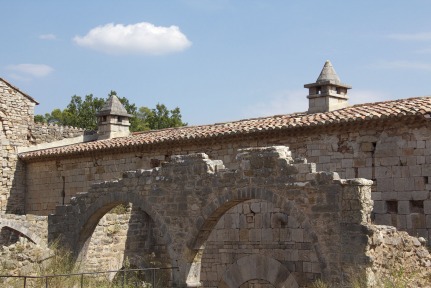 At the peak of activity, there were about twenty-five monks who lived and practiced their faith at the abbey. It was the lay brothers, minor monks from lower classes, who did all the “heavy lifting” around the property. Early in the 14th century the decline had begun, the Black Plague of 1348 devastated the population of Provence and impacted the abbey, as well. Unfortunately, even with the apparent wealth of agricultural resources the finances were not sustainable. By 1433, the number of monks had plummeted to only four. The abbey was largely abandoned during the Wars of Religion and in 1785 was officially declared bankrupt. 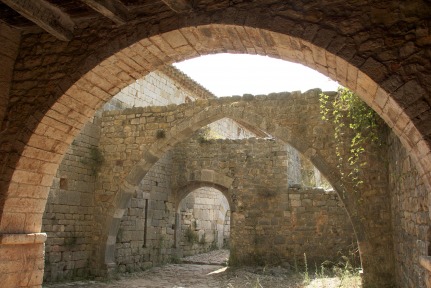 As a result of the restoration work, the abbey church, cloister, dormitory and cellar are all in good condition. The site is well worth a visit.