Is the data from twenty-four US Government satellites circling the globe correct?

Could the information provided from map-reading “back-seat” drivers be more precise? 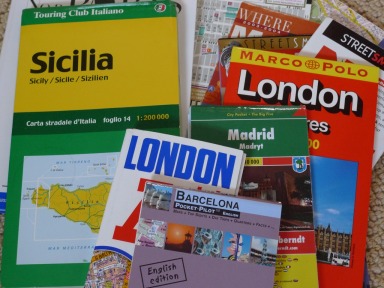 The Global Positioning System (GPS) used to be only available to military types and space-techie nerds. Today, this navigational system, is freely available to anyone possessing a device with the functionality. Which is pretty much everyone, at an estimated 560 million GPS enabled devices in 2012. The US government satellites orbit around the earth providing essential signal information in order to determine your position.

For you technical folks here, are some explicit details from Wikipedia:

GPS satellites circle the earth twice a day in a very precise orbit and transmit signal information to earth. GPS receivers take this information and use triangulation to calculate the user’s exact location. Essentially, the GPS receiver compares the time a signal was transmitted by a satellite with the time it was received. The time difference tells the GPS receiver how far away the satellite is. Now, with distance measurements from a few more satellites, the receiver can determine the user’s position and display it on the unit’s electronic map.

Ginger and Nutmeg would not survive their time in France without the car’s built-in GPS. The somewhat stern, female voice they have nicknamed “Claire” due to her slightly British accent.

Generally speaking, Claire has been an indispensable travel companion on the several thousand kilometres in different cities, small towns and unfamiliar locations. She solved the potential issues between “pilot and navigator” without the need for legal intervention or a marriage counselor.

However, there were a few times when frankly Claire is good for nothing.

Tunnels are a little confusing to Claire. Which can be a problem if you are travelling through Northern Italy, where there are more tunnels than open roads.

There is a fundamental problem with a GPS, the tool works best if you input exact details. So, a bit like the phrase “garbage in, garbage out” that was the net result at times.

Of course, Claire cannot be realistically blamed for the time when Nutmeg’s parents forgot the name of the village where they had all agreed to meet for lunch…she needed some information.


Ginger and Nutmeg have found out the hard way that sometimes GPS directions may at times omit seasonal conditions — as they headed down a treacherously icy back road after a long day of skiing. How was Claire to know that it was winter? She had simply been asked to find the fastest route.

A few of Nutmeg’s favourite “Claire” sayings are below

Back in Calgary Ginger and Nutmeg are “at home” so who needs a GPS?  Wrong! Claire is sorely missed despite her minor faults; new roads, new communities and new routes have the twosome dreaming of their trusty driving companion. On their return trips to France, they try to give Claire full credit for her hard work related to global positioning.