Celebrity chefs flaunt their talents with teetering food towers, seared this and that, and sous vide experimentation, but they still rely heavily on spices to perfect the flavours.

Ubiquitous today, as the world’s most traded spice, the black peppercorn was once highly sought after for both its flavour and medicinal qualities. As Romans increased use of pepper in their cooking, savvy Spice Route merchants commanded gold and silver coins in exchange for the seasoning. This was not unreasonable as peppercorns had to travel long distances from Southeast Asia – parts of India and Java.

Pepper and many other spices were used to mask the flavour of meat that may have gone beyond its “best before date”. The Guild of Pepperers were importing peppercorns to the United Kingdom by the tenth century, and many European kitchens had spice mills by the 14th century.

Pepper is still a heavily traded commodity, with close to 20% of all global spice-trade by dollar value. The tiny country of Vietnam is the world’s largest pepper producer at over 30% of the total volume. Admittedly, Nutmeg had never actually considered where peppercorns come from until a friend pointed out a California pepper tree.

These are tall trees growing as high as 50 feet (15m) with a sturdy truck, the branches and soft fern-like leaves create welcome cover in hot weather. The pepper tree is ideal for desert climates as it is relatively drought resistant. The tree’s branches sweep towards the earth like those of a weeping willow, a calm, cool oasis under a scorching sun. 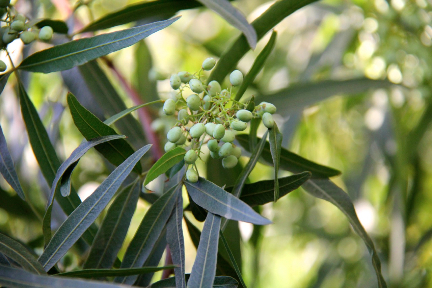 Minuscule flowers evolve into tiny circular fruit, these are drupes (like olives) they contain a single seed. Left on the pepper tree to full maturity the fruit turns pinkish/red. The crop from these California pepper trees is generally known as a pink peppercorn – see below.

Thanks to the talents of recognizable chefs, cooking has evolved into alchemy with a focus on fresh ingredients and flavour enhancement techniques. Nutmeg prepared the following reference list for your next trip to the spice aisle (as the choices can be overwhelming): 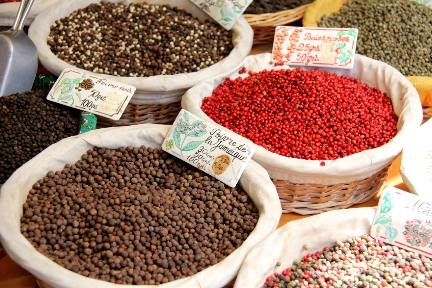 Black pepper is derived from the unripe, still green fruit. The drupes are cooked briefly in boiling water, and then allowed to dry. During the drying process, the exterior skin turns black and wrinkles. The piper nigrum (Latin for black plant) vine produces the black, green, white and tellicherry peppercorns.

Green pepper is picked as per above and then treated with sulphur dioxide, freeze-dried or pickled to preserve the green colour.

White pepper comes from the mature red berries. Once picked the fruit sits in a warm place and starts to ferment, this ten allows the red skin to be rubbed off. The result is a smooth round white kernel. White pepper is used heavily in Thai cuisine.

Tellicherry pepper is allowed to ripen to red on the vine, and then processed similar to black pepper.

Pink pepper (baies roses in French) comes from a different plant, the tree that grows in California (see photo above), Florida and other southern states. Baies Roses are tiny red berries (not drupes); these are mild in taste and best purchased from a reputable vendor as there are many toxic varieties. Sometimes these berries are combined in commercial pepper blends. The tree originates from South America where this spice features in Peruvian cuisine.

Long pepper (sometimes known as the Indian long pepper) is used in Asian cooking and in oils for medicinal purposes. When dried the spiky black seed is about half an inch (2cm) long. The pepper trapped the inside hard exterior is only about the size of a poppy seed, but makes up for its small size in heat. It is much hotter than regular black pepper.

Jamaican pepper is a larger berry from the Pimenta dioica also known as pimento or allspice.

Melegueta pepper grows in West Africa, at times described as the “grains of paradise,” and sometimes called the alligator pepper; it is a spicy peppercorn, with citrus tones.

Are you a pepper fan?