Ginger and Nutmeg have an on-going debate. Actually, it is not a debate because there is little discussion. Nutmeg admits she is a Francophile, give her the choice between BBQ Alberta beef and steak au poivre the French sauce wins. She listens to Radio Canada when she is driving, her reasons include the fact that the news programming is often better than other stations and listening to French (despite sometime horrific accents) is good training. Ginger is quick to order BBQ Alberta beef and switch the radio to CBC.

Nutmeg thought she would enlist the help of a friend at Frantastique (online language training), to help settle their non-debate. The following are 5 Reasons to learn French: an unbiased and objective list: 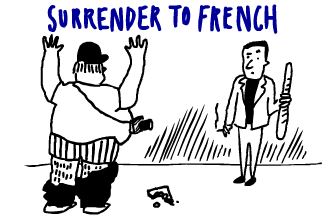 Let’s face it, anyone who tells you that learning French is an essential part of the changing global landscape is either French himself, or trying to sell you something. That doesn’t mean that speaking “la langue française” isn’t cool, cultured and a hell of a party trick however. With French in your arsenal, you’ll certainly turn some heads at the discotheque, the bistro, the bedroom, and especially the bidet.

What is the real draw of this language though? How will it make you a more sophisticated and thus a better person – more suave, more cultivated, with lower hygienic standards? That’s the question that we’ll attempt to answer with something exceedingly rare on the Internet these days, a top 5 list. 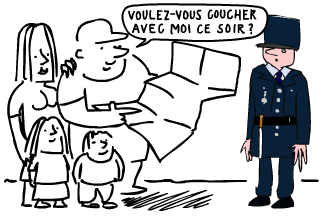 Voulez-vous coucher avec moi…ce soir is great and everything, but 9 times out of 10, saying this line in earnest will earn you a solid slap to the visage. Why not start doucement with some sexy, slightly absurd French songs with profound lyrics (paroles)?

Phase 3 (la nuit): At this point, the only reasonable reply from any would-be chéri(e) d’amour should be the following: “Maintenant, viens !***”.

Either that or a punch to the visage. So, you want to learn French now? Still unsure? 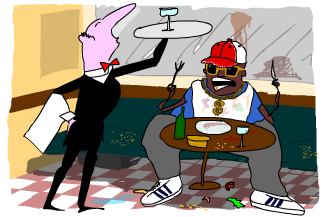 There’s nothing classier than ordering a pie à la mode at your local fast-food establishment, but every aspiring bon vivant should know that with just a handful of French terms, you can take your bistrot game to the next level. Start your evening with an apéritif, then move on to an amuse-bouche. By this time, your mouth should be so amused that you’ll barely have room for the pièce de résistance. A quick trou normand should help you find a second wind, just in time to go tête-à-tête with a planche de fromage. Cap off your soirée with a digestif, before heading to an after-dinner fête, where the drinking can begin in earnest. Bonus: if you’ve been using all these words during your meal, your date may have even transformed from a “peut-être” to a “oui oui”. Bon appétit, you little connaisseur, you.

Reason #3: Plan your honeymoon to Gabon 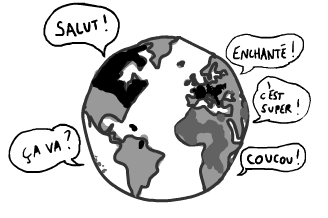 Did you know that French is spoken outside of France? We were skeptical at first too, but thanks to France’s glorious colonial history, French flows freely in 29 countries officially, and many more unofficially.

Ouagadougou ain’t your thing? Why not honeymoon to a country that doubles as a tax haven. Monaco, Luxembourg and Switzerland are perfect for all your sketchy financial transactions – No questions asked.

Still not sold? With French at your disposal, you can finally make the trip to the ultimate exotic destination, the jewel of the Americas: Canada. Time to brush up on your bonjours, eh? 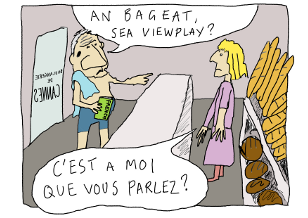 There’s a very thin line between pretentiousness and refinement, and learning French will put you firmly in both camps. To achieve the coveted status of Monsieur or Madame Je sais tout, however, you’ll need to master the basics of le cinéma français. Film is after all an art invented by the French, according to the French (les frères Lumière).

Try casually slipping the terms Nouvelle vague and Cinéma verité into your next poker game. Did anyone run away or spit on you? Good. You’re halfway there. Carefully, cautiously, while protecting your private areas, mention Truffaut’s mise en scène in Les 400 coups, or Godard’s handheld camera shots in A bout de souffle. Feel free to use the term chef d’oeuvre. No derisive laughter? No punching? You’re well on your way to becoming an insufferable critique, the pride of your local cinémathèque. You want to know how it happened? Because you dared to learn French – the language of cinema snobs. 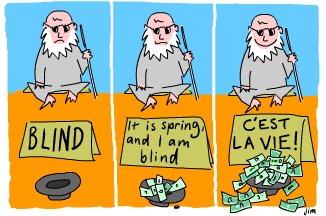 By now you probably want to learn French for a variety of legitimate reasons. Reason numéro cinq makes the least sense, but c’est la vie –  you’ll have carte blanche to use a delightful mélange of French expressions into your English conversations. So, without further adieu (yes, we know that’s wrong, but we’re just warming up), everyone settle into your favorite chaise longue, enjoy an apéritif and listen up. Dig deep into your armoires, and reach for some joie de vivre. Make one final trip down your favorite cul de sac and give your au pair the bonus that he or she desperately deserves. As with all things French, these random words will add class, spice and a hint of confusion to any dialogue. Suggestions below:

Bobby: “Say Harold, à propos of nothing, I’m en route for a dégustation chez Jane. Would you like to come along?”

Harold: “Thanks but no, Bobby. Jane is my bête noire. I can’t stand her laissez-faire attitude. Besides, I didn’t RSVP. ”

Sarah: “What the hell are you two idiots talking about?”

Et voila, you’re now part of the avant garde. Another solid reason to surrender to French.

If this top 5 list has taught us anything, (not certain), it’s that French is more than a language – it’s an attitude. An attitude that will have a powerful impact on all aspects of your lifestyle. In fact, it wouldn’t be hyperbolic at all to say that learning French is a choice to become a better person. Ok, maybe a little bit hyperbolic. But this is a safe place; we can admit that French has an appeal that goes far beyond a simple desire to communicate for business or pleasure. You want the whole package that French brings: the nonchalant world view, the lax stance on infidelity, their progressive views on sexuality, their seeming inability to gain weight while eating and drinking anything and everything, and of course that inescapable impression of simply being superior. Who wouldn’t want that? Exactement.

So dépechez-vous, and learn a tongue that will do nothing less than transform you into the proud French coq that has been hiding inside you for years. Now that you might be thinking about exploring a second language check out the details for Frantastique here.