Returning to Visit to Must See Uzes

Would Nutmeg be interested in a girl’s getaway to Uzès?

As if, anyone needs to escape Provence. 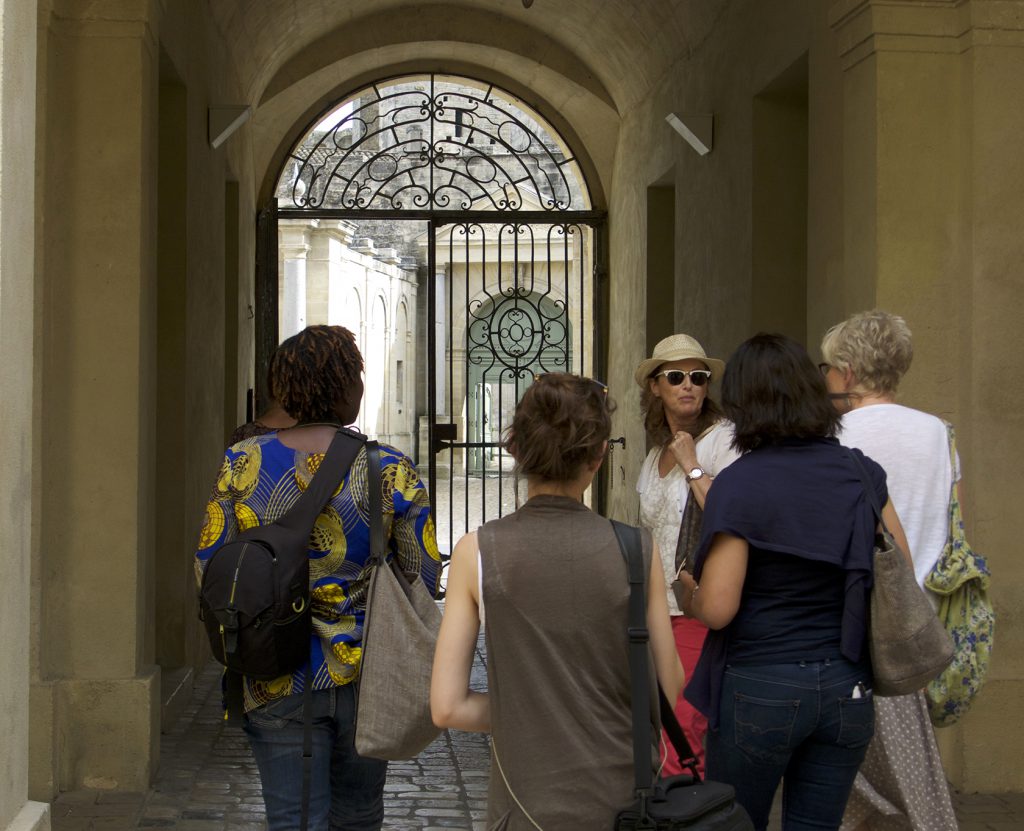 The proposed itinerary was to include a short visit to Uzès in the Gard. Many visitors who venture westward in Provence to see the Pont du Gard aqueduct, the amazing restored Roman structures in Nimes and the ancient walled city of Uzès, might not even realise they had crossed a regional border. The boundary today is indicated by a road sign, in the Middle Ages, it was marked by bloody religious and territorial battles.

Languedoc-Roussillon-Midi-Pyrénées is a vast region in Southern France, which covers a swath of territory (almost 73,000 km2) stretching along the Mediterranean to the Spanish border. The Départment de la Gard falls within that mega-region. 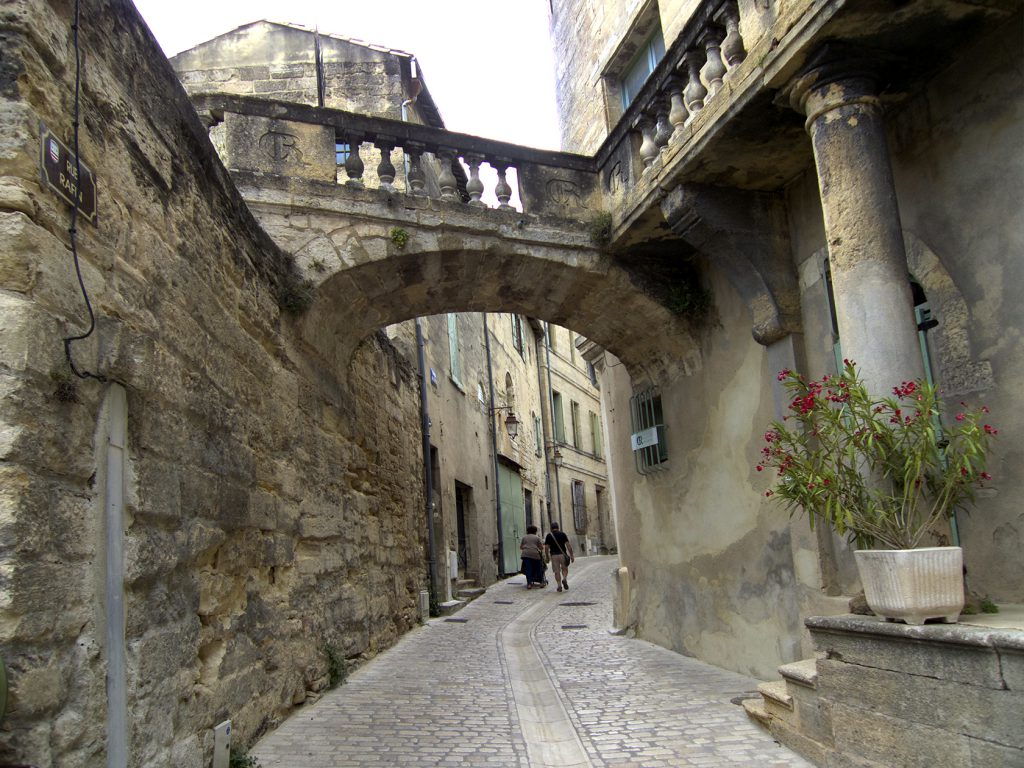 Uzès has a permanent population of 8,200 with at least double that many bodies during the height of tourist season. High walls surround the remains of the medieval town these were erected to shelter inhabitants from invaders. Although the ramparts no longer serve as protection, the stone fortifications provide a slight buffer from the noise of snarled traffic on the ring road.

Inside and outside the walls of Uzès there are secrets to be told and many that remain to be discovered.

Was there a tunnel from le Duché (Duke’s Residence) to Place Aux Herbes?

What happened to the traces of the Romans?

Why are there balconies in the Cathedral?

What was the village like during the French Revolution? 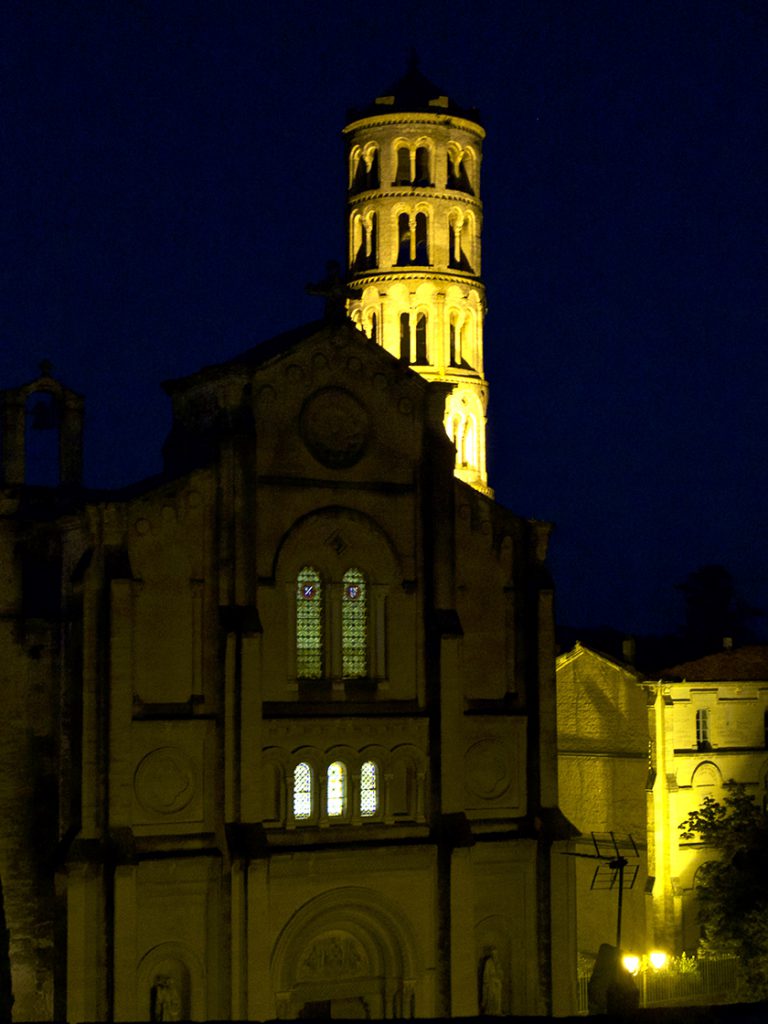 This was not Nutmeg’s first trip to Uzès, but rather an opportunity to rediscover the charming medieval town with its strategic hilltop position above la Vallée d’Eure (Eure Valley). Food (grain, grapes, olives) and livestock (sheep and goats) continue to flourish on the fertile fluvial plain as they would have during the Middle Ages. The Romans identified the source of the Eure River as the starting point for their massive hydro-engineering project to transport water over the Pont du Gard to Nimes –  50 km away. 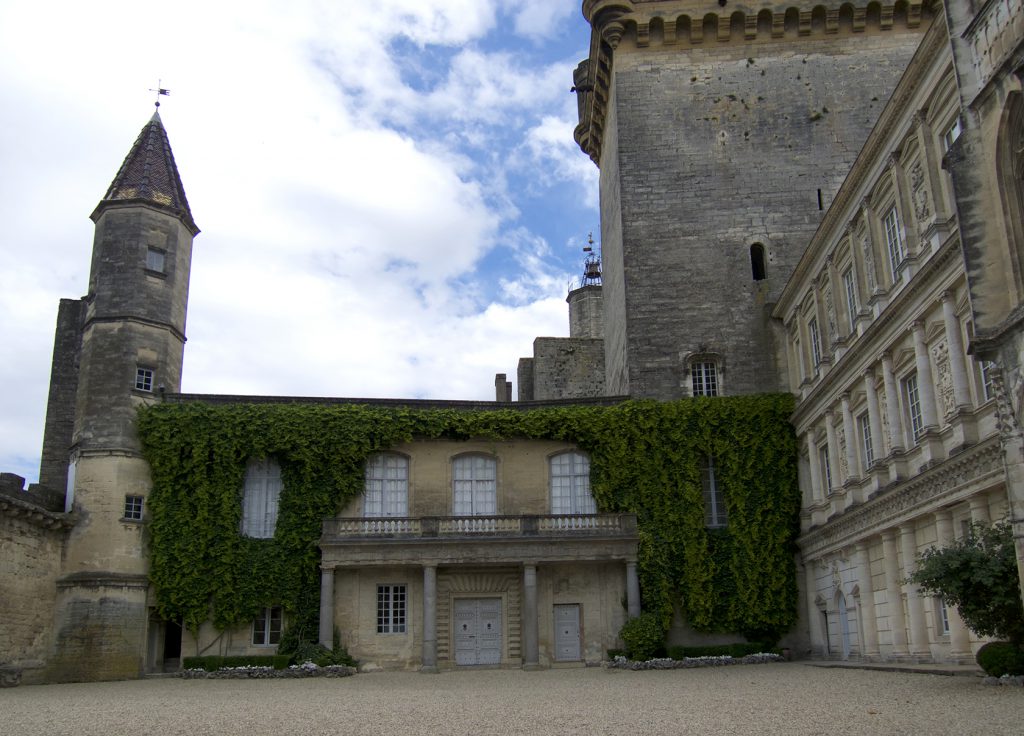 The Duchy is open to the public for guided tours daily, except for Christmas day. However, the castle’s structure would be a contemporary architect’s nightmare. A military fort with its 12th century Bermonde Tower, ramparts and guard’s turrets were built upon a Roman castrum (camp). The old construction abuts a 16th C renaissance facade and a Gothic chapel. After the French Revolution the Château du Duché was in deplorable condition, the Crussol family returned but were required to buy back their castle from the town (1824). Much restoration work has been on the interiors and exteriors in the last 150+ years. 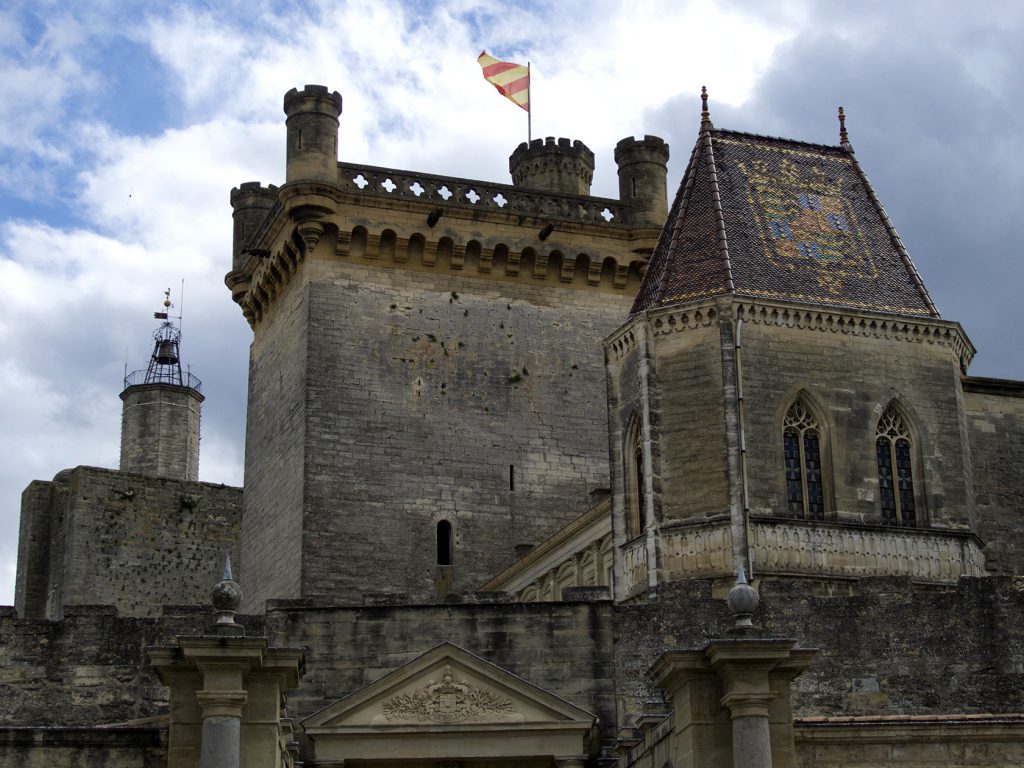 Tucked behind the Duchy are medieval gardens, where after visiting the tiny garden plot, you can climb the King’s Tower (100 steps) for a panoramic view of the town and the surrounding agricultural land. 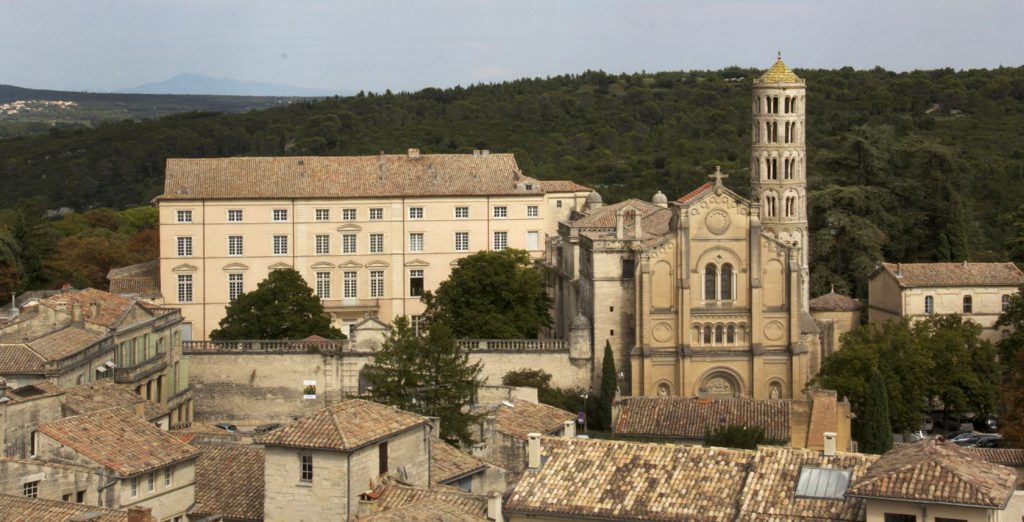 The terrace in front of the Cathédrale Saint-Théodorit d’Uzès also provides a vista point over the valley. The Cathedral itself has been rebuilt three times, not terribly attractive on the outside there are some interesting peculiarities on the interior of the church – the original organ, the rot iron balconies and the chapel with its restored frescos. The Tour Fenestrelle, Uzès’ leaning tower of Pisa, and the bell tower (campanile) are the only remaining original sections of the church. 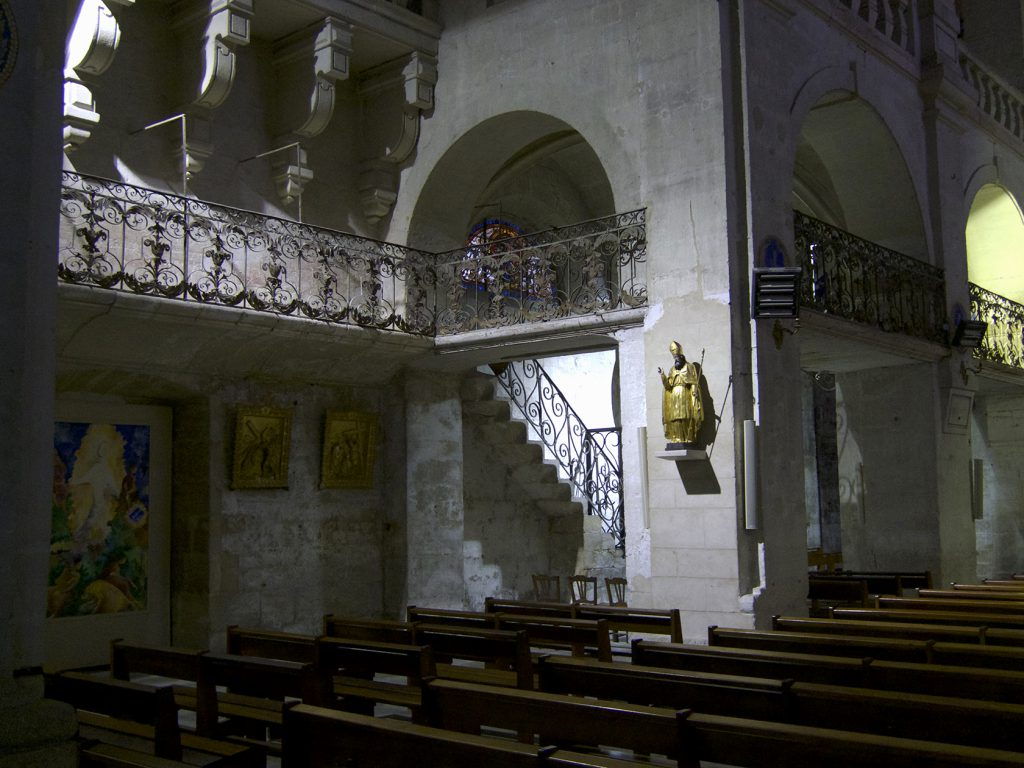 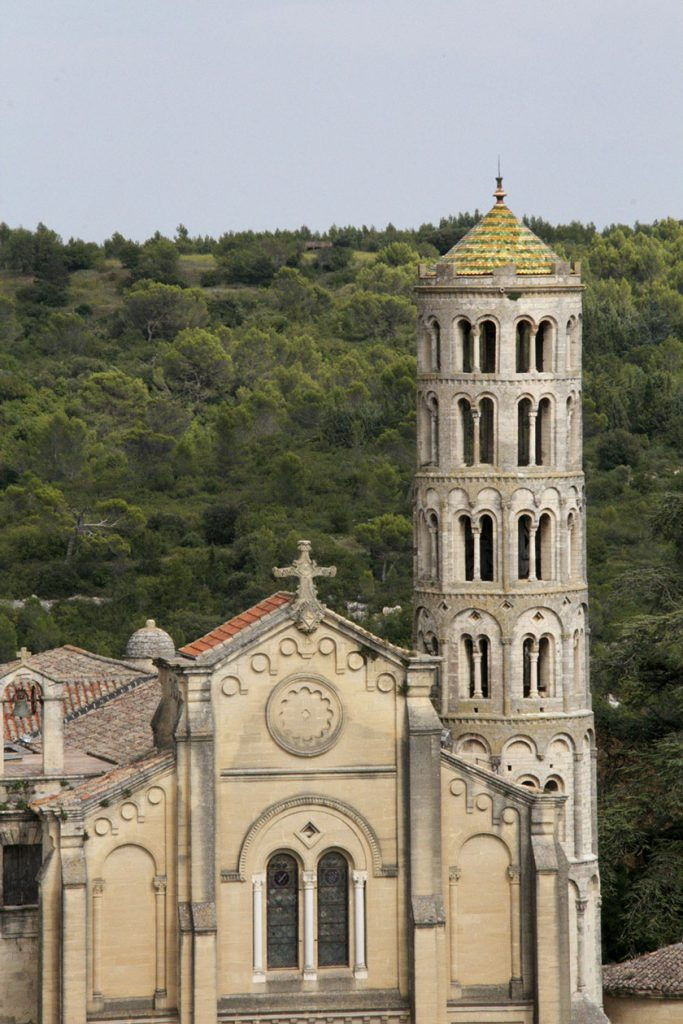 Uzès is known for its bustling Saturday market in Place aux Herbes. During peak holiday times, you can expect the plaza to feel much like you willingly chose to stand in a sardine can. According to local Debbie Bine (The Barefoot Blogger), the Wednesday market allows much more “elbow ” room.

The ancient streets of Uzès have been renewed along with many buildings; the village was one of the first towns to have benefited from French state funding for restoration and preservation work. Where shops during the Middle Ages would have existed under the arches of the Place aux Herbes, boho chic stores and artisan gelato now fill the alcoves. Smooth cobblestones have replaced the dirt and squalor that dominated medieval streets.

Uzès is a chic destination with boutique hotels, a variety of restaurants and charming retail shops. Well worth a visit. 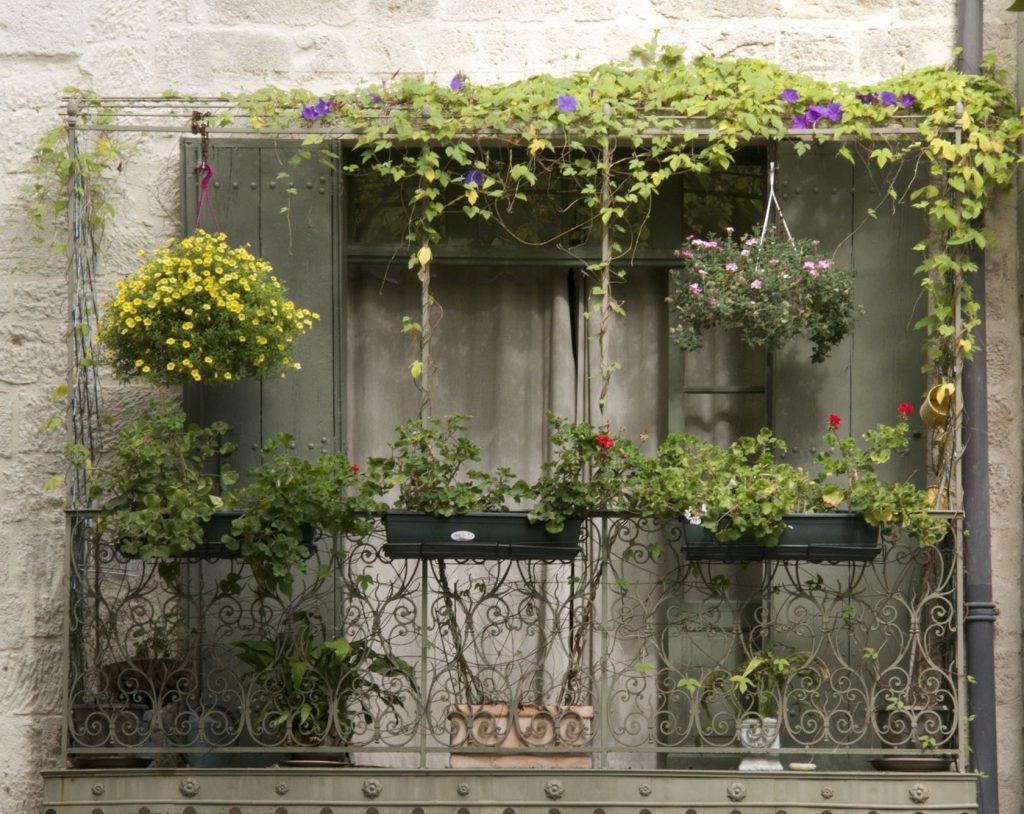 Resources for your visit:

Parking: There are several options for parking around the town, but watch the signs for how long your meter lasts.

Eat: There are many alternatives for tastes and budgets in this reference guide.

Stay: The tourist office can provide some assistance for your stay. Uzès has a range of accommodation options from B&B to luxurious boutique hotels. However, it is best to book in advance.  Splurge? Book at la Maison d’Uzès. 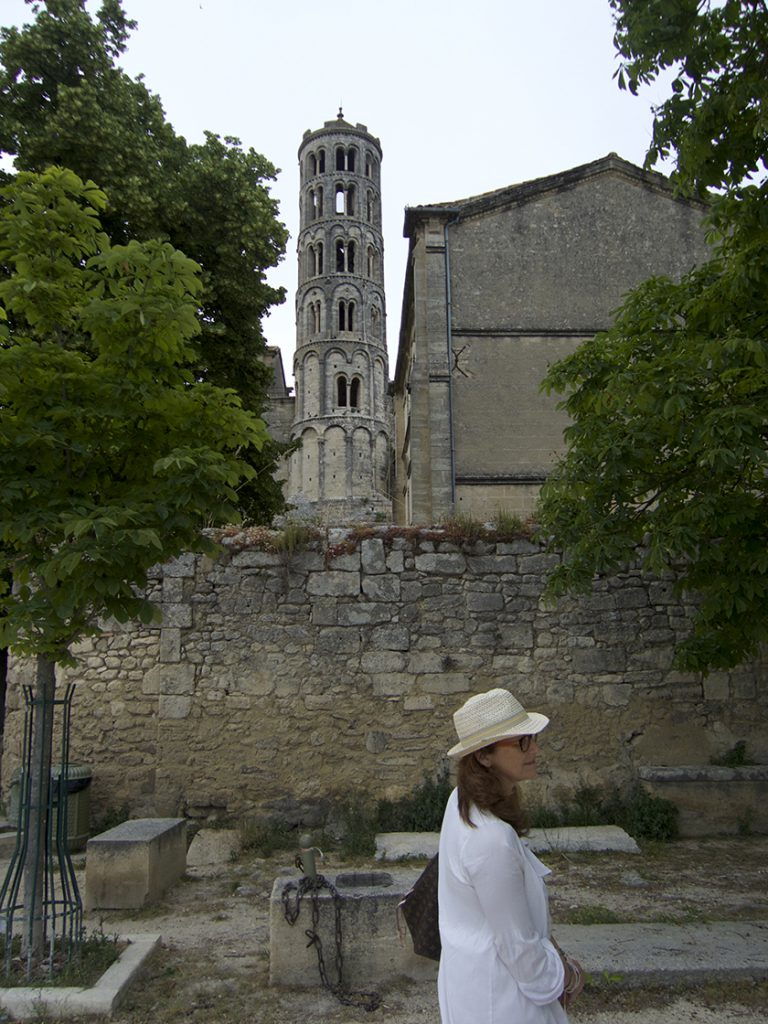