Pablo Picasso at Rest near Aix-en-Provence

Château de Vauvenargues is located in the village by the same name, a few kilometers from Aix-en-Provence. This castle has a lengthy history.  The present structure was built on the site of a former Roman settlement. Over the centuries, Provencal counts and then the Archbishops of Aix occupied the castle. Clearly, it pays to be the doctor of a king; in 1474 Roi René gifted the Château to his physician Pierre Robin d’Angers. 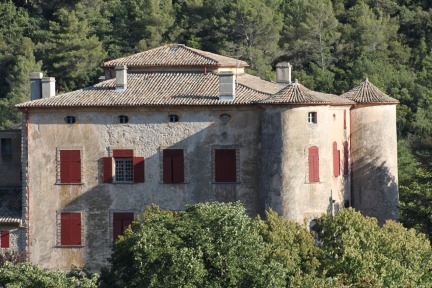 The land and buildings changed hands over the centuries that followed. In 1929, Château de Vauvenargues was added to the directory of French historical monuments. The Isoard family sold it in 1943, after 150 years of ownership. Unfortunately, the buyers striped the rooms of historical furnishings and wall coverings. The property was in a state of neglect, when Pablo Picasso purchased the remote bastide in 1958.

The pays de Cezanne, and Mont Sainte-Victoire held much inspiration for Pablo Picasso, who idealized the works of his forefather Paul Cézanne. The Château de Vauvenargues is found, literally at the base of the beautiful and iconic mountain, featured in numerous works by Cézanne. The Spanish artist, Pablo Picasso so loved the place, that he was convinced it would be his last home. Picasso had by that time (1959) achieved tremendous notoriety as a prolific and avant-garde artist. His bold, innovative, artistic style continues to drive the demand for his works today. 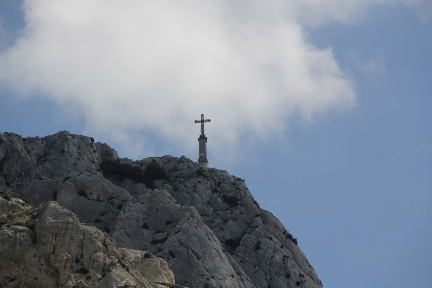 Picasso was so certain that this tranquil location would be his final home that he arranged to have many of his works (bronzes and paintings) delivered. His wife Jacqueline Roque did not share the same feelings for the isolated, shaded castle. In 1961, they relocated to Mougins on the Côte d’Azur, where Picasso lived until his death at 92 years of age on April 8, 1973.  The town of Mougins was not interested in having the famous artist buried on his property. Instead, Jacqueline arranged for Picasso to be buried on the grounds of Château de Vauvenargues, with a view of his beloved Mont Sainte-Victoire.

The Château de Vauvenargues is certainly iconic in this small village of barely 1000 people. The fortified structure stands alone, apart from the town. Picasso loved the place for the isolation that it provided for his work. After his death, Jacqueline proposed that the castle become a museum, the village never approved the idea.

In 2009, Catherine Hutin Jacqueline’s daughter opened the site to the public for the first time. The bronzes, paintings and other pieces of Picasso’s collection have almost all been removed. What endures today, are a few, sparsely furnished rooms. The master’s studio is left frozen in time, just as it was at the time of his death. The walls are barely adorned except for a whimsical painting by Picasso, of a faun in the bathroom. There remain a few token bronzes from Picasso’s collection and a few gifts from his mentors Matisse and Chagall. Ginger and Nutmeg’s tour of the castle, included the exposition of several of Picasso’s etchings, he completed 347 in 1968 alone. The engraving process is complex, detailed and the results engaging. 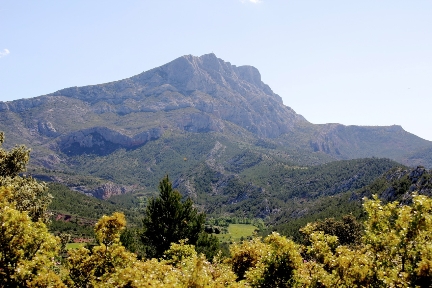 The grave where Picasso and Jacqueline are both buried is an unassuming mound at the front entry of the chateau. There are no markings typically found on a burial spot, instead there is a bronze called Woman with a Vase, a second casting of his sculpture from 1933. The bronze was influenced by Picasso’s Spanish heritage was chosen by Jacqueline for her husbands’ resting place. Picasso, finally at rest (au repos), in the shadow of Mont St Victoire in the heart of the Pays de Cezanne. 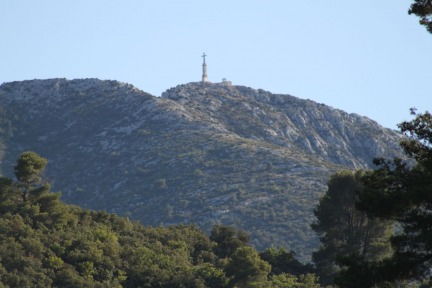