At the mouth of the Petit-Rhône in the Camargue, you find the seaside town of Saintes Maries de la Mer.  It is located right on the Mediterranean Sea, with a lovely long beach and wild surf.  The town was built between the 9th and 12th centuries and was a strategically important location for defense against pirate attacks.  The church (Notre-Dame-de-la-Mer) is unique in both structure and height, as it is much taller than the surrounding buildings. The roof of the church at one time, served as a watchtower. Even to this day, the church is a site for Gypsy pilgrimages.  Gypsies come from all over Europe every May 24th to come to pray to Saint Sara and usually leave an offering of cloth from their clothes for her to protect them through the coming year.

This town in the heart of the Camargue, is home to black cows, white horses, red rice, and the recognizable Fleur de Sel.  The region has a strong tradition of bull rearing and herding that dates back to the late 1800’s when Folco Baroncelli a descendant of a Florentine family settled in the Camargue.  His passion for bulls moved him to become a manadier and in 1895 he founded the “Manado Santenco” in Saintes Maries de la Mer.  In 1909, he established the “Nacioun Gardiano” and was very active in the development and promotion of the Camargue bull-run.

Ginger and Nutmeg were invited to the very unique Festival D’Abrivado, which is held in Saintes Maries de la Mer every November 10th and 11th.  Here are the fast facts: 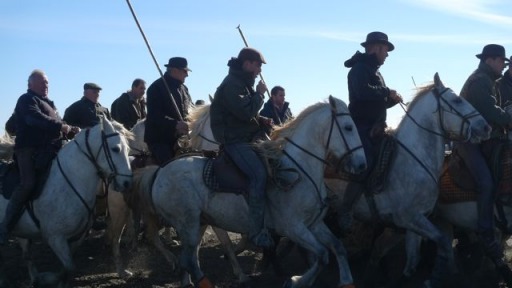 Our friend, Jean Charles wondered if we could arrive at his Uncle’s place by 08:30 to witness the loading of the bulls. “Bulls” Ginger responded “what kind of bulls?” Jean Charles response was wild, fighting bulls. This caught Ginger’s attention, especially when Jean Charles said once the bulls were loaded they would the get the horses ready. Nutmeg raised an eyebrow, perplexed are we going to a bullfight? No, said Jean Charles we are going to the beach to watch the bulls escorted down the shore by “les gardians”. The first question to ask is how long is the beach and where is best place to watch from? He responded that the beach was at least 4km long and provides many good vantage points to watch the riders and bulls. The full cattle drive would be approximately 6km along the beach. How many riders and horses? Well there could be as many as 2000 riders on that beach that morning. Ginger realized this is going to get really interesting!!! Jean Charles pointed us in the right direction and said start walking you will know the right spot when you get there. He then went to find his horse.

Cars lined the roadways, all the way into town. We had at least 2km to get to the beach, and then another 2 to 3 km to get to a good vantage point along the dunes. We darted into town and grabbed a coffee and croissant. The bar/terrasse we stumbled upon for coffee was gearing up for something big. People were already drinking beer and Pastis, and the set-up resembled that of a Calgary “cowboy” bar during Stampede. Deux noisette (espresso with a little milk) s’il vous plait, was more our speed at that time of day.

With Jade the travelling hound, we walked out to our vantage point on the beach with our friends. Our route passed by hundreds of camper vans and parked cars. It was like a massive ‘parrot-head’ gathering prior to a Jimmy Buffett concert, with no need to import the sand! The scene was the French equivalent of a tailgate party, with better food and wine. The anticipation was building, as 11:00am had come and gone still with no sign of the riders or the bulls. What we did not realize was that the riders and their charges still had to cover about 2km before they even came into our sight.

By 11:15am the “Abrivado” (or roughly translated the arrival) had begun. All of a sudden, with sirens wailing, the first of 11 teams came into view riding along the beach. What we saw emerging up the beach was a team of the fabulous Camargue white horses with their respective riders in a tight formation, enclosing the bulls in the center. For each team there have to been at least 20 riders called gardians (cowboys) protecting 4 long-horned bulls. The teams ride at a reasonable trot, and once they get close to the crowd, spectators try to spook the horses in an attempt to release the bulls. It is test of horsemanship to keep the horses in check and together, for if a bull escapes carnage would prevail!

A total of 11 teams participated in the day on November 11th. The event lasted about an hour and a half, then the crowd filtered towards town to celebrate in the festivities. The coffee bar from earlier, had transformed into a massive street party, with close to 1000 people hanging out. We found a restaurant for a lunch of paella and taureau (bull) stew.  The town was rocking and the party was likely last late into the night. Nutmeg negotiated an early departure before Ginger got too ensconced in the festivities. Back to Aix, trusted hound exhausted in the back, and satiated Ginger in the passenger seat. An honest taste of French Stampede, it reminded Ginger of home.  Hey Jean Charles when is the next Abrivado and do you have an extra horse?

Click this YouTube Video:  Abrivado in Saintes Maries de la Mer so you can FEEL the action.