Delphine the owner of Crêpes, Cidre et Companie, in Aix en Provence, is a lovely blend of Spanish roots and a childhood spent in northern France. Her Bretonaise heritage is recreated daily in the tiny kitchen at 23, rue de la Cépède in Aix. Her crêpes and galettes (savoury crêpes) are made with love, and she does not skimp on ingredients – lots of butter, whole milk and eggs. You can read more about her crêpes here. 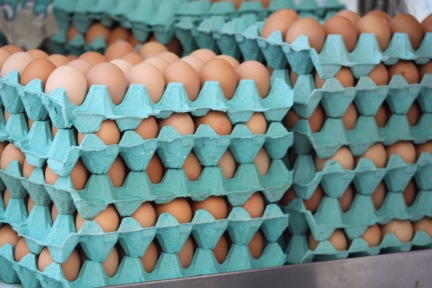 Delphine serves some other traditional treats from her hearth. There are usually (if not sold out) delicious, buttery cookies and sometimes if you are very lucky a slice of her traditional Far Breton. This dessert from Brittany is a tasty delight somewhere between a flan and a pudding. A Far Breton is similar to a Clafoutis or a Fiadone from Corsica. The key ingredient, much like for perfect crêpe batter is flour.

Far is the word for flour in Brittany. With origins as a savoury dish made with buckwheat flour, Far Breton was traditionally served with roasts in the 18th century. As tastes changed and refined products became readily available the recipe evolved into the sweet dessert that is enjoyed today.

Pictured below is the final product. 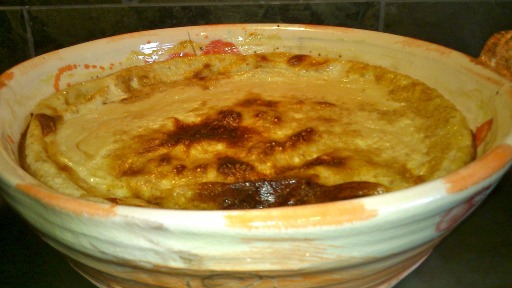 Print
Far Breton From Brittany
Recipe type: Dessert
Cuisine: French
Prep time:  10 mins
Cook time:  55 mins
Total time:  1 hour 5 mins
Serves: 8-10
The recipe is very simple. It is best to eat Far Breton slightly warm, the day it is made, as it can get a bit dense when it cools. The flan can be made with pitted prunes or apples. Delphine makes hers with prunes, so that is the one that Nutmeg attempted.
Note: (in France sucre vanillé is sold in packages, you can make your own with a vanilla bean and white sugar or use one teaspoon of vanilla extract – not too much as you do not want the batter to change colour)
Ingredients
Instructions
3.2.2499